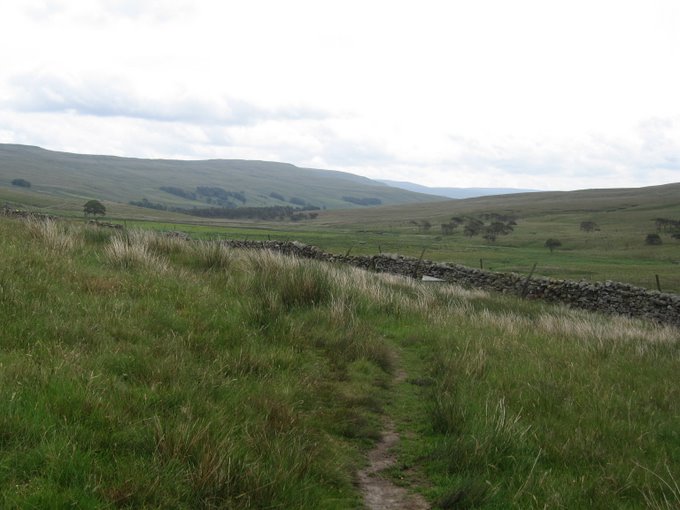 The next day whilst having breakfast we listened to the weather report and the strong possibility of heavy rain. It was time to say farewell to Steve ready for his long journey back home and to say goodbye to Mary & Kevin, the owners of this superb B&B.

As Steve drove off it was onwards & upwards to Outershaw for me, then over Cam Moor and

up on to the Pennine Way. These pictures are looking back across the moor where I’d just walked.

Along the Pennine Way towards Ribbleshead Viaduct I had occasional chats with other fellow walkers and then headed across the fells on the Ribble Way. Walking away from the viaduct towards Cow Gill, Dentdale, were more fantastic views of the Dales.

Following the long descent to Cowgill, I crossed the River Dee and on to the Sportsman Inn for my next overnight stop. We had, what can only be described as the largest breakfast ever seen by man, put in front of us. We couldn’t eat it all which was a waste.

As we set off it started to rain, which lasted all of ten minutes or so. We followed the River Wharf to Starbotton & Buckden

stopping for a refreshing pot of tea, now in sunshine.

We then made our way to Hubbleholm to the 12th century church which is well worth a visit.

The Dales path runs behind the church and as we were walking along the river we could this elderly lady up ahead, alone as we thought, looking to be in some kind of bother. As we drew closer we could see an elderly man lying on the ground and I thought he had probably collapsed or something worse. As we reached him we could see he was holding a video camera with a sound system and when we asked him if he was OK. he told us to be quiet! It turned out he was making a home documentary about wild orchids.

He wanted Steve & I to lie on the ground to pretend we were from an orchid’s society and had found a rare orchid, and he wanted to film us taking photos of the flower.

Up for a laugh we lay down with the camera whilst the gent videoed us. We stayed for about three minutes then went on our way and with the elderly gent still trying to tell us what to look out for, we waved a hasty goodbye.

Further up the path we met somebody walking the opposite way, from Bowness to Ilkley, and he was looking a little tired so we stopped to enlighten him about the orchid film director which brought a smile to his face.

So back on track we headed along the River Wharf

And this is what we walked all the way from Ilkley for, a view like this:-

AND, yes, we got our scones – a whole delicious plateful. Not only that we also enjoyed a most sumptuous evening meal. 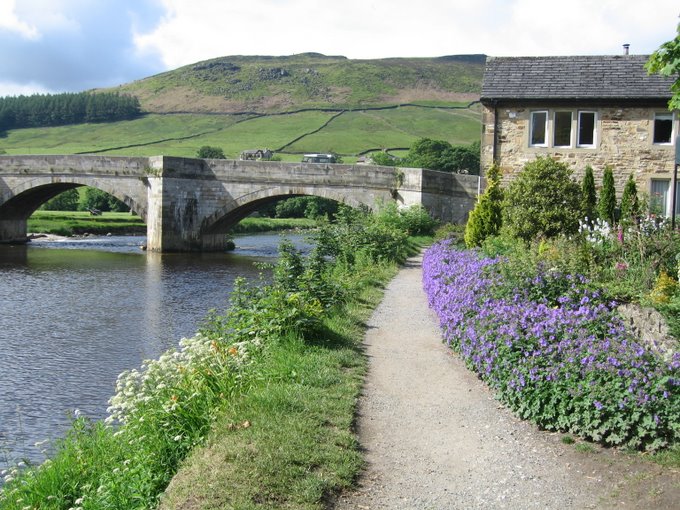 We left the Manor House after breakfast, heading towards Grassington. As we set off we noticed that two women were about 30 yards behind us and we could hear them talking, they were even talking over our conversation! We tried to increase the distance between us but they were still there 30 yards away, so we decided that when we get to the suspension bridge we would stop for a photo shoot and let them pass.

After they had passed us we let the gap get bigger, a least 50 yards or so ahead, and we could still hear them talking, (its amazing how far sound travels when it’s walking away from you).

With a pause at Linton Falls, it was on to Grassington, where we purchased lunch from the local bakery.

As we left the bakery we heard the same two women again but this time they said “hello” so we had a few friendly words before they walked back to Burnsall whilst we went in the opposite direction. We returned to the Dales Way trail leaving the town for my first contact with cattle. I followed the path close to Steve and watched for the slightest movement towards me, with walking pole at the ready to defend myself. However, as informed by many, the cows just watched us walk by.

Further on we took a slight deviation off track (not intended!) where we met an American family who were also walking the Dales Way, but were also lost. So we improved US & English relations by guiding them back on to the trail. We walked to Conistone Pie and had our lunch overlooking the valley.

These are the views from Conistone Pie

After lunch and an airing of the feet we were on our way to Kettlewell and as we arrived we found a lovely tea shop where we had Yorkshire tea, a slice of home made cake and a bit of banter with the staff, it was brilliant. Then on to the Blue Bell Inn to book in for the evening. After a shower & a change we took a stroll around the village where upon we found the Kings Head pub, so we had an aperitif or two of Black Sheep before returning to the Blue Bell for dinner.

The next morning Steve and I posed at the start of the walk for the typical photographs near the bridge. Then, with goodbye kisses to my wife and waving farewell, we set off on a slightly overcast day, Liz drove off home to the Midlands – at the weekend she was going to stay with friends near Blackpool before meeting me at the finish in Bowness.

We walked on to Addingham where we saw a church with a blue clock face. How unusual.

The sun came out to join us and at Bolton Abbey, where the crowds had gathered, we stopped for the first lunch of our walk. We found a table free and then took it in turns to get food so that no one would take our table. We rested, kicking off our boots letting our feet cool down ready for the next section to Burnsall.

We walked towards Barden Bridge, passing the Strid on the way, where we had to try the local ice cream from a van parked at the side of the road; this was our dessert. The route became

very quiet from here on, not many people to be seen until we got to Burnsall,
Here we were booked in to the Manor House, next to the Red Lion, where we had a quick pick me up tonic (a pint of Black Sheep beer), well deserved after our 13 mile walk.

Up to our room for a shower, a change of clothes and preparation for the next day’s walk. Then it was back to check on the tonics (Black Sheep) to see if our taste buds were still OK before having dinner.

For my preparation I used to walk a regular 10 – 12 miles to build up stamina. There were also occasional days over Long Mynd and up the Llanberis path, Snowdonia.

Steve, a friend of mine who is also an avid walker, often accompanied me on my training walks and became interested in doing The Dales Way but unfortunately he would only have time to complete the first 3 days.

The travel company Mac Adventure sorted everything for me and they were brilliant. They arranged for my bags to be carried on to the next B&B, all I had to do was plan what to take with me each day.

This is how my first long distance adventure started.

Late on a wet Sunday afternoon my wife & I arrived at the Riverside Hotel in Ilkley – we found it to be very comfortable with good food, drink and very pleasant staff. After a relaxing meal and nightcap it was bed time after our long journey.

The next day it was time for a Dales Way preamble, a walk around Ilkley’s shops and a pot of tea in the famous Betty’s tea room before meeting up with Steve.

When Steve arrived he booked into his hotel and then we took his car to East House Farm, Beckermonds near Outershaw ready for his return to the Midlands after his third day of the walk.

Whilst at Beckermonds the landlady, Mary, promised us a welcoming pot of tea at the end of our day’s walk (Read on).
So it was back to Ilkley for a pre-Dales Way dinner and drink before retiring for the night.