Breakfast time was early, by choice, as we had 16 miles to walk. The weather was brilliant, dry and sunny, no rain forecast. We met two fellow Cumbria Way walkers (we later discovered were David & Iain from Scotland) who were even earlier than us. There was very little conversation, as you would expect the first time of meeting.

Whilst we were eating, the other two walkers finished and as they were leaving the room we bid them farewell, saying we’d hope to see them en route.

After breakfast, and leaving the luggage in the hall, it was outside to don our boots. 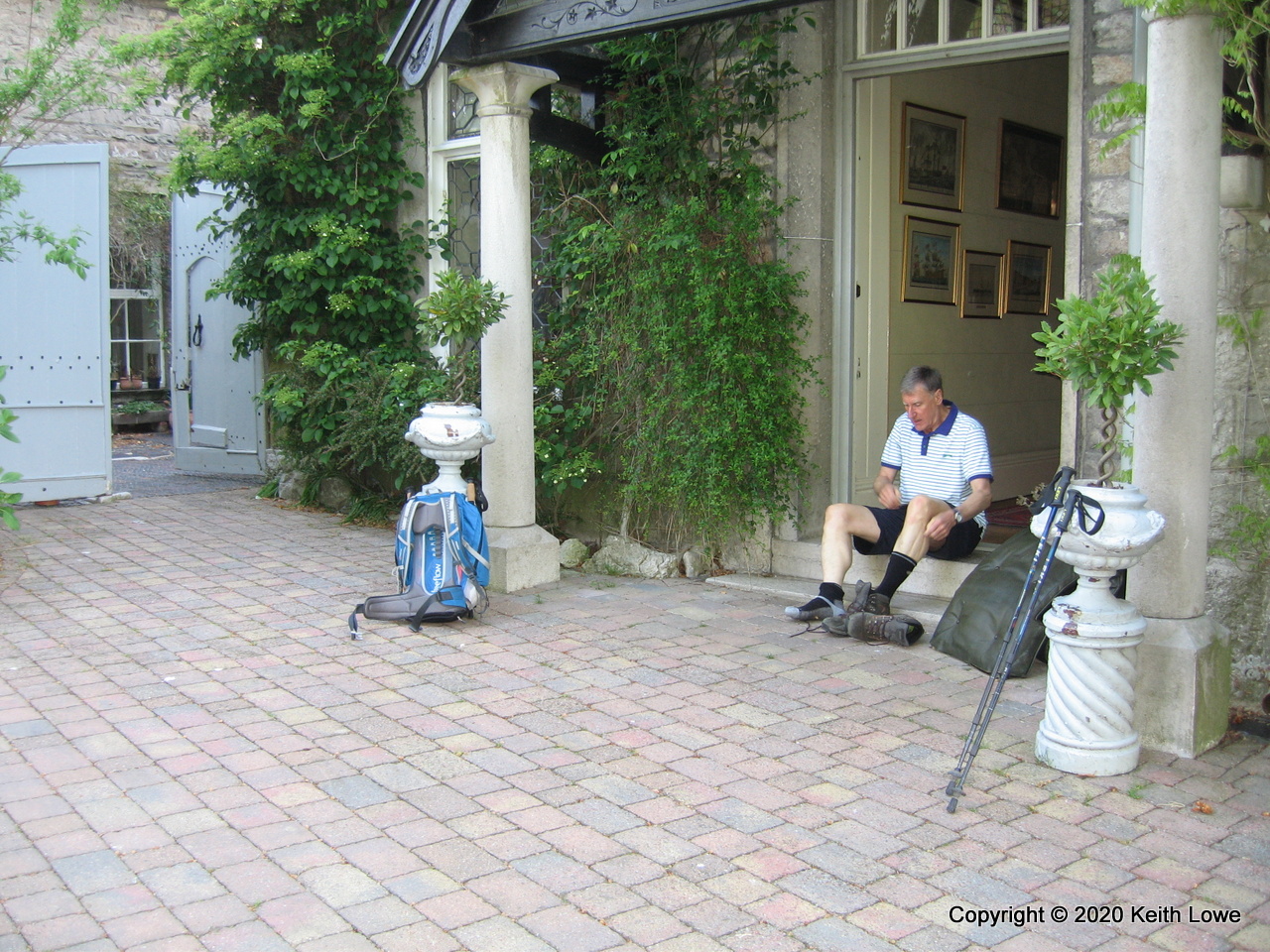 Our host came to say goodbye and then we were on our way to the start point, The Gill.

In town we headed off to find our lunchtime meal deal in the local store before making our way to the starting point. At The Gill is the ‘Cumbria Waymarker’, a metal spire that encloses a display of the route’s geology. 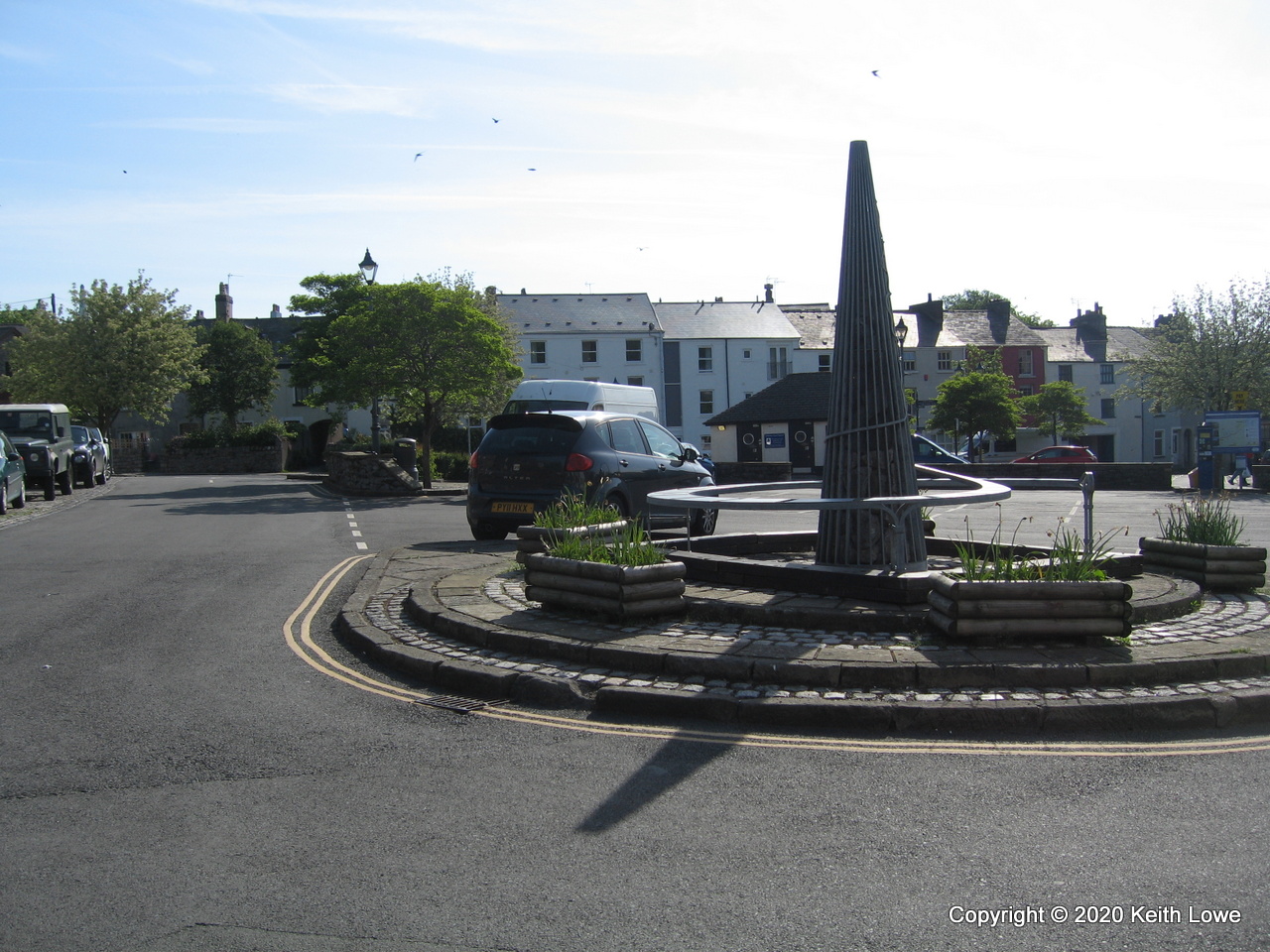 At the waymarker, we needed someone to take the traditional group photo for the start of the walk. Luckily for us, but unluckily for the lady passing, she was asked if she would take our group photo. 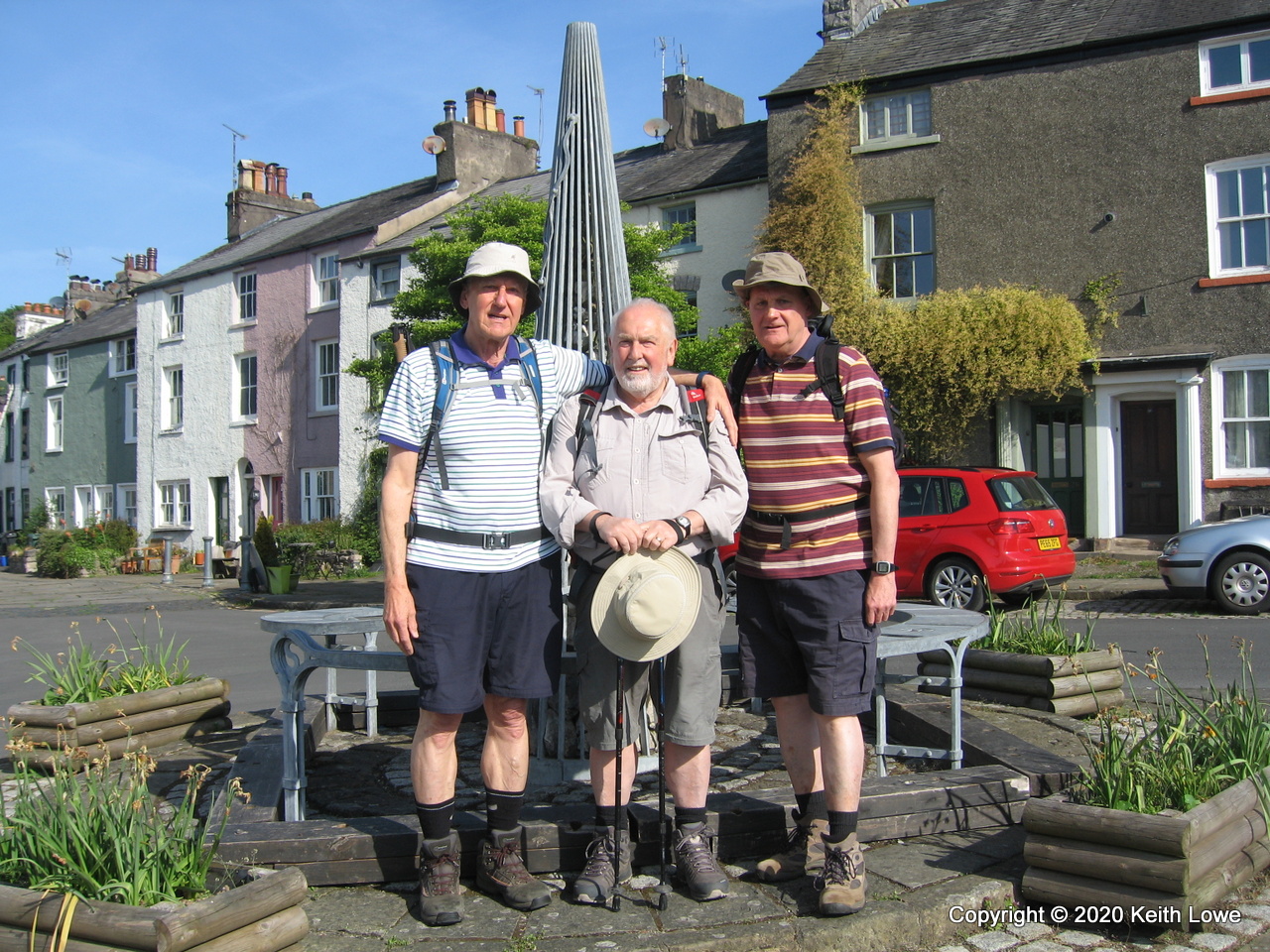 This she did, asking if we were walking the Cumbria Way. When we said yes, she looked surprised and smiled.

After all the posing for our photographs we thanked the lady for her time. We set off on our way, passing the plaque which marks the start, 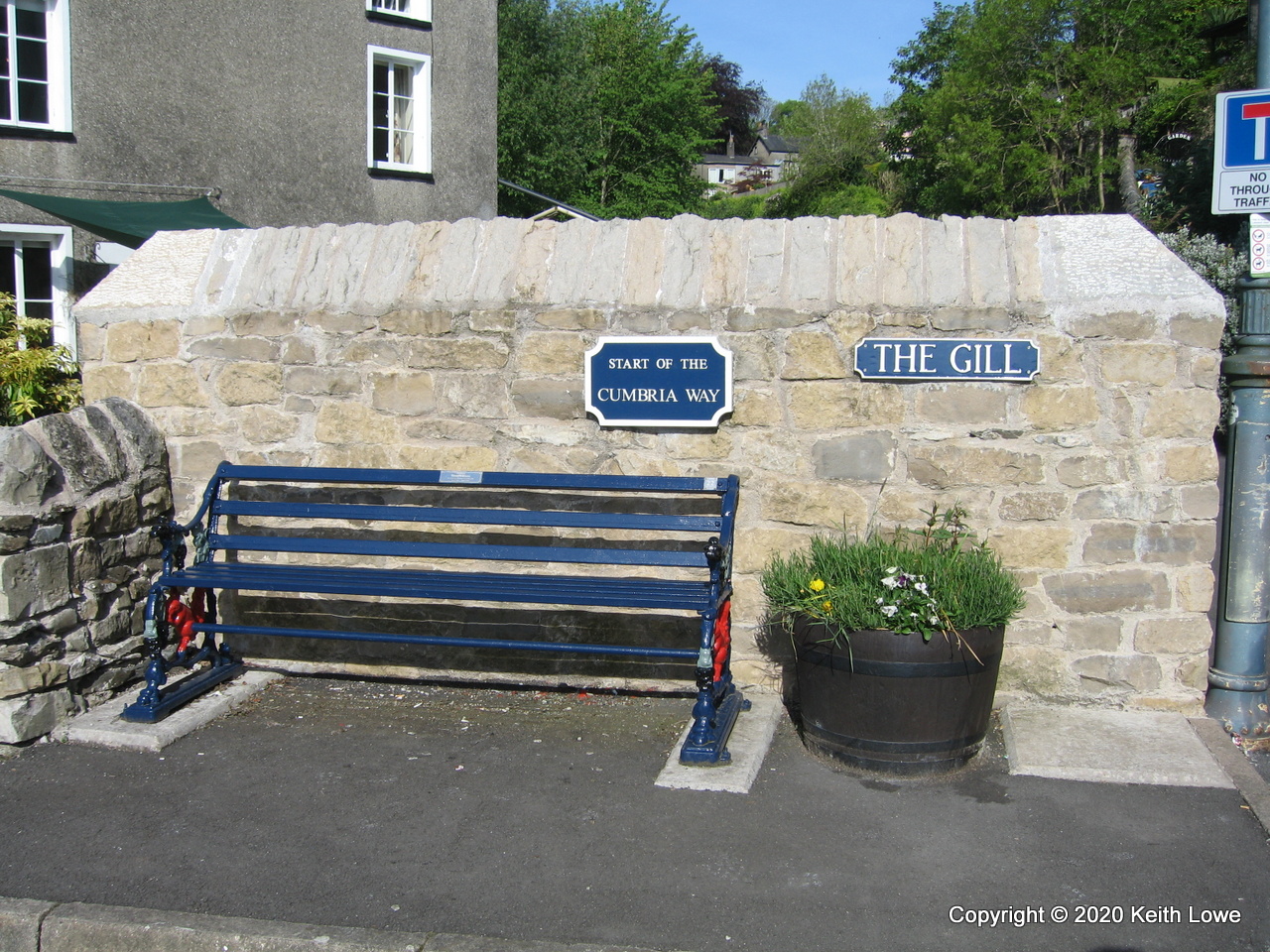 then followed the beck up to the junction where we started to climb up a bit of a steep slope to the end of a walled junction. We squeezed through a narrow gap in the wall and were soon walking across fields to Old Hall Farm. 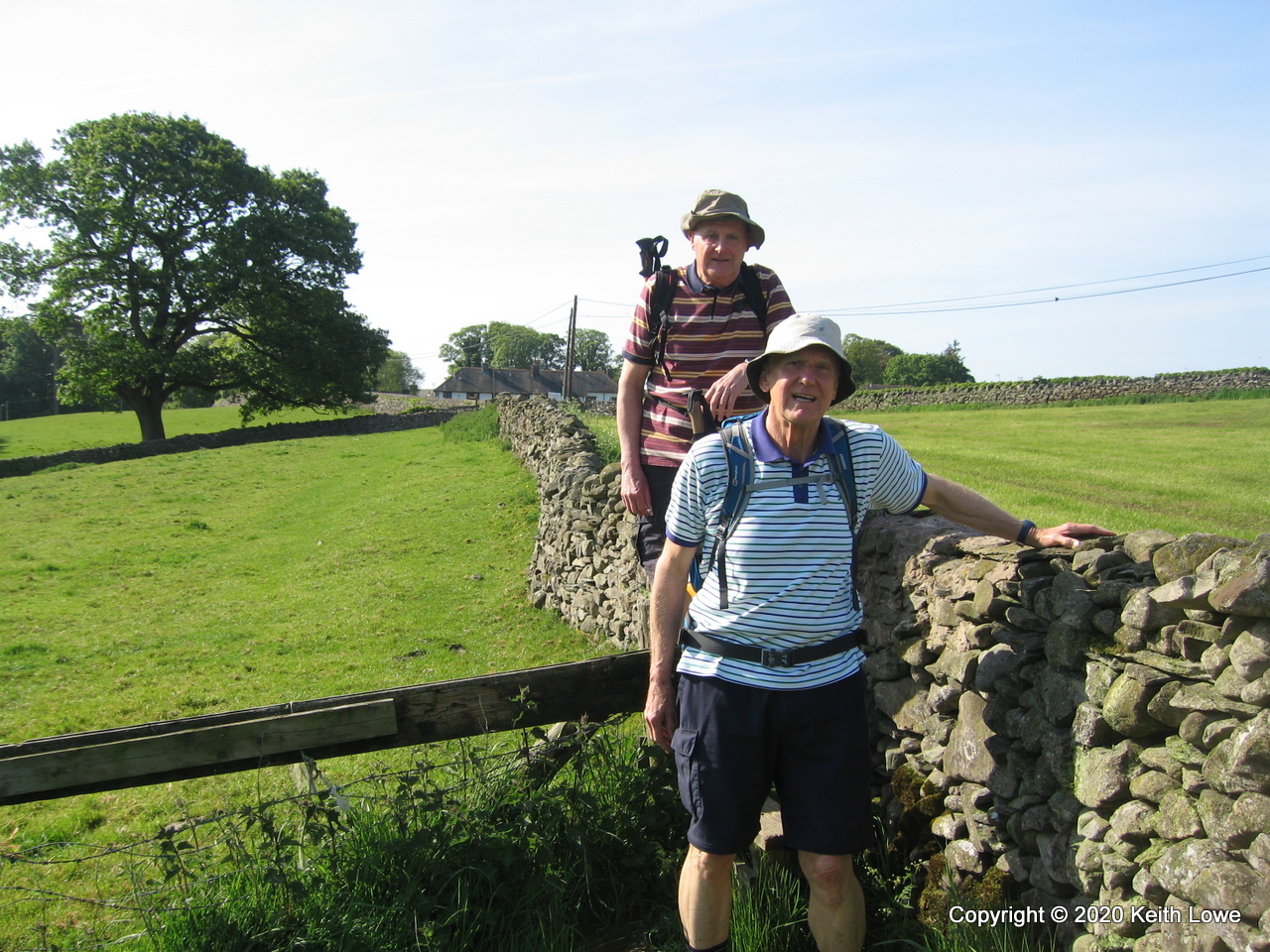 This time we walked through the farmyard to pick up the original route; when we did this in 2012 we were directed to follow an alternative route because there was construction work going on.

The farmer was walking a small herd of cattle through the yard with the aid of his dog. We stood aside and, as they passed, we could see the sign directing us across a field and up the hill to the next fingerpost and stile.

Over the stile we went, still climbing and walking towards a small wooded area next to Boretree house with fabulous gardens. We continued walking up through the fields, 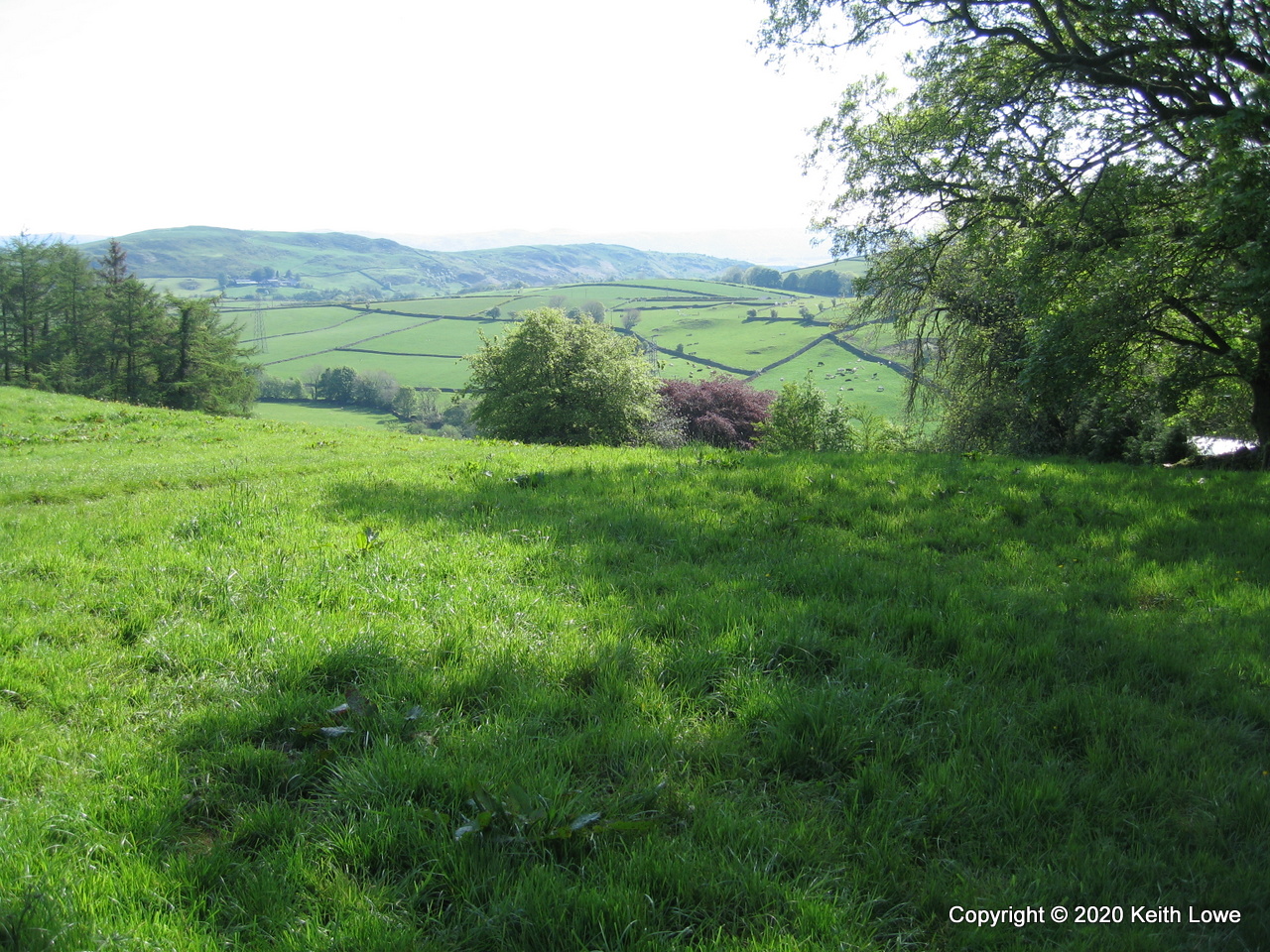 following the signs, till we reached Higher Lath Farm. At this point, before climbing over the walled stile, we looked back towards Ulverston where we had fantastic views of Morecambe Bay and Hoad Monument which looks like a lighthouse, but it isn’t one! 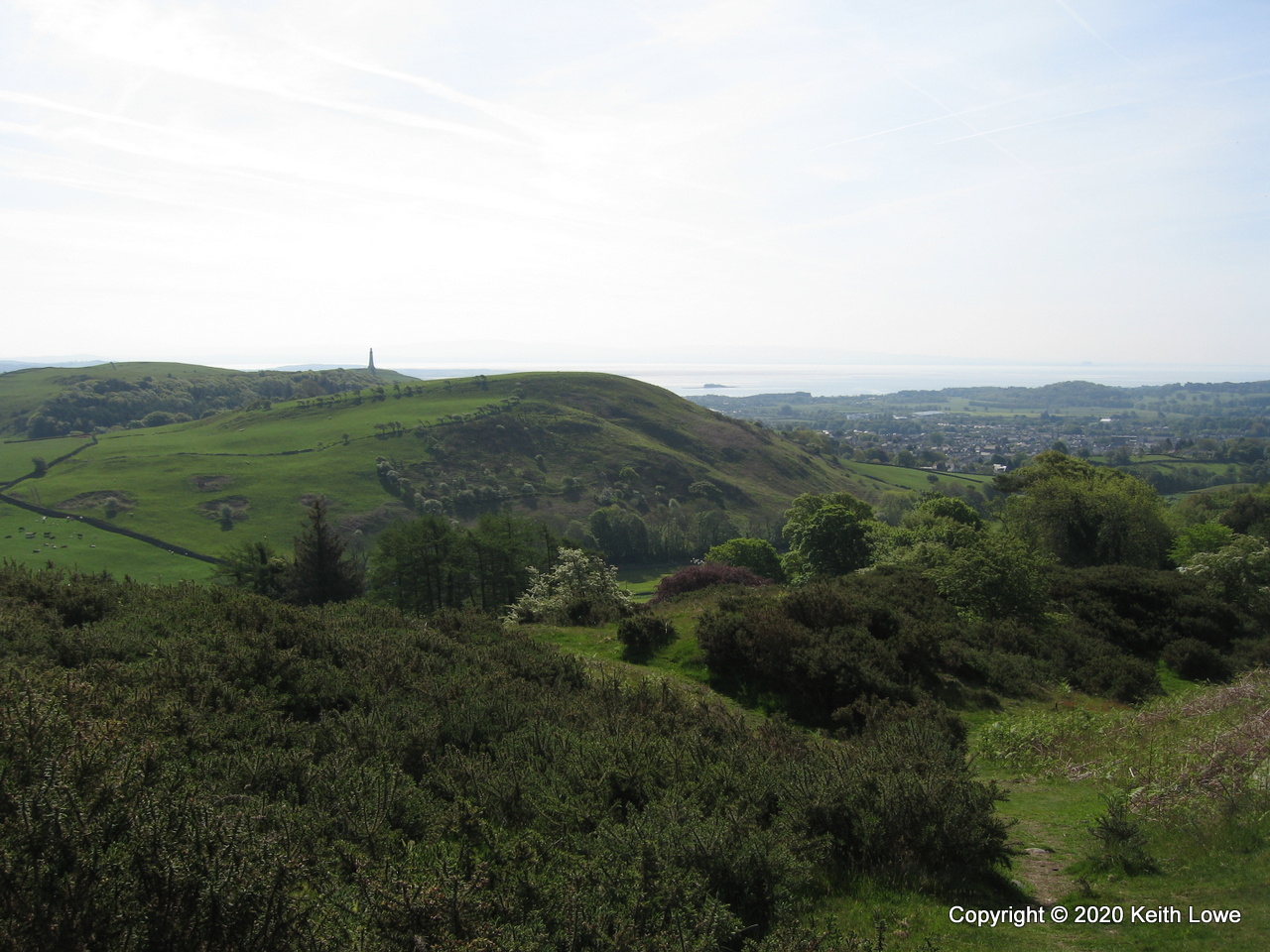 We walked down a winding road and near the bottom of the hill we saw David & Iain we’d met earlier at breakfast, studying their map.

They informed us that the original route has been diverted across more fields, away from the houses at Newbiggin. After a brief chat we all set off across the field, when a farmer on his quad bike came over to show us the way and to tell us how, and why, the route had been changed. He then left us to follow his directions, only to find there was no way out of it, other than climb over a wall where there was a big drop into the next field. David & Iain decided to go the farmer had directed us but, after checking the map, we could see that if we headed down the field we were in, we could climb over a lower wall and proceed along the road 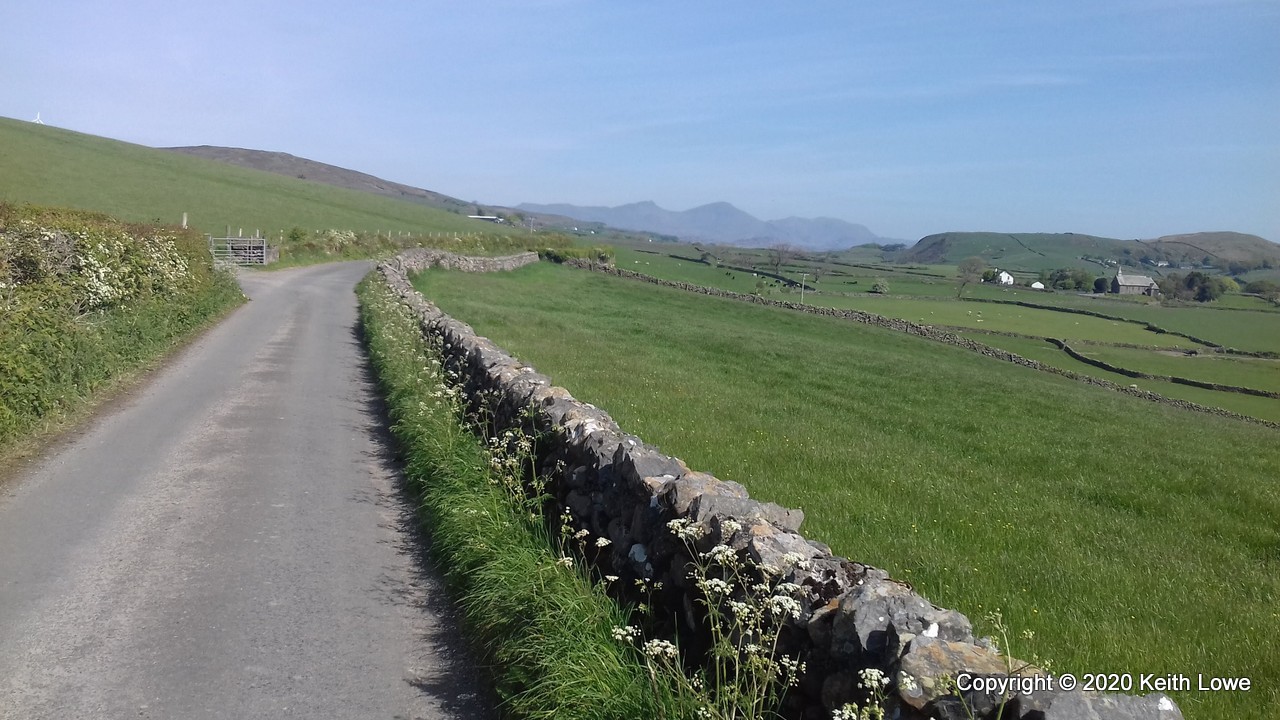 going towards St John’s Church, Osmotherley. As we walked along we could see the other two crossing the fields in the distance.

We continued along the road till we saw the signpost and waymarker pointing the direction we needed. We left the road and were crossing the fields when we were rejoined by our David & Iain. We headed towards the church, chatting about the route problems and finding out about each other, whilst avoiding the curious cows that were now following us.

When we arrived at the church, 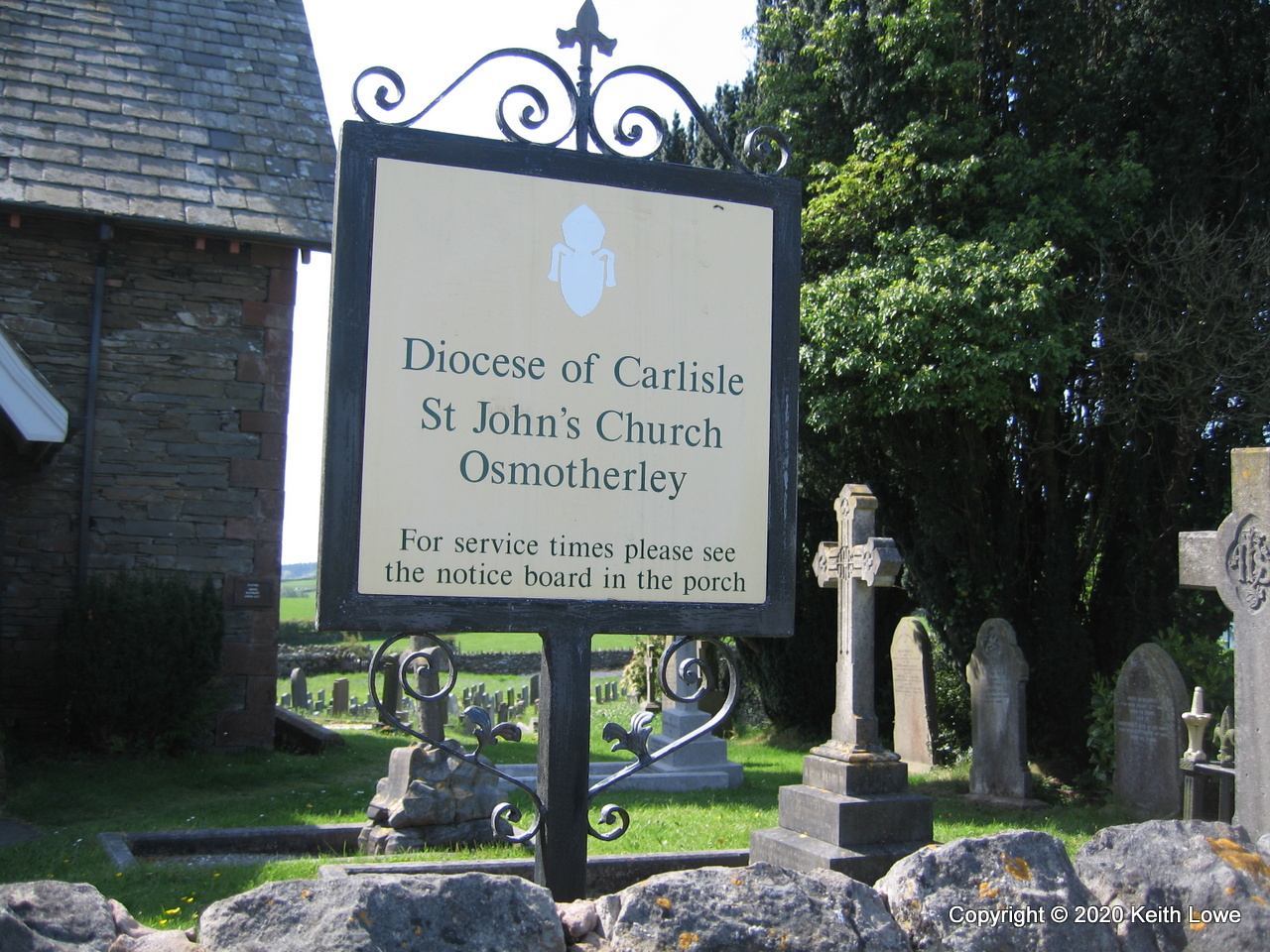 we stopped for a refreshing drink; David & Iain continued on their way.

After twenty or so minutes we were crossing more fields, this time on an easily identified path towards Broughton Beck. At Broughton Steve and I remembered this was where we’d seen ornaments on a wall showing us the way. 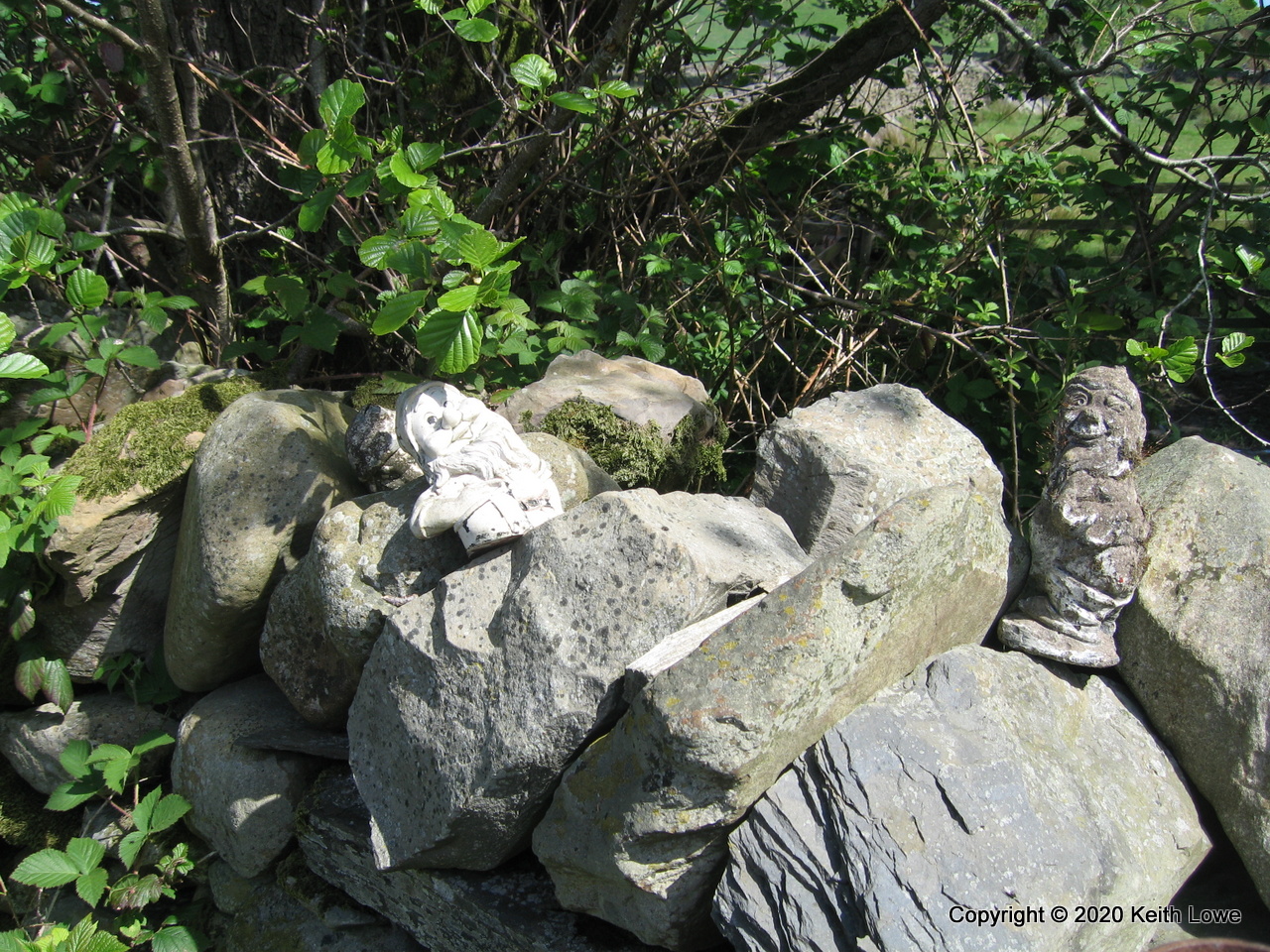 As we were opening a farm gate two more walkers appeared. Steve spoke to them; they were from Switzerland, (who we also discovered were Klemens & Valérie) they were walking the Cumbria Way. The week prior they had completed the Dales Way.

As we walked on, it was obvious they were much faster than us. They had youth on their side and were disappearing as we walked. We followed on towards Nettleslack crossing more fields until we eventually arrived at a road where we found another route change. After a while looking around, Steve found the path leading to Keldray and from here on the views were fabulous. 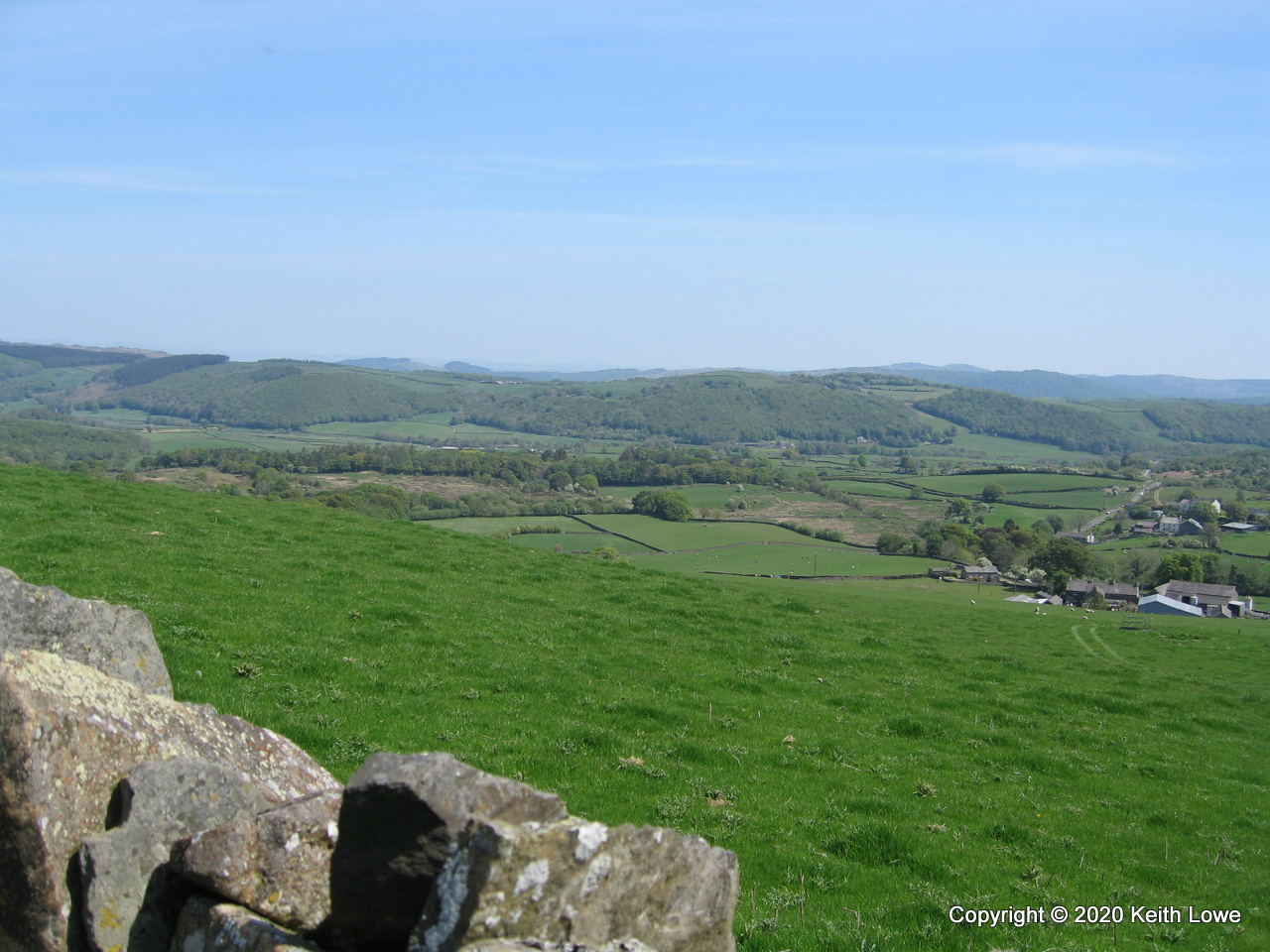 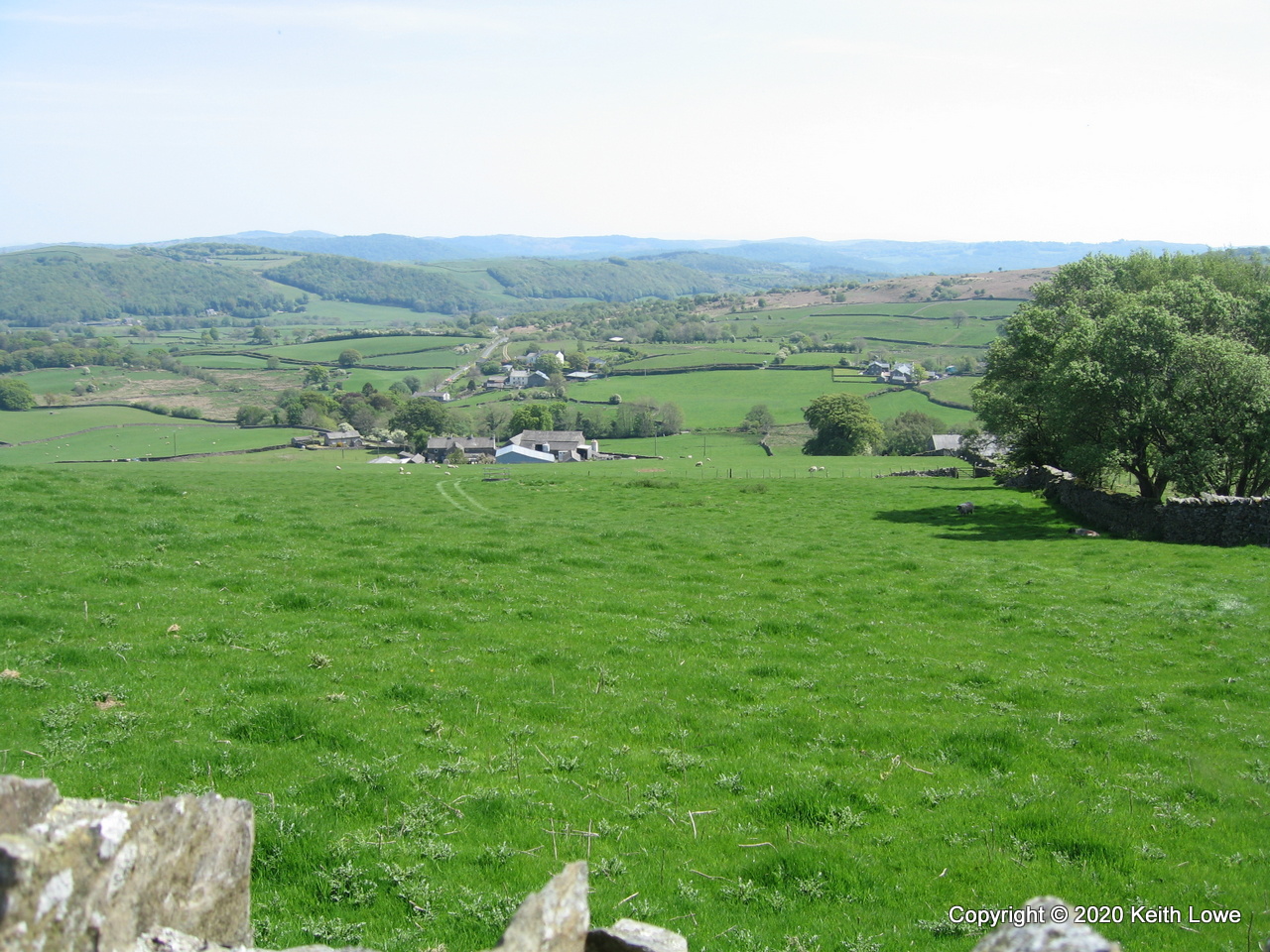 As we arrived at Gawthwaite we met the local friendly postman who directed us which way to go.

After a brief stop for more refreshments, we continued along the path and as we were taking more photos of the scenery another couple caught us up. We found out they were from Carlisle and had decided, that as they were new to that area and had heard about the Cumbria Way, they should walk it so they were now on their way back home.

Shortly after this we found a good spot, on a very quiet lane, where we could sit down in the shade of some trees for lunch, plus give our feet and boots an airing.

After lunch we were soon on our way, heading for Kiln Bank and Tottlebank before the climb to Beacon Tarn, a remote area. As we arrived at the tarn, 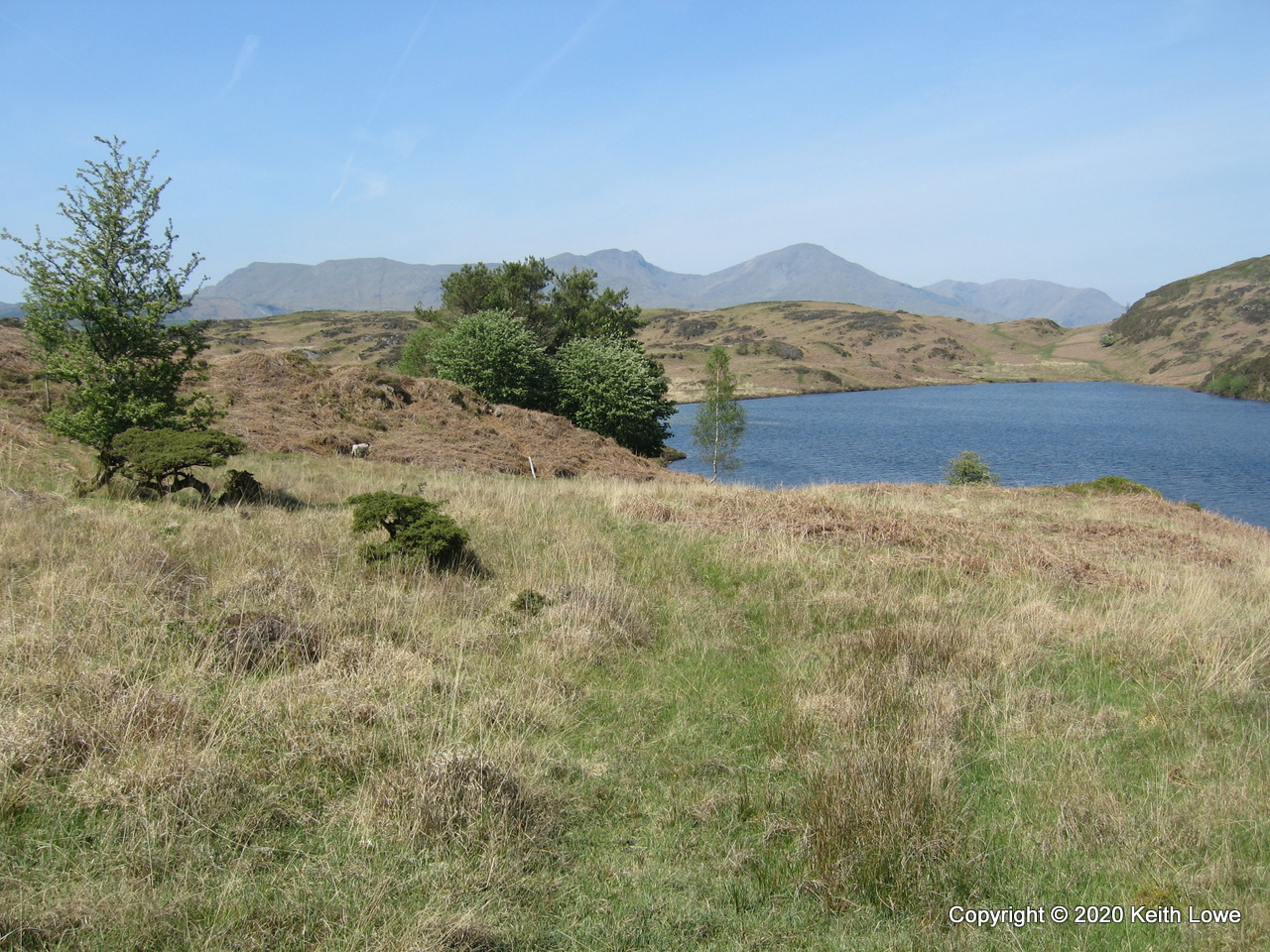 we didn’t see any one else in front or behind us. We now had to follow the path around the tarn; it was quite boggy in places and would have been horrible if we’d ended up with our boots covered in mud. 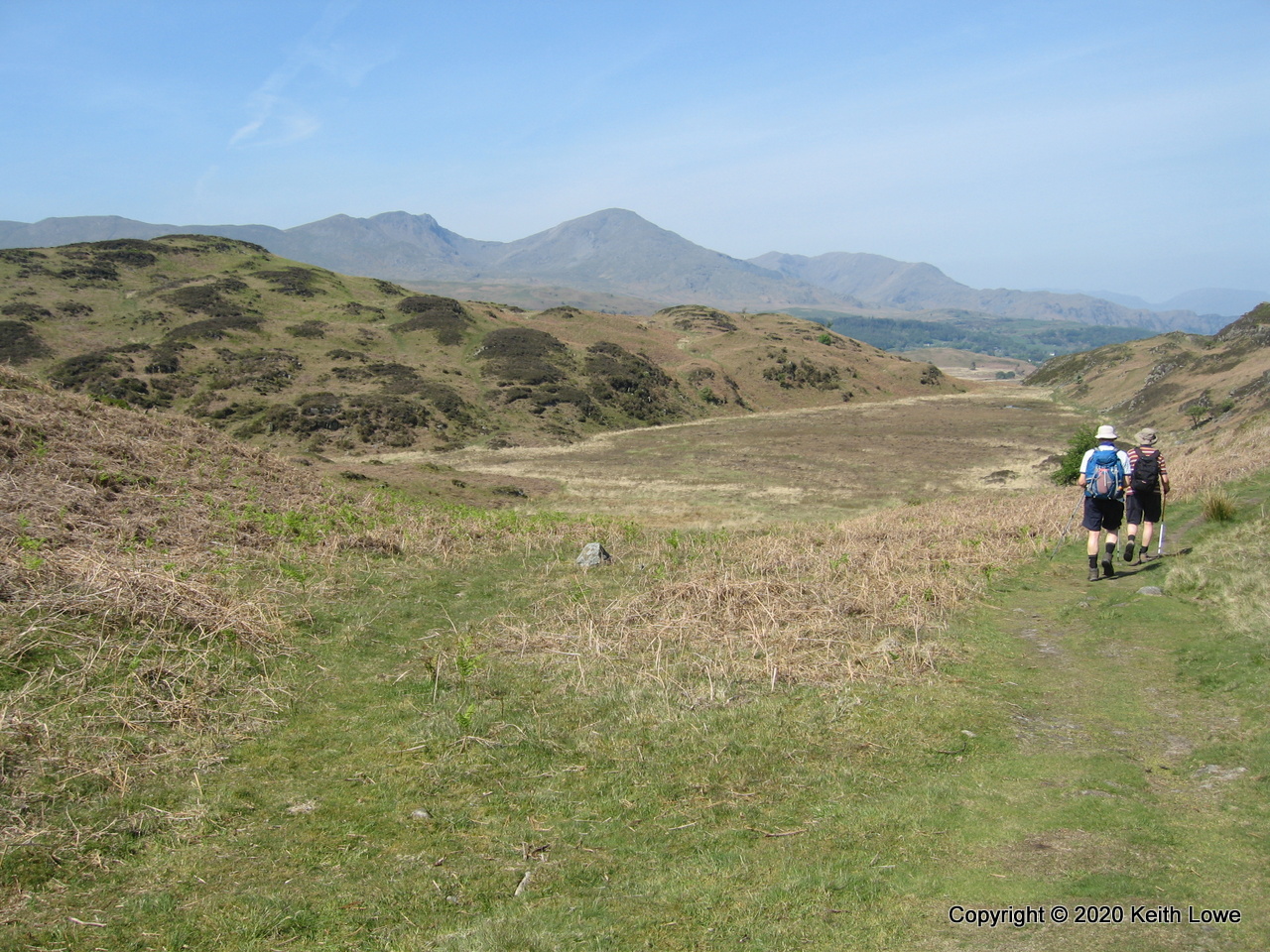 we followed the beck down to Stable Harvey Moss and on to the road. Unfortunately, we took an alternative route which brought us out a little further away 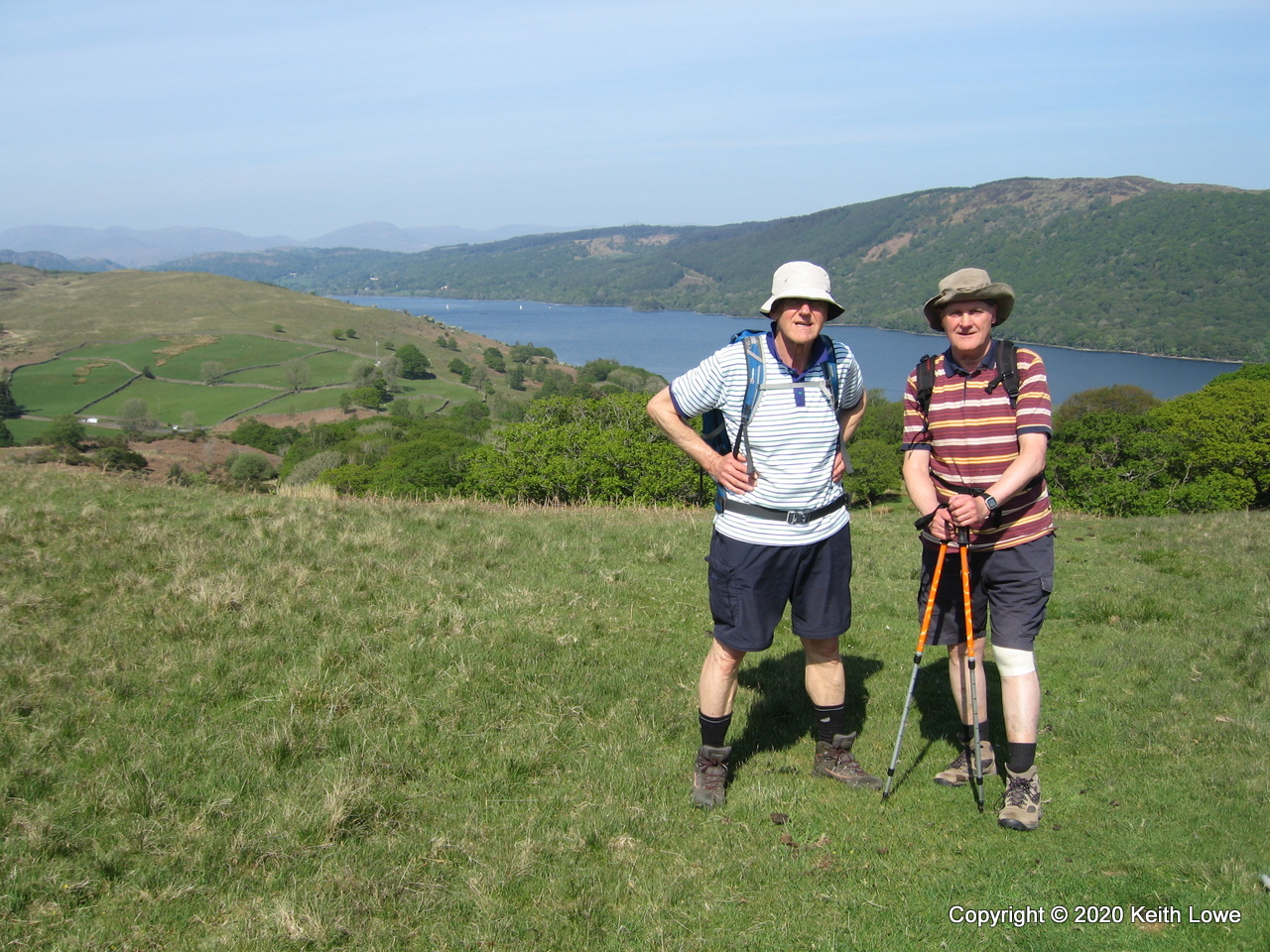 from our crossing point to Coniston Lake. Once we realised the error it was soon corrected and were now joining the lake path towards Coniston.

When you’ve walked from Ulverston, feeling tired and exhausted, you now find you have five miles of undulating, tree-routed, 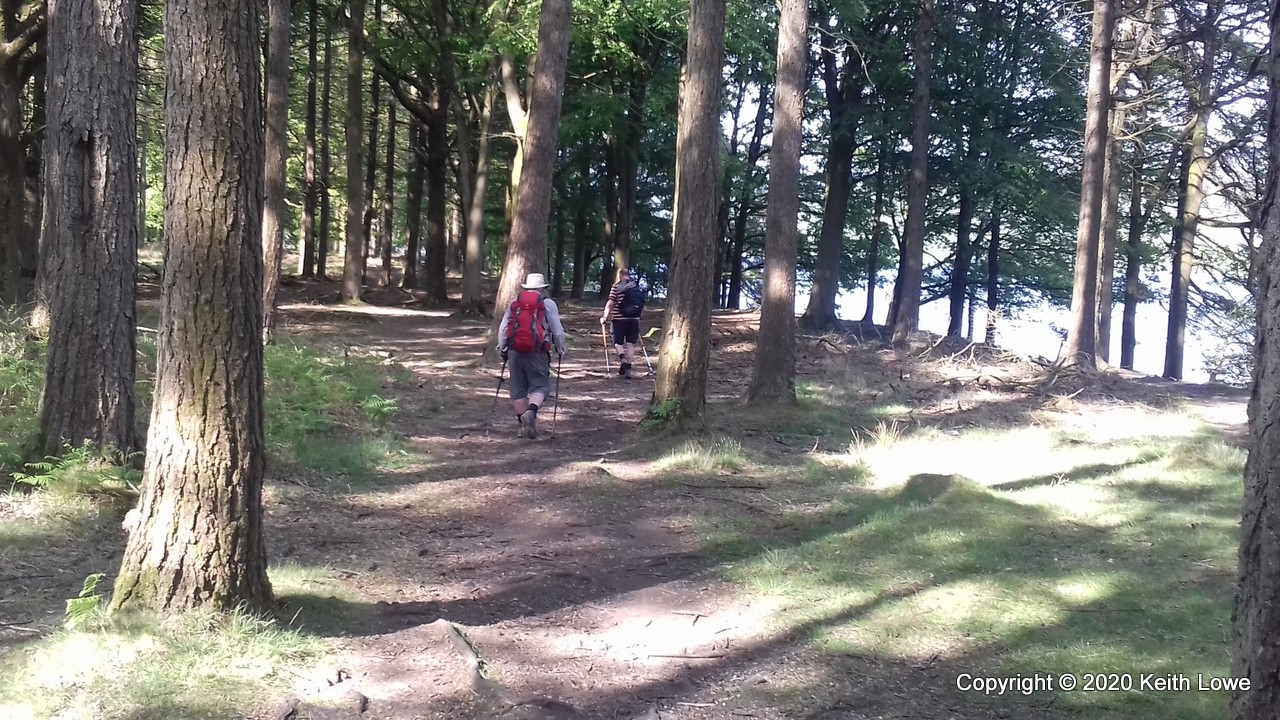 stone-rock paths to contend with! It did get better as we approached an outdoor centre as it became a gravelled path. Once we reached the 16th century Coniston Hall Campsite we could see the village up ahead.

We eventually neared our destination; hot, dehydrated, tired and unaware we were late to arrive at our B&B, Orchard Cottage. We just had to stop for refreshments and it was here we again saw the Klemens & Valérie who hadn’t long arrived either.

Following a little banter, I checked our details for the B&B; we should have contacted them if we were going to arrive after 5:30pm. It was 6:30pm so I phoned and rushed off to meet our hosts who fully understood, but were concerned as they had a local parish meeting to attend. After showing me around, I went back to the refreshment area to collect Steve & Derek and take them to our accommodation.

As we were leaving to find somewhere to eat, our hosts were just leaving to go to a village meeting. A brief introduction took place and then our hosts recommended various places to eat. We had already been in one of their recommendations earlier and it was very pleasant so we revisited our starting point in Coniston – namely, the Black Bull Inn & Hotel, a good walkers’ pub.

The meal was most satisfying and with the help of a little rehydration it was off to settle down for a well deserved sleep.