Coniston is famous for the writer & critic John Ruskin, being the back drop for Arthur Ransome’s Swallows and Amazons books and for Coniston Water, where Donald Campbell died whilst attempting once more to break his own water speed record in January 1967.

We woke to another sunny morning and the forecast was good. Knowing that today’s walk was a relatively short we didn’t rush our breakfast, which was brilliant. After breakfast it was outside to don our boots and sort the rucksacks.

Once ready we said our goodbyes to our hospitable hosts. Now we needed to purchase our meal deals from the local store and once this was done we were off to find today’s start point.

I could remember from the last time we did this walk that the start point was near Yewdale Beck. Before the beck we turned left at the sign post for Skelwith and Ambleside, walking as far as Coniston Primary School, turning right and over the bridge with a path leading towards a folly in the distance.

This was built in the 19th century as a dog-house but now houses information boards.

We followed the path uphill and before entering a wooded area we could see behind us Coniston Lake in the distance. 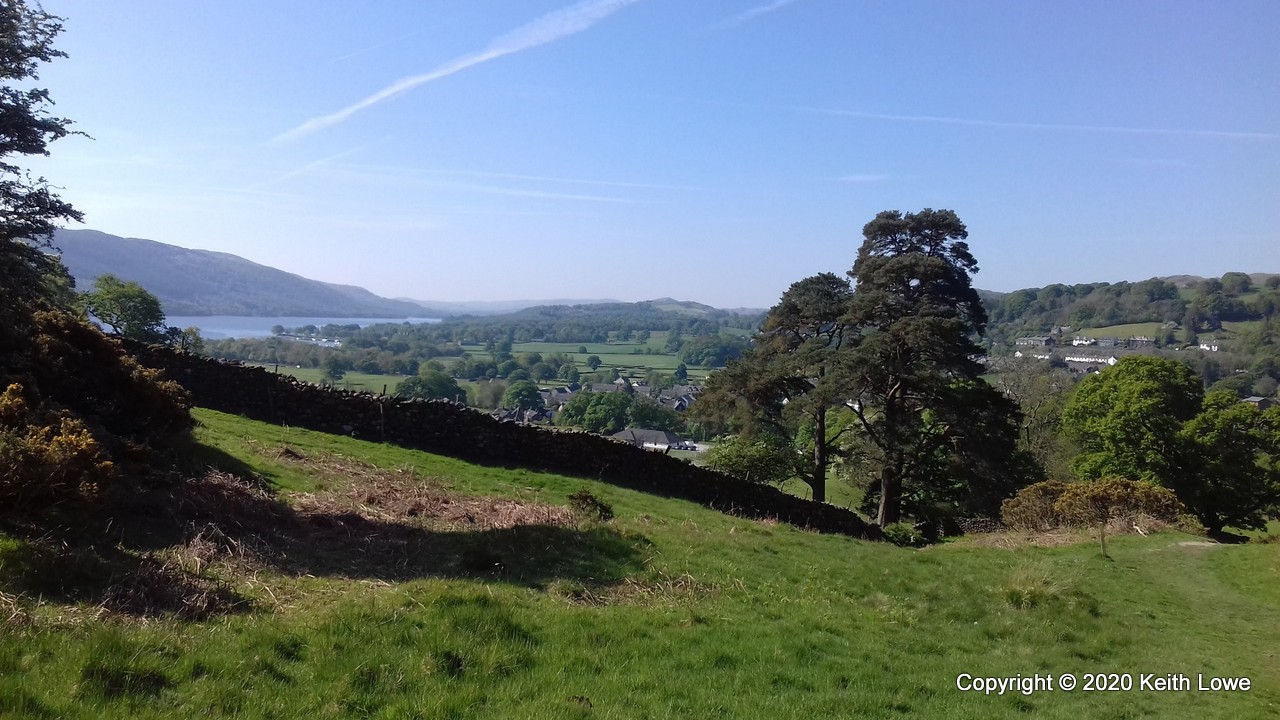 The views of the surrounding hills, mountains and countryside were fantastic. The whole area was a mass of violet-purple from all the bluebells around. 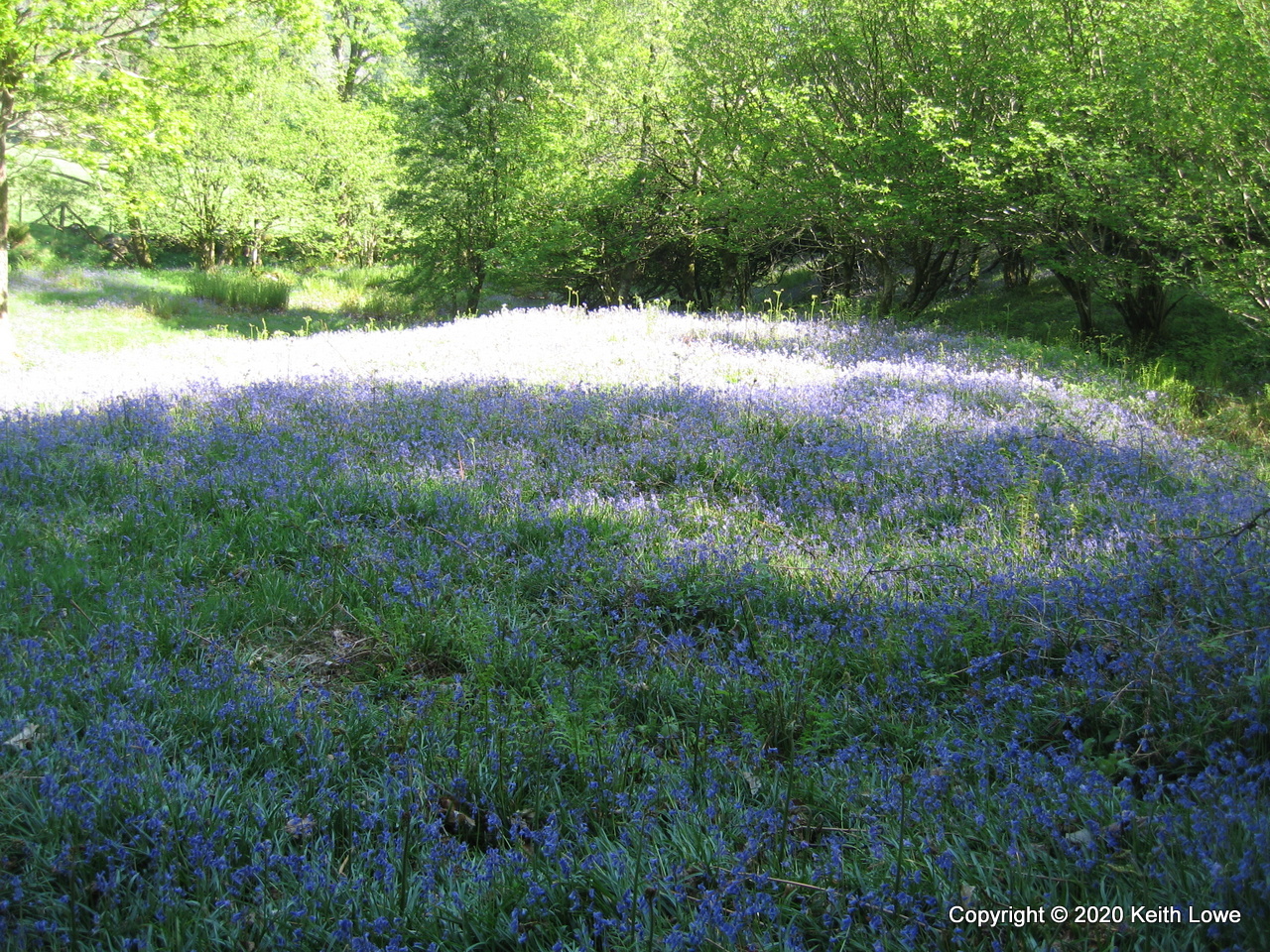 Near the top of the climb, and passing a quaint cottage, we had views of the Langdale Pikes in the distance ahead.

We eventually met a narrow one way road and started yet another ascent to Tarn Hows, which is managed by the National Trust.

As we arrived at the car park we made our way to a viewing point overlooking the tarn. Fantastic! 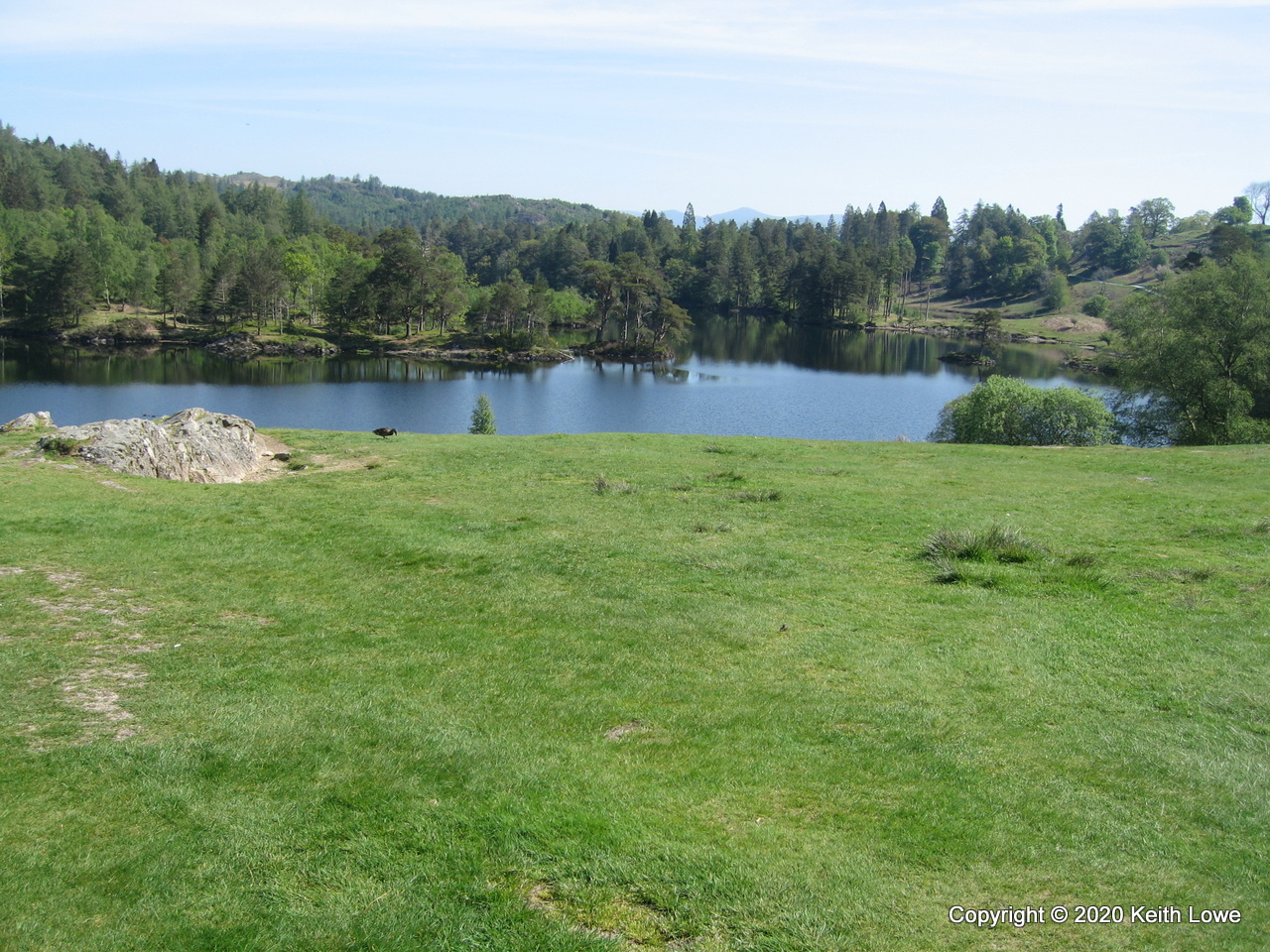 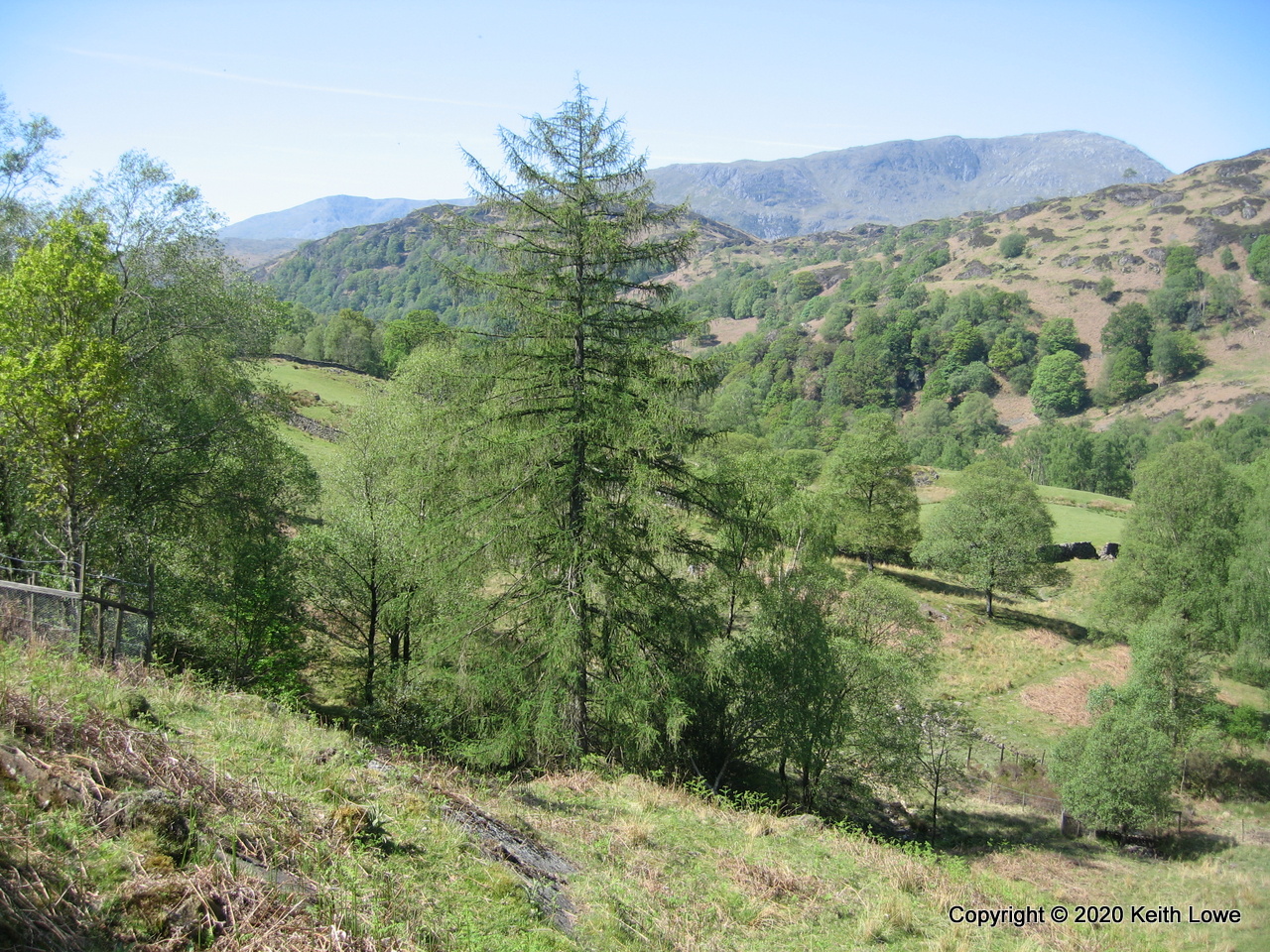 At this point, in conversation it appeared that Derek’s knee was fine on the ascents but becoming painful on the descent.

After a few photographs 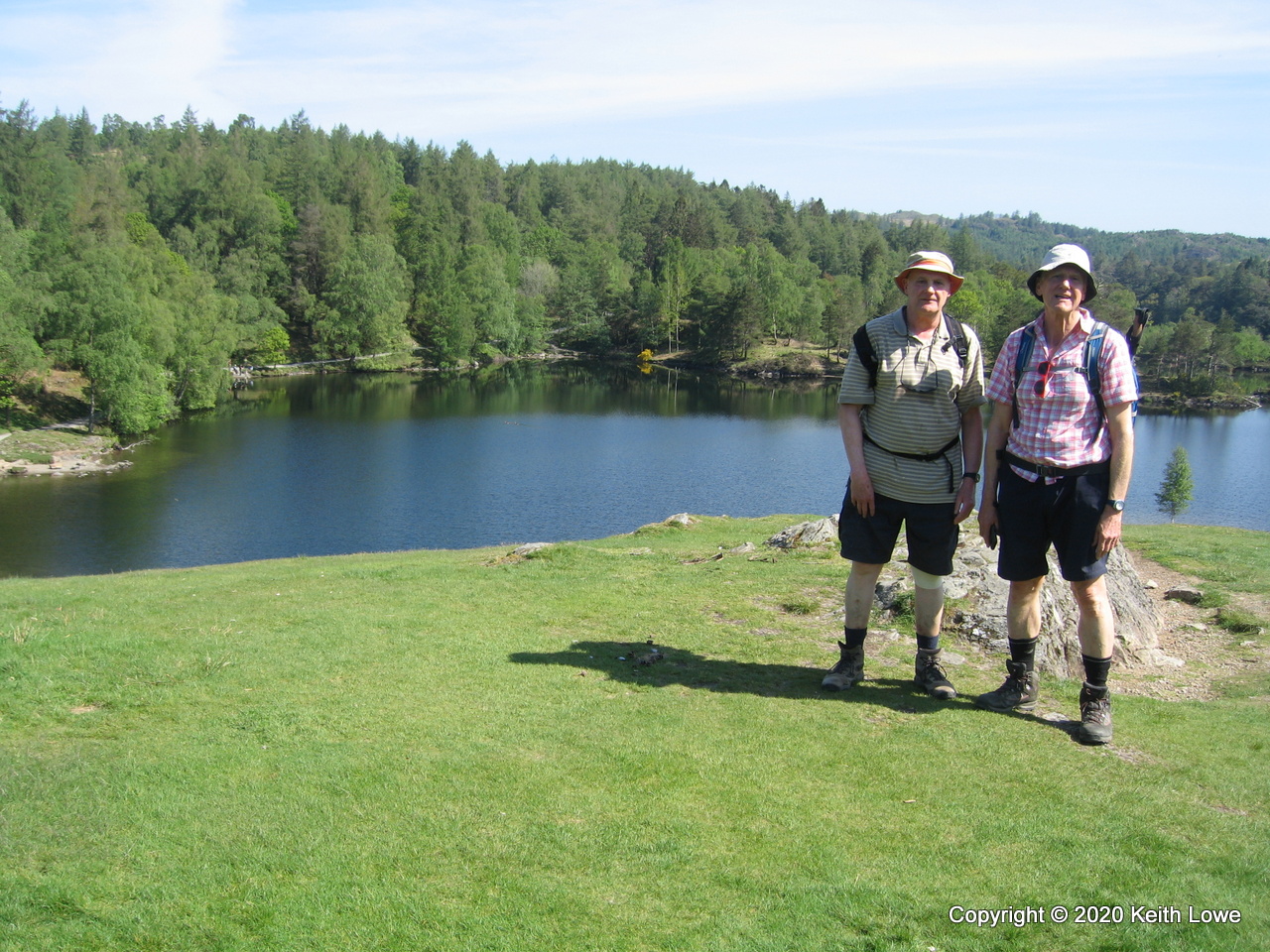 we walked down to the shore line to rejoin the CW path and continued around the shore to the next fingerpost and to follow the sign for Skelwith. The path was varied with loose fine gravel, larger stones, puddles and well worn boulders which would be tricky to walk on if wet. We arrived now at the A593 roadside at Oxen Fell.

Here we crossed the road, turning immediately right to follow the stone wall. At the end we turned left on to a quiet unmarked road, before taking the alternative route on the right through the woods which, we thought, would be easier for Derek’s knee. The path was undulating with some steep sections which led to rejoining the original path before crossing through open farm land.

As we were passing a farm, there, sitting outside the front of the house was a gentleman selling ice creams and he asked us if we wanted buy an ice cream. We said, “No thanks, but do you sell pots of tea?” After a short discussion he invited us into his garden where he would bring us a very welcoming pot of tea; he also allowed us to eat our lunch. So here we were sitting in the garden having a bite to eat, a pot of tea and with fabulous views of Loughrigg Fell in the distance. 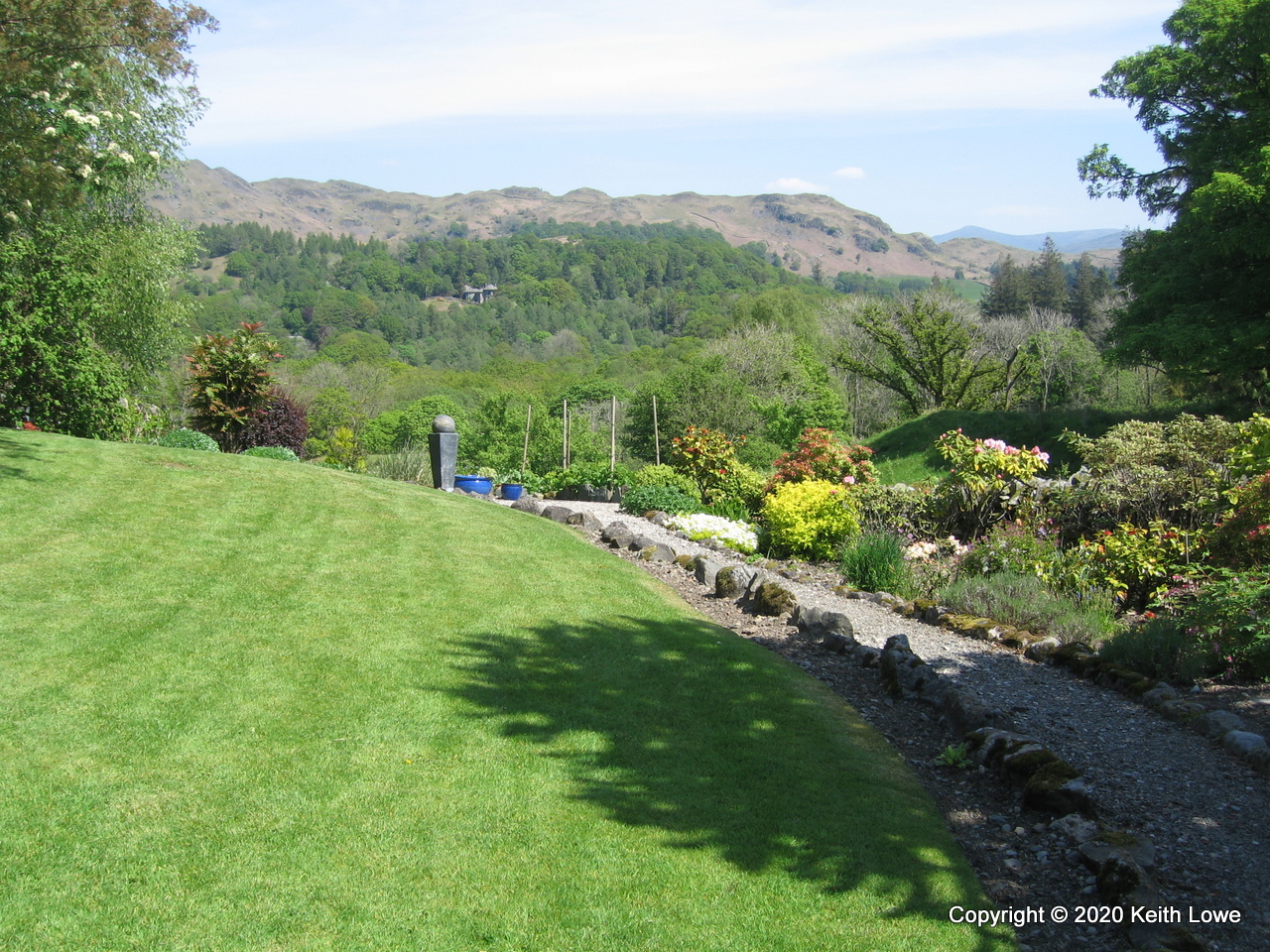 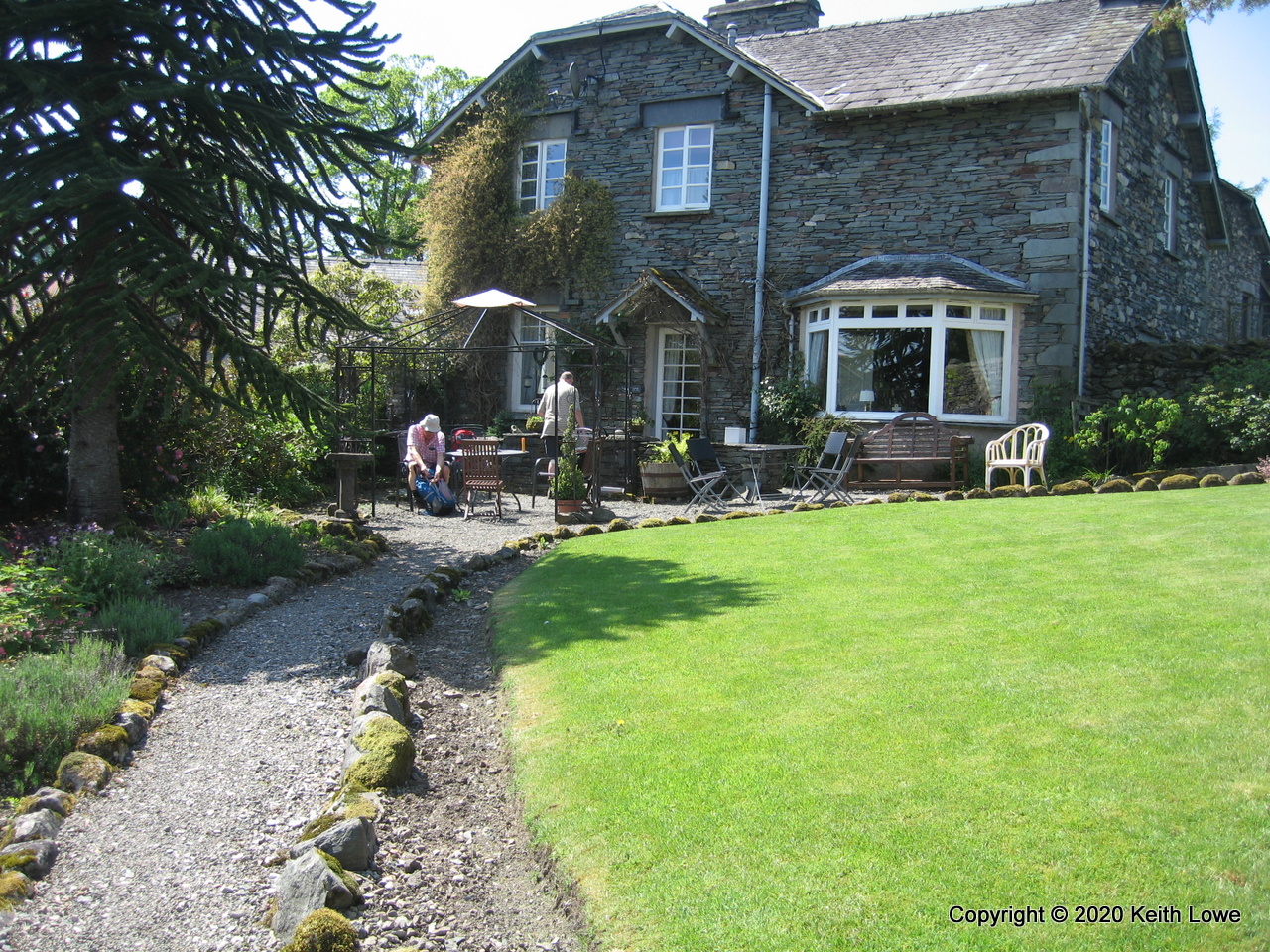 and a tidy up we were on our way to Skelwith Force, following the path again down to the river and the waterfall. We walked along the track to cross the river via a foot bridge 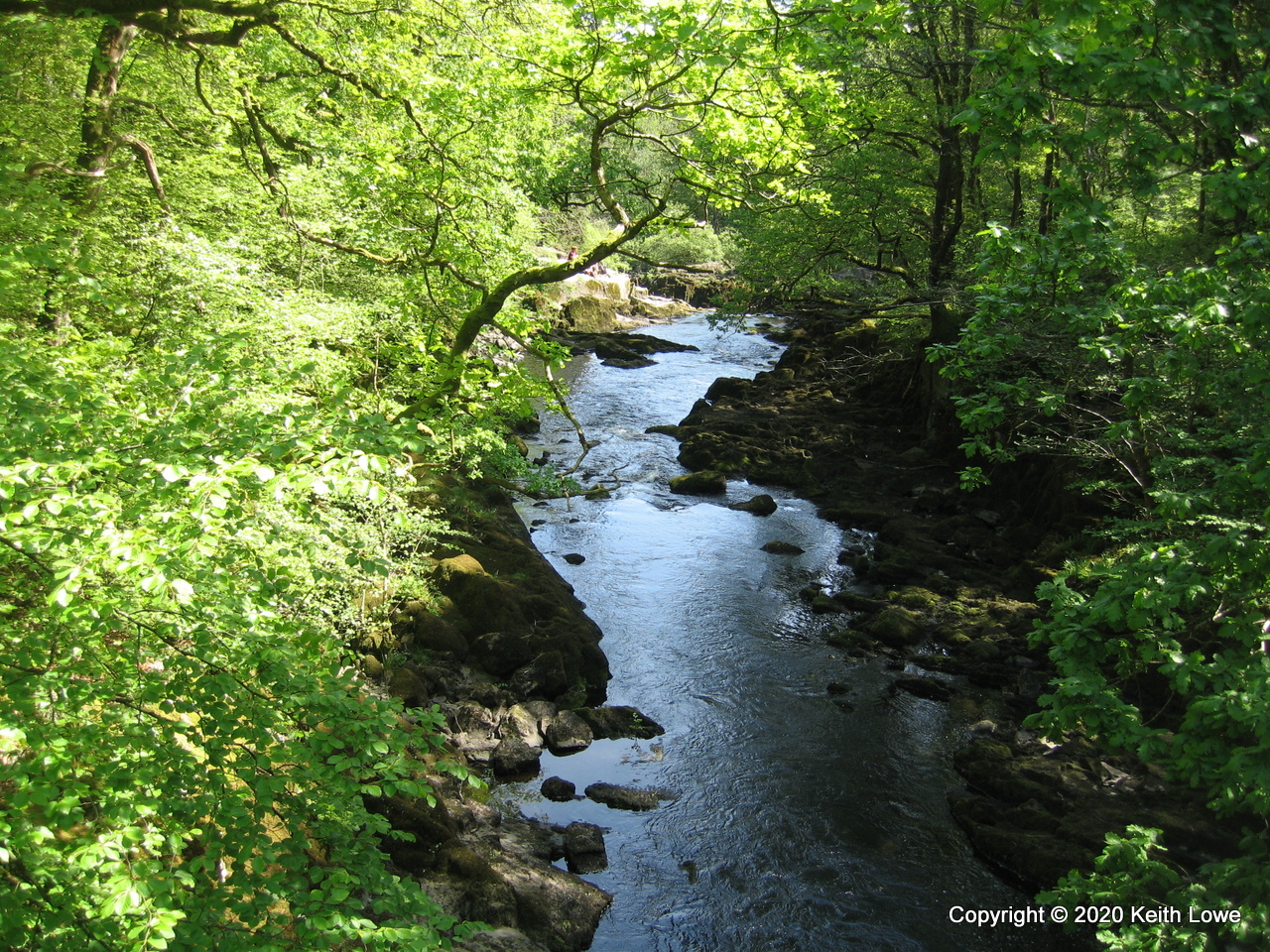 before heading towards Elterwater along a well constructed path with lots of day trippers about. 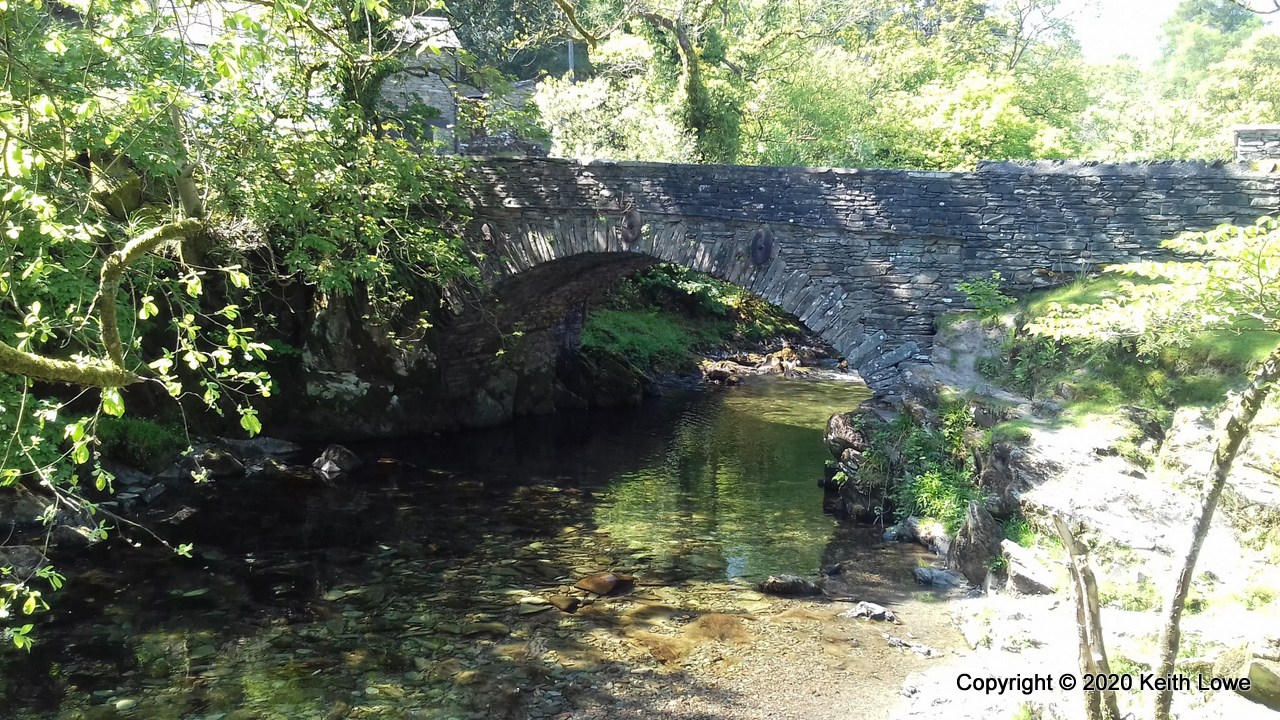 we had a refreshment stop as it was now getting hot and sat on the stone wall separating us from the river, under the shade of trees.

Rest over, we crossed a bridge over Great Langdale Beck then turned right to follow a cul-de-sac uphill, flanked by large boulders from the nearby slate quarries. After 10 minutes or so walking along the road, avoiding the heavy vehicles coming towards us, we dropped down to the river following the path to the road and passing the local pub, Wainwrights Inn, on the edge of the village of Chapel Stile. We were heading towards Thrang Garth and walking along a narrow path with stone walls either side. We crossed another bridge over Great Langdale Beck, turning immediately right and passing Baysbrown Campsite on the left.

We followed the path parallel with the beck until we reached a remote cottage, probably a B&B, turned right behind the cottage, climbing a little on a rugged path to the high point of the path; in the distance we could see our next overnight stay.

From the high point we carefully walked down the large stone man-made steps to reach a barn. Then, following the path, it was over the beck for the last time today before crossing the road to our hotel (New Dungeon Ghyll).

We booked in and took our luggage to the rooms before having to rehydrate after yet another tiring walk in the heat of the day – most unusual for the Lake District. Our thirst quenched, we then sorted the evening meal menus and locations for food.

(View from my room) 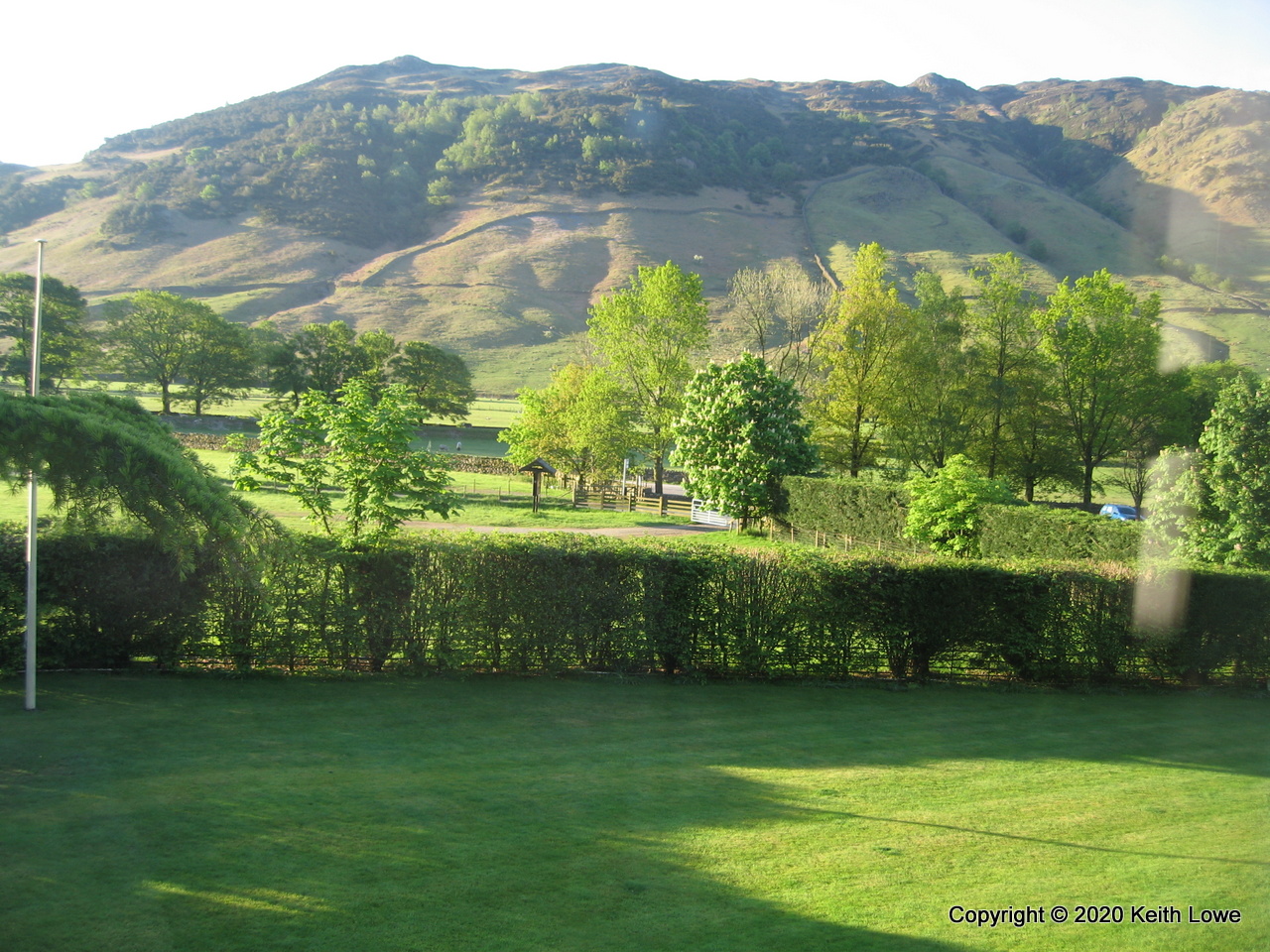 There was only the hotel, with its restaurant and a small bar serving economic meals, or the adjacent Climbers Bar. We decided on the smaller bar. Once the decision was made it was back to the rooms for showers and a little R&R.

We met later in the hotel lounge and had a short stroll around the area. The evening was cooler now so we wandered in to the hotel bar to order food and an aperitif or two. After our meal we retired for the evening.