After a good night’s sleep, I met Steve and Derek in the hotel lounge as we were early for breakfast. Shortly after the restaurant opened, we made our way in, followed by David & Iain whom we’d met at our first B&B. The room was filling up quickly with guests. After breakfast, and a quick hello to David & Iain, we headed back to our rooms to prepare for a shorter trek today. We were due to go over Stake Pass (height of 478m /1,568 ft), our first mountain peak of the walk.

I met Steve and Derek outside the hotel. 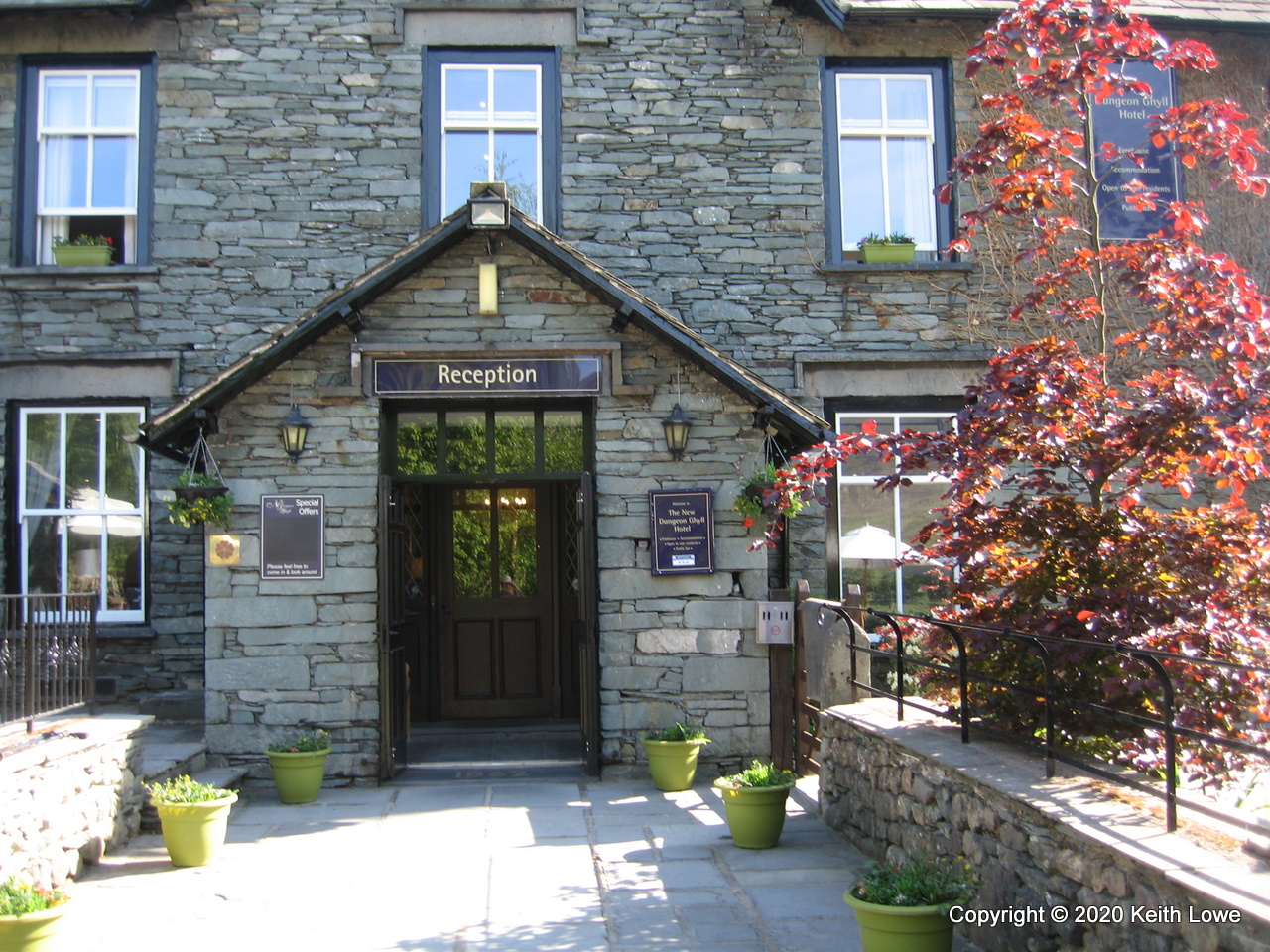 The sun was shining, it was quite cool as it was early and there was very little cloud in the sky. Once we were ready we were off to find the path, which was at the rear of the hotel.

The path led us up a rocky and stony incline. As we arrived at its high point we could see across the fells towards Mickleden, Pike of Blisco and Bow Fell on our left, Rossett Pike in front of us and Loft Crag and Pike o’ Stickle to our right.

We continued along the stony level path 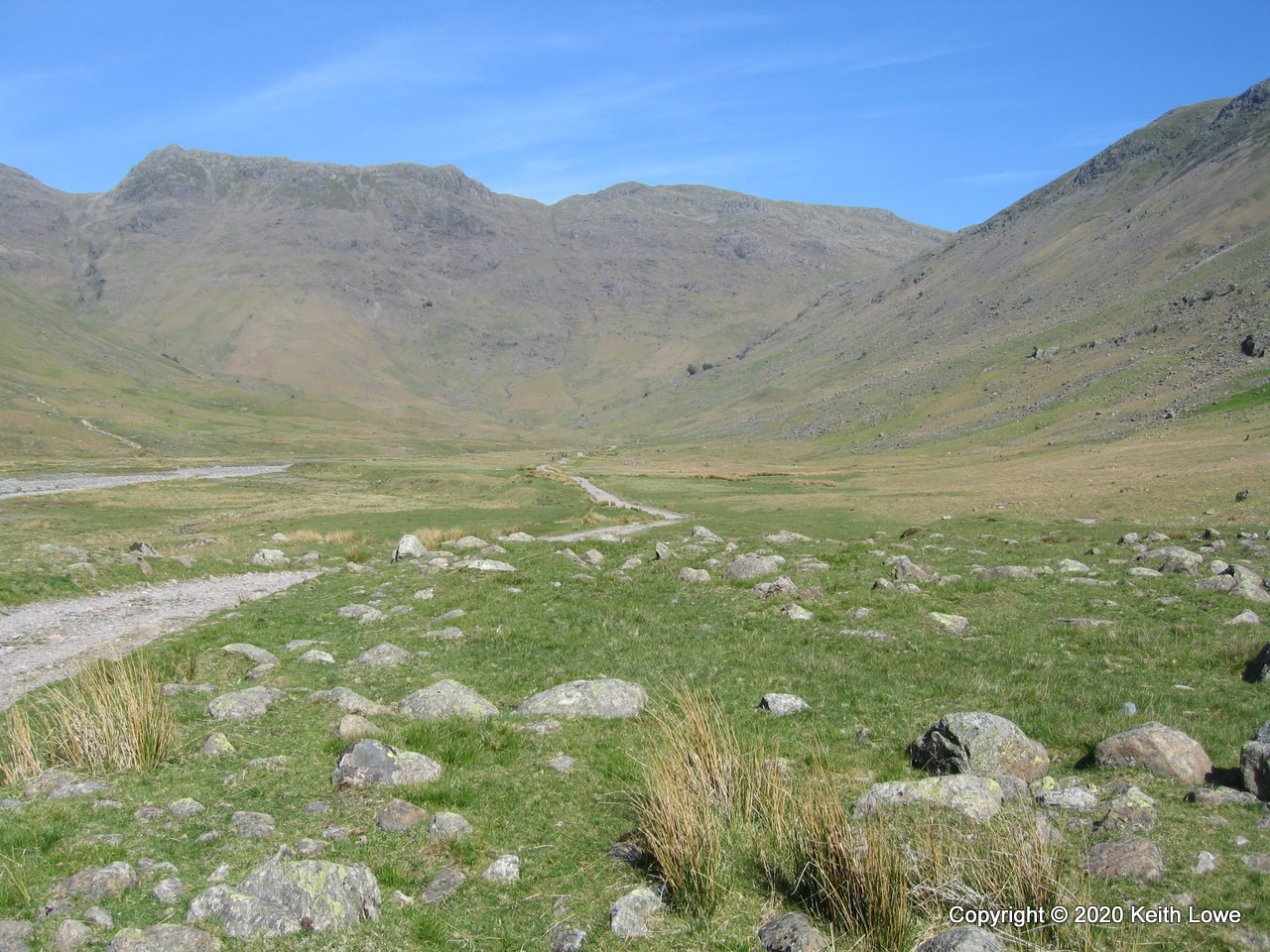 for some time until we arrived at the footbridge; 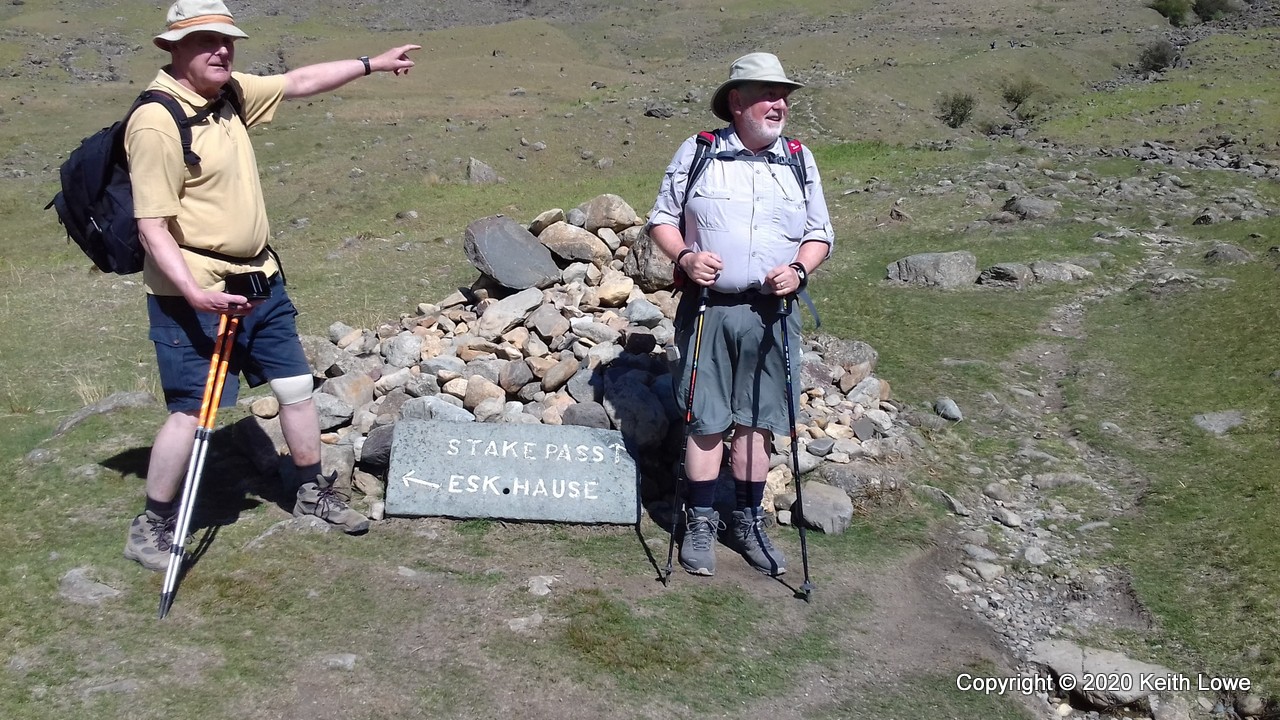 here was the direction stone with Stake Pass and Esk Hause on it.

After crossing the bridge we turned right at the bottom cairn to start our ascent. The path was well constructed, but steep in some places. 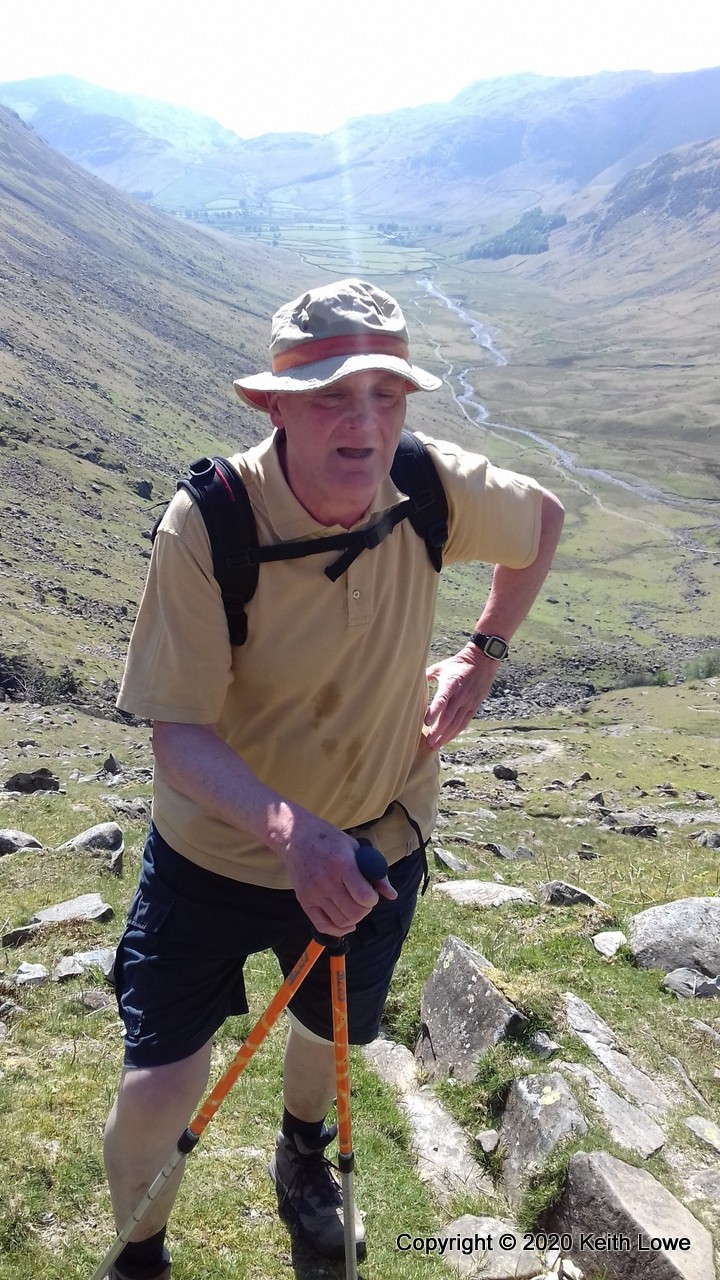 As we climbed there were lots of turning points 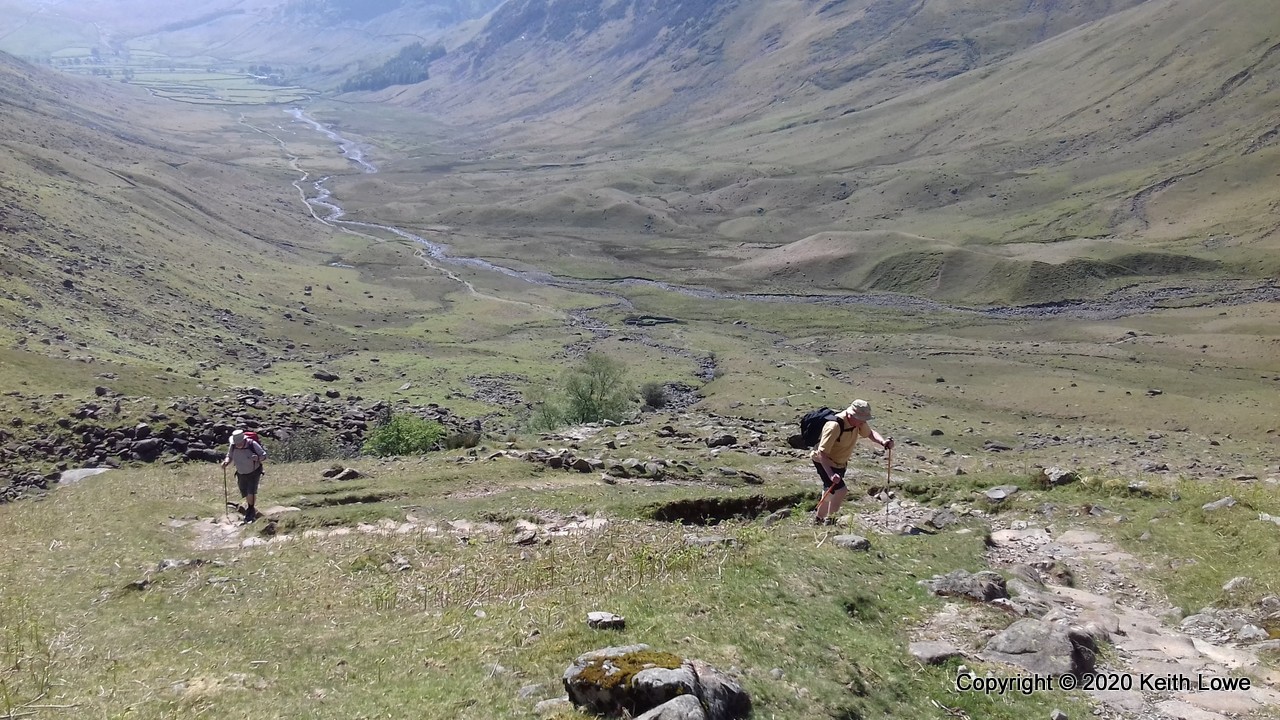 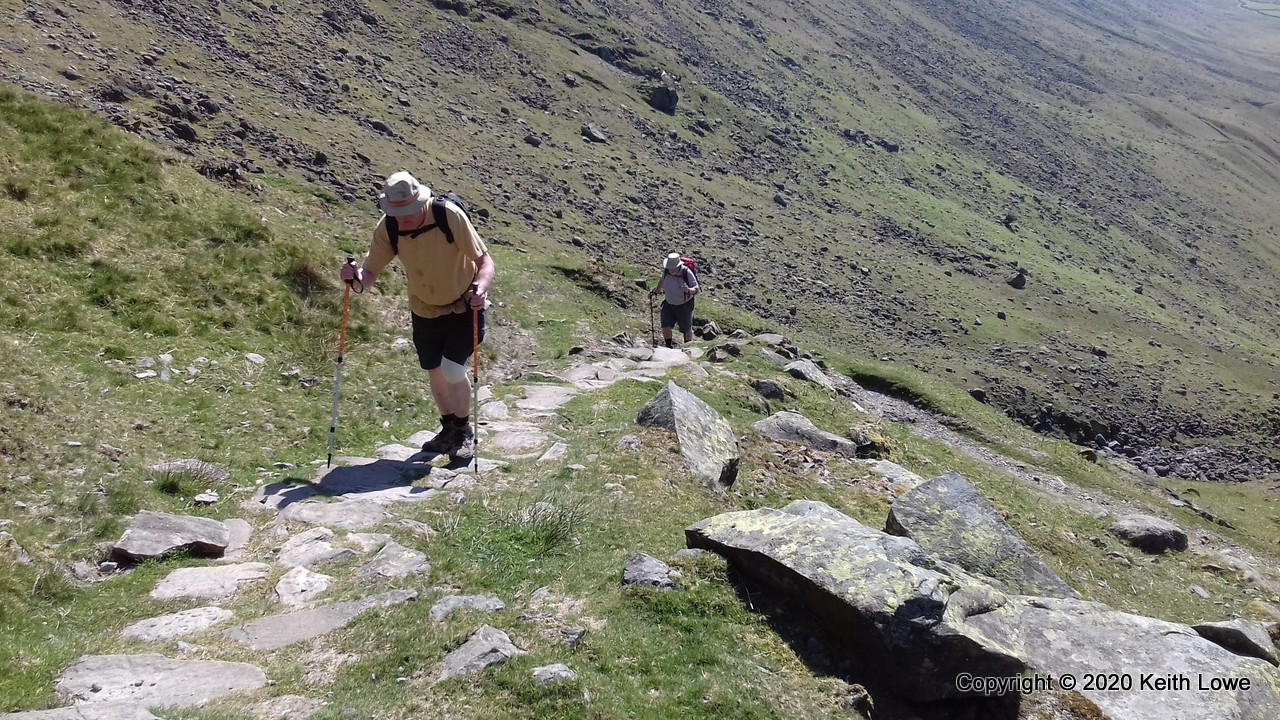 where we looked back down the valley at the fantastic views 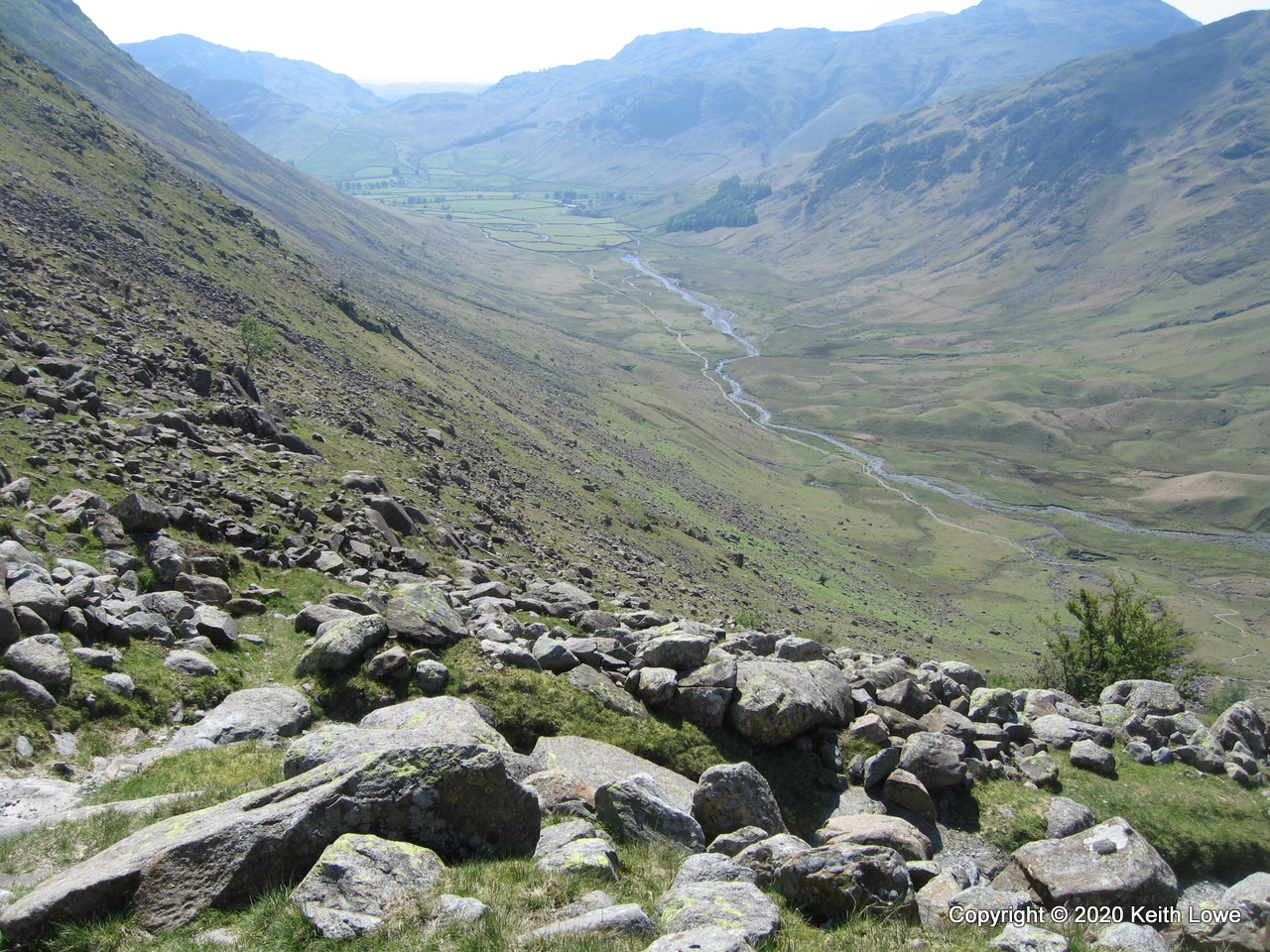 of where we had walked. The path continued up with more twists and turns until it felt a little easier, which meant we were entering Langdale Comb near the top. 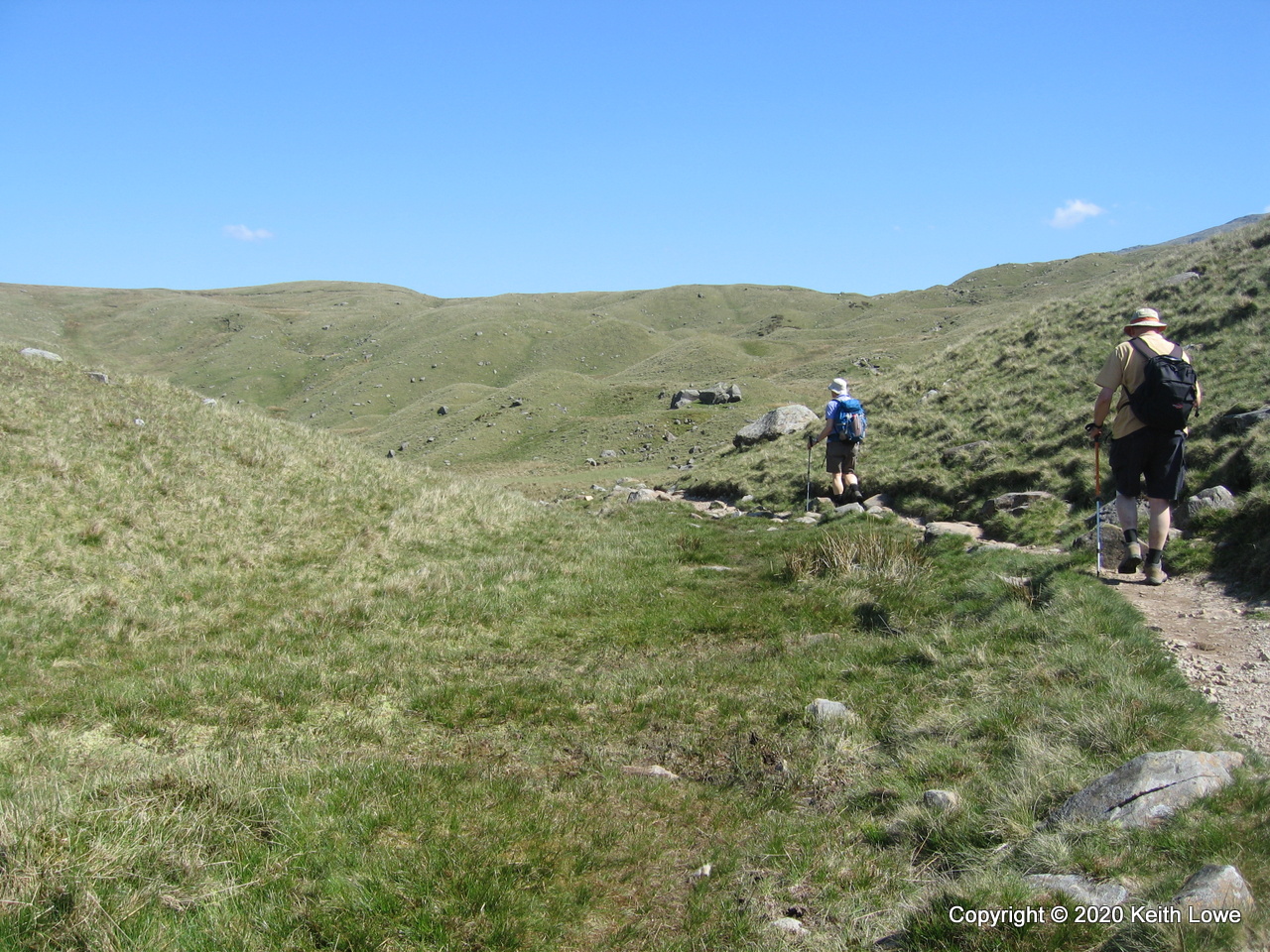 This part was made easier due to stepping stones crossing the beck and avoiding boggy areas. 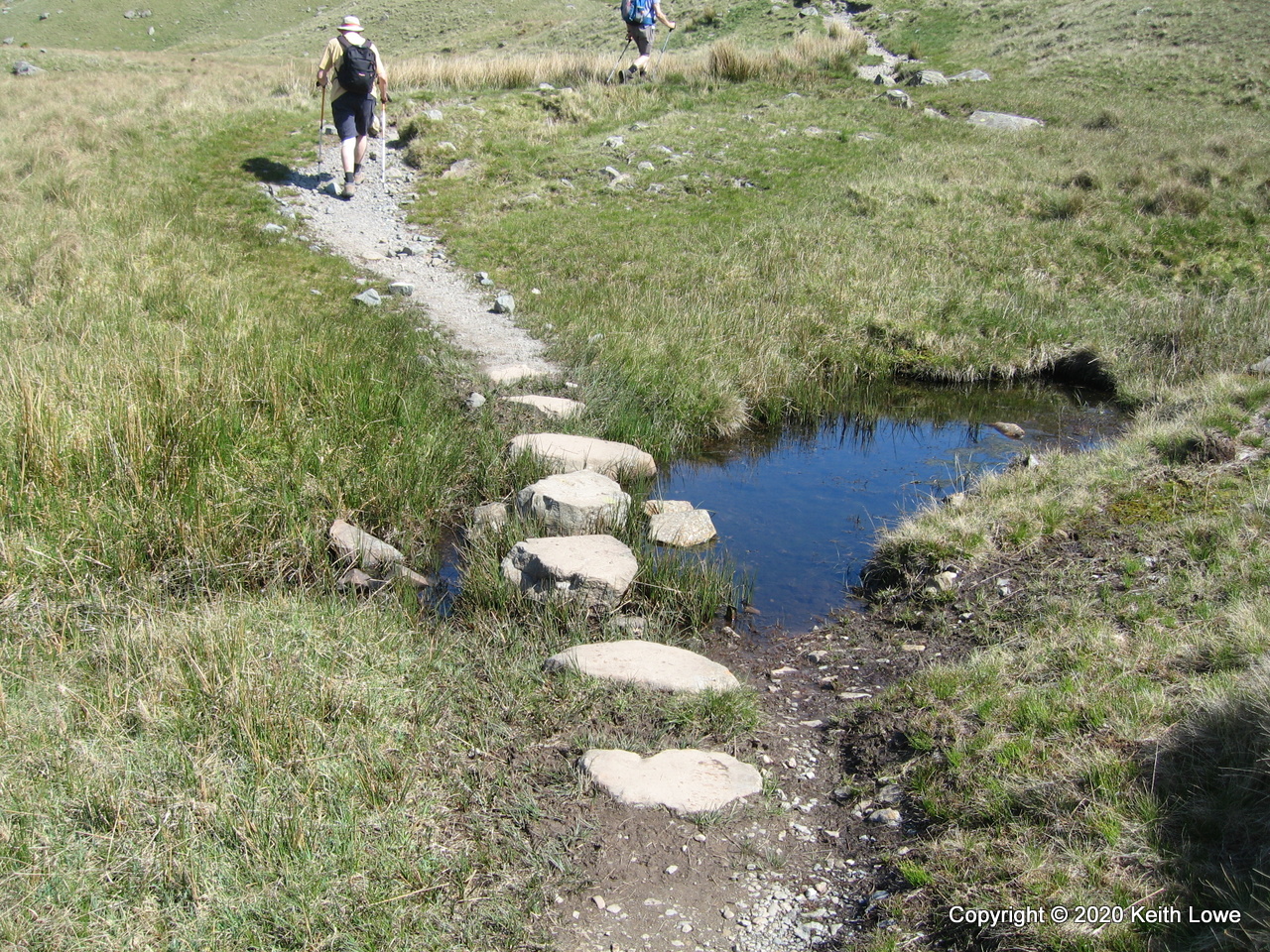 Still following the path we could hear people behind us and looking round we saw (Klemens & Valérie) we’d met on day one of the walk.

We talked with them for a while 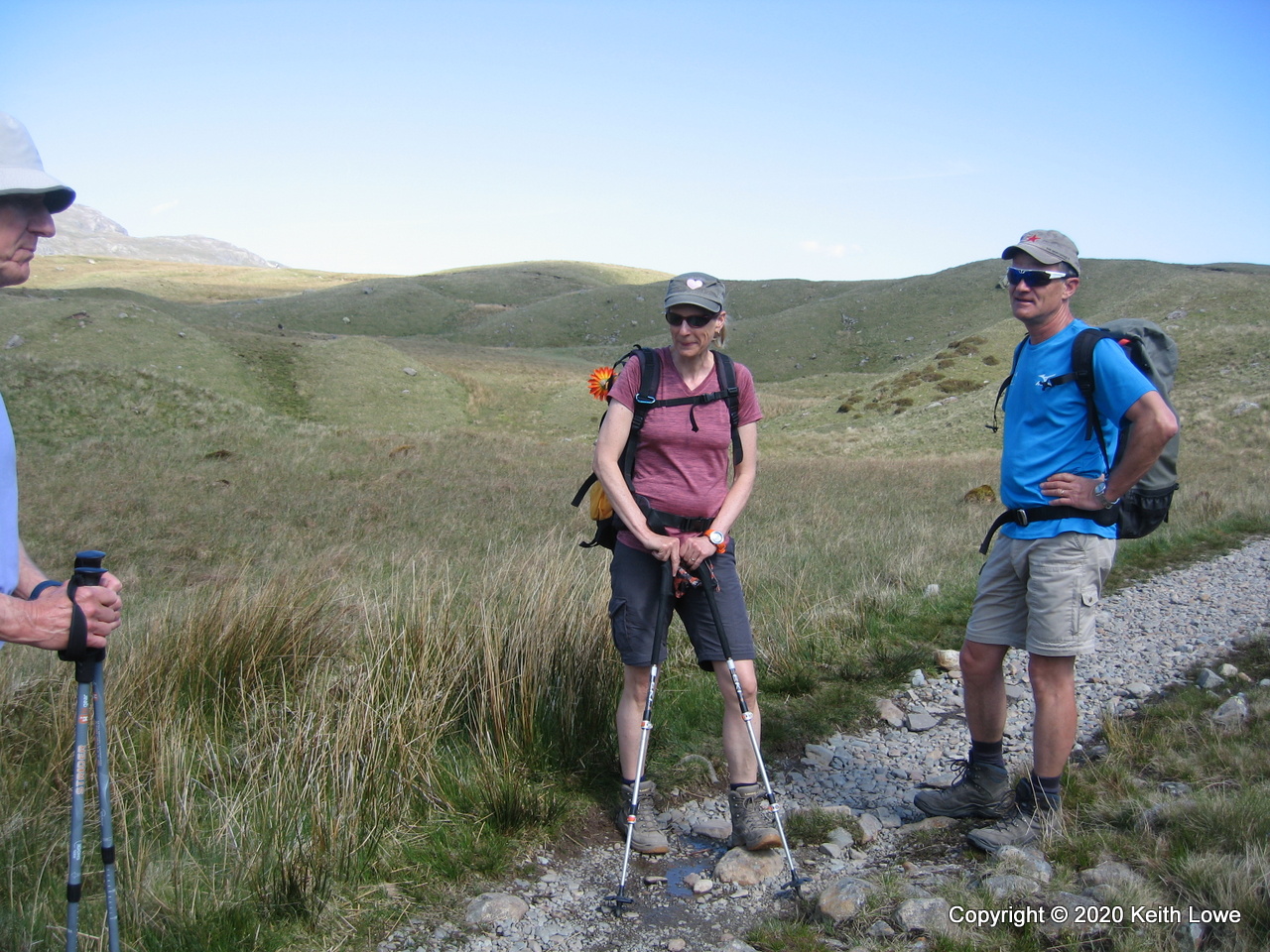 before continuing to the top cairn. When we arrived, sitting there were David & Iain, we’d seen earlier at breakfast, they were taking in the views towards Keswick. We chatted for a short time before walking on as it was getting windy here at the top.

We followed the path around the summit and as we were descending we saw a lone walker coming towards us. In conversation we found out he was on holiday and staying in the village of Rosthwaite, as he had done for the last 15-20 years. His walk was taking him as far as Loft Crag then Pavey Ark over to High Rise and back down to Rosthwaite. As we were about to leave he suggested we should walk on the opposite side (left) of Langstrath Beck as the path was more forgiving. We bid him farewell as he went on his way to the summit of Stake Pass.

We carried on walking until we found a place to shelter out of the wind and take a refreshment break. 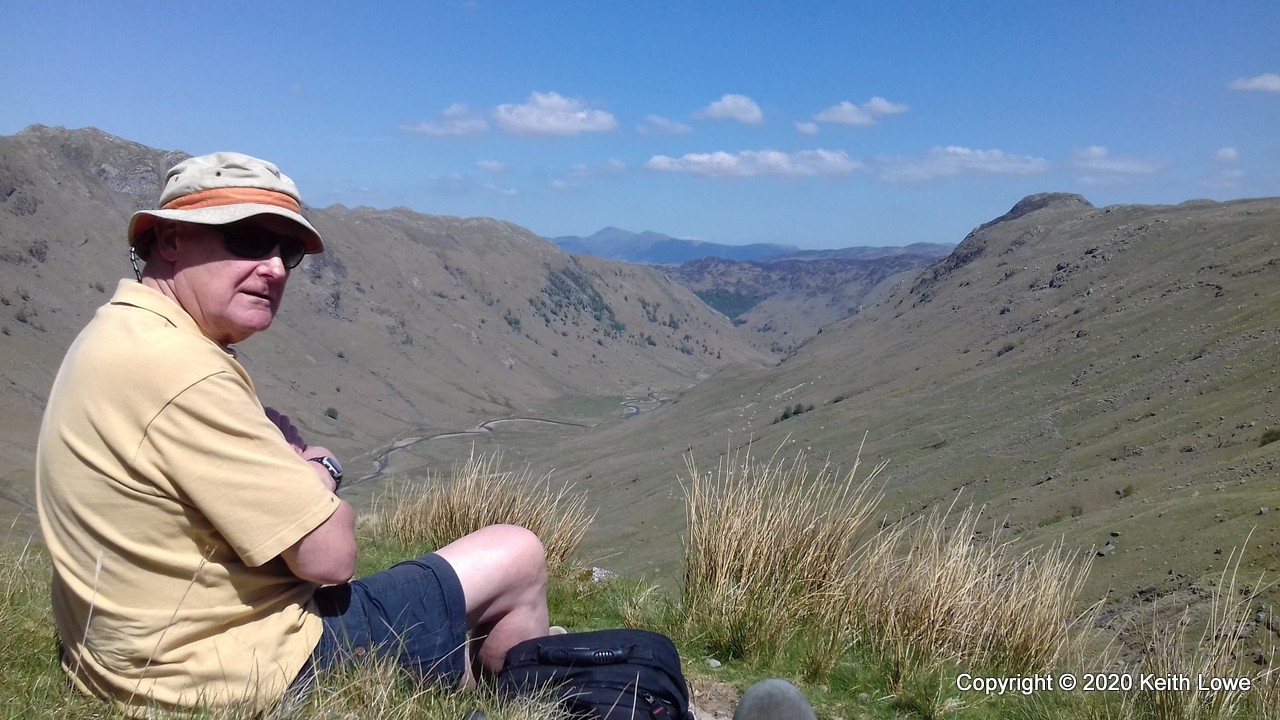 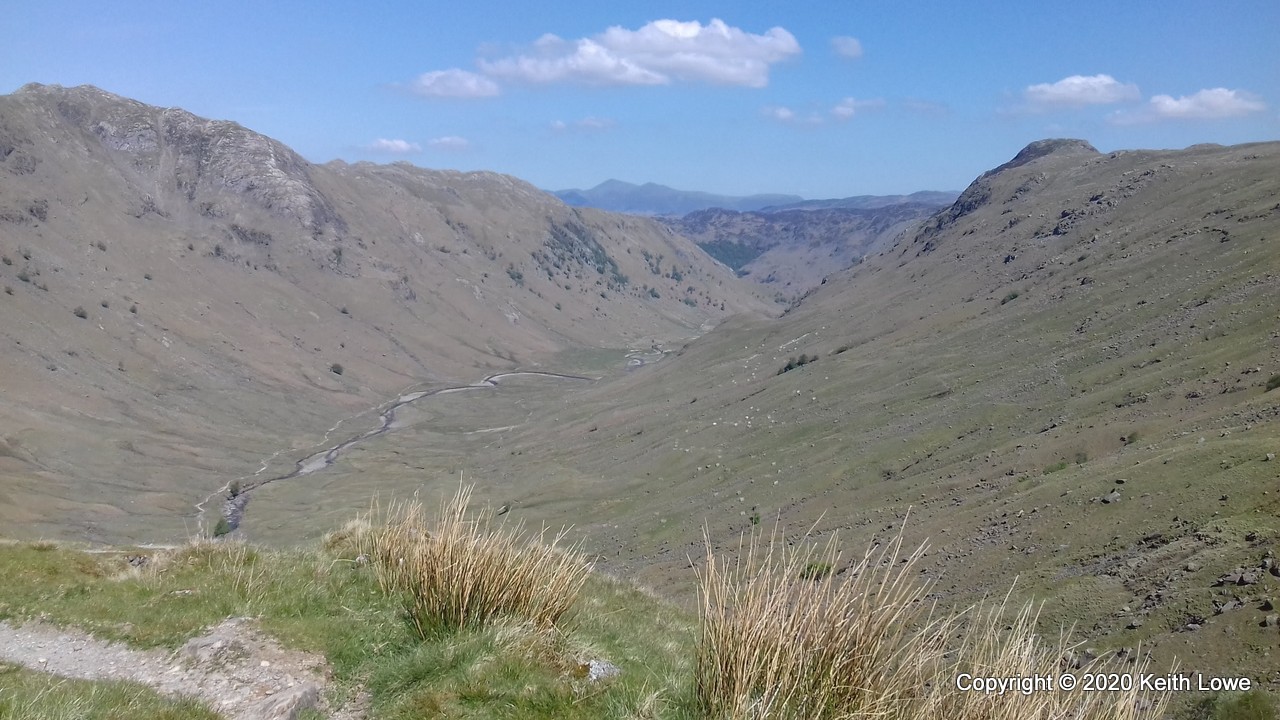 with the mountains of Blencathra and Skiddaw in the distance. The vista was magnificent.

Whilst resting, Derek had removed his boots to air his feet – as we all do – when he noticed the heel of one of his boots was breaking away from the rest of the boot. With this in mind we knew we had to take it easy on the descent. As we were resting, David & Iain who we saw at the summit passed us with a little friendly banter, and then two elderly ladies came past on their way up to the summit. In chatting they told us they were just walking as far as Stake Pass and Loft Crag before heading back to Keswick, where they lived. We bid them good-bye and they were soon on their way and out of sight.

Rest over we now had to start our steep descent down the narrow path, 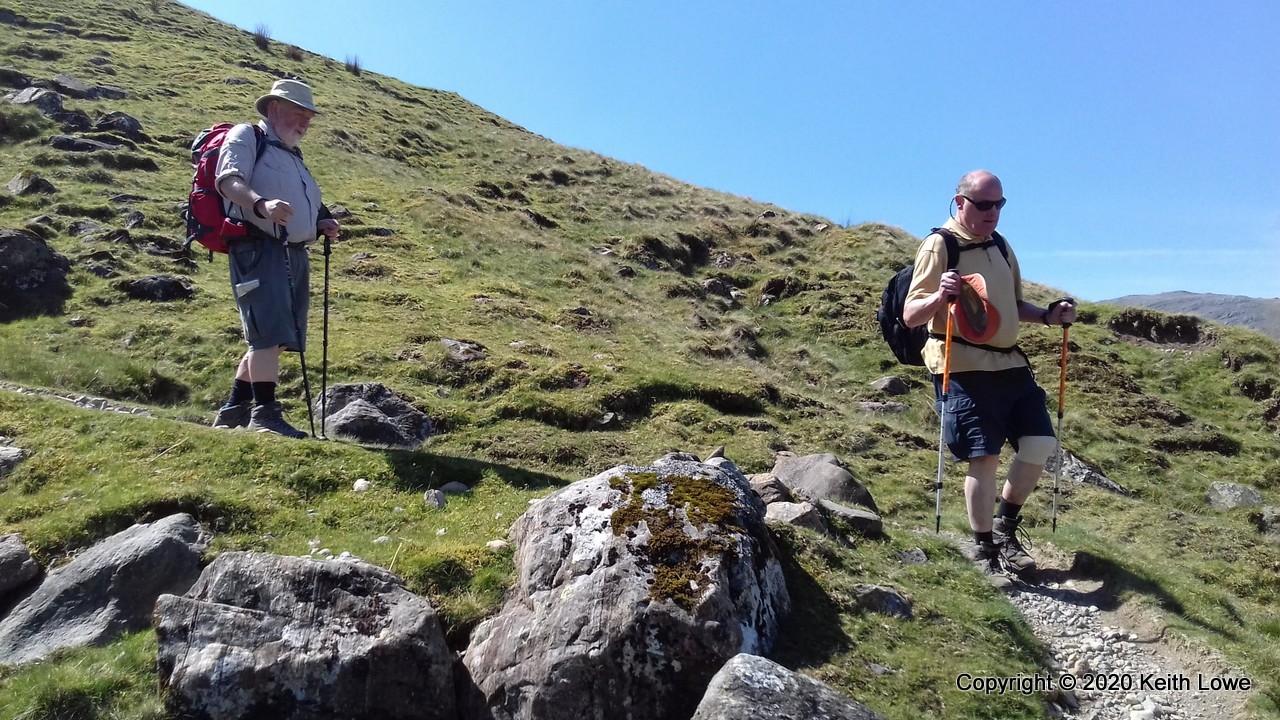 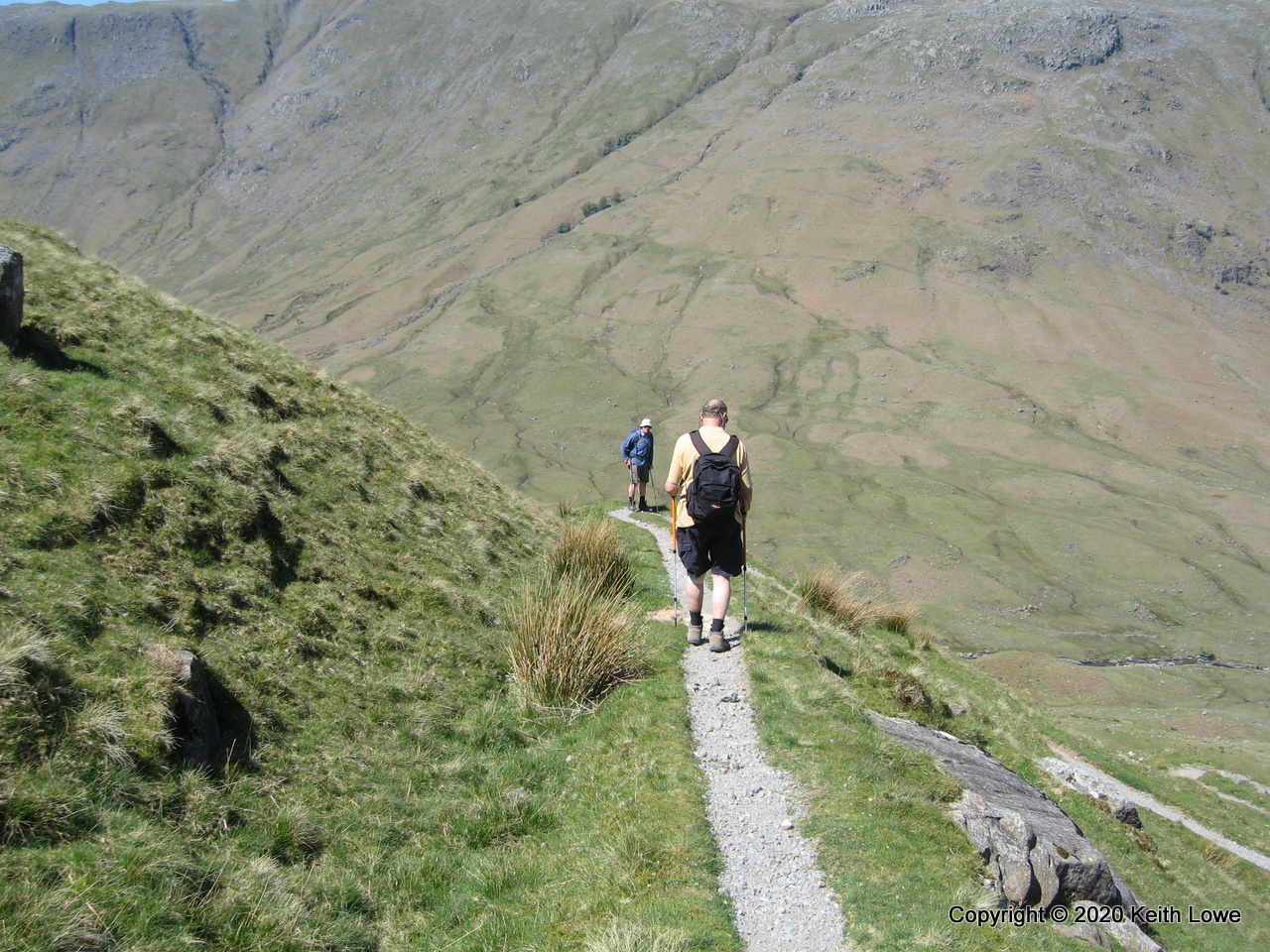 standing aside to let others pass on the way up. We were taking it easy as Derek’s knee was causing him some pain going down and he was probably worried about his boot. After about a good hour of descent, we arrived at the Langstrath Beck and crossing a bridge we found a place to rest up and have lunch.

We sat in a sheltered spot overlooking the beck with our boots off again. Oh what pleasure on such a hot day!

After forty minutes or so we were kitted up and on our way. All the hard work was done; we just had to follow the beck towards Rosthwaite, as suggested by the single walker we’d met earlier on. The path was undulating with small amounts of inclines, 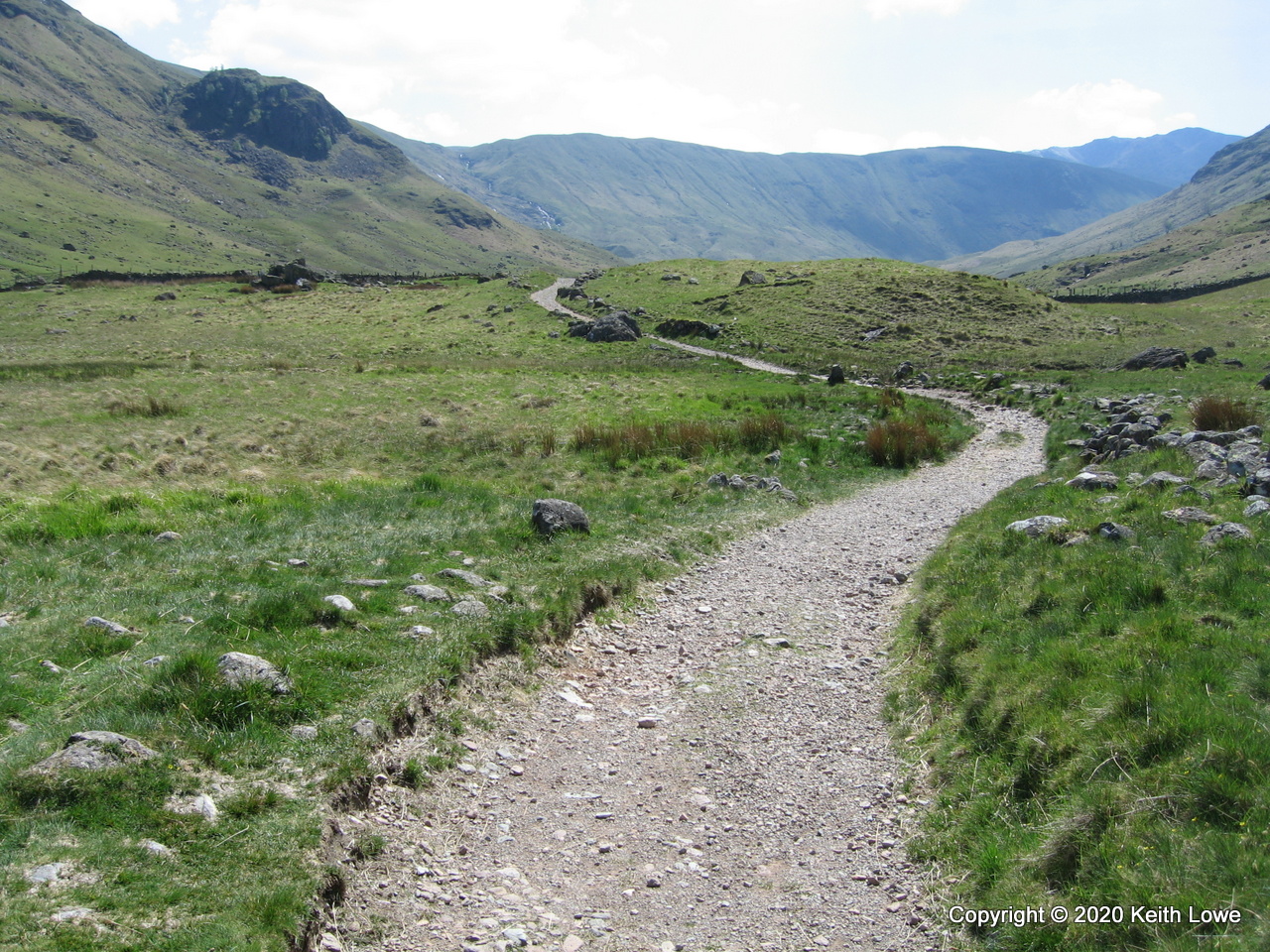 but not with as many boulders as were on the other side of the beck.

We arrived in Rosthwaite village and as we neared the main road we saw that David & Iain who had been at the summit were now in the grounds of the pub. They said they were too early to book in to the hotel so had decided to indulge in some refreshments.

We continued to the main road, crossed over in to a side road where a lady was collecting berries from the hedgerow, Steve asked her for directions to our hotel, she directed us across the fields into the village.

As we arrived in the back lanes we came upon a tea room where we had a pint of tea and a delicious slice of Borrowdale Tea Cake. The owner said we could sit outside under the canopy to cool off if we didn’t want to eat inside and he would bring out our teas. We decided, outside. As we walked around to the canopy there, in the shade, were Klemens & Valérie whom we saw at the top of Stake Pass. It was banter ahoy!

We sat with yet another fantastic landscape in front of us. It was heaven – a pint of tea, Borrowdale Tea Cake what could be better than this?

Fully refreshed we walked to our hotel (250 yds) and booked in. Now it was time to have a look around and check out the menu as there were no other places to eat. As we sat at a table outside the bar overlooking the River Derwent, there was a person sitting opposite, quietly reading, but within seconds he started asking where we were walking. It turned out he was from California, walking the Coast to Coast and would be meeting up with others later on.

Hearing where he had walked in America was fascinating. On the next table were two other gentlemen who had been listening to our conversations and joined in. They were from Glasgow and had visited the Lake District for the day to do some climbing. They were finishing their drinks before heading home that night.

After a very interesting and good-humoured conversation we headed back to our rooms to prep for our evening meal. At reception, Derek asked if the hotel could help with his boot issue. The said they would speak to the maintenance person the next day.

We met up in the restaurant/bar and sat down for our meal. Unfortunately, we couldn’t eat it all as there was just too much food. We had a drink to round off the evening before returning to our rooms for a well-deserved sleep.