This morning we met in the hotel lounge. Outside the weather was clear and sunny, no clouds to be seen. We made our way to the breakfast room which had now opened, were shown to our table and as we were selecting what to eat we saw a lady arriving with her friends. They sounded American from their accents. The one lady was not looking too good, she had a plaster across the bridge of her nose and two dark, sunken eyes plus a few cuts or scratches to her face. I assumed she had been involved in an accident.

The room started to fill with early risers dressed for another day’s walk. We also noticed across the room David & Iain whom we had seen since starting the walk.

After breakfast we left to prepare for our day, wishing David & Iain a good day’s walk. Derek headed to reception to sort his boots with the maintenance staff.

We meet up outside the hotel after handing in room keys.

Outside, a couple of the American women who were friends of the injured lady were chatting. Joining in the conversation, they explained to us that they were walking the Coast to Coast path, west to east. Near Ennerdale, they were climbing over a stile when their friend stumbled and fell, hitting her face on the ground which led to her being taken to hospital. Consequently, their plans were now that the injured lady would go by taxi to Grasmere whilst the others walked on over Eagle Crag and the tops to meet up again in Grasmere.

We wished them all a safe journey and hoped their friend would soon be on the mend.Derek’s boots were sorted, everything felt good. Today was going to be a more leisurely walk as we only had eight miles of low level walking following the shoreline of Derwentwater.

As we set off, we met up with the solitary walker we saw yesterday at the top of Stake Pass, whilst we were heading down into Langstrath valley.

We had a brief chat and he told us to look out for a small section of headland jutting out on the side of Derwentwater where it was quiet, not many people knew of it. He told us we could stand on the headland and see the length of Derwentwater with views of Blencathra and Skiddaw in the distance. We thanked him for the advice, we would certainly look out for it.

Now we were off to rejoin the path we were on yesterday. 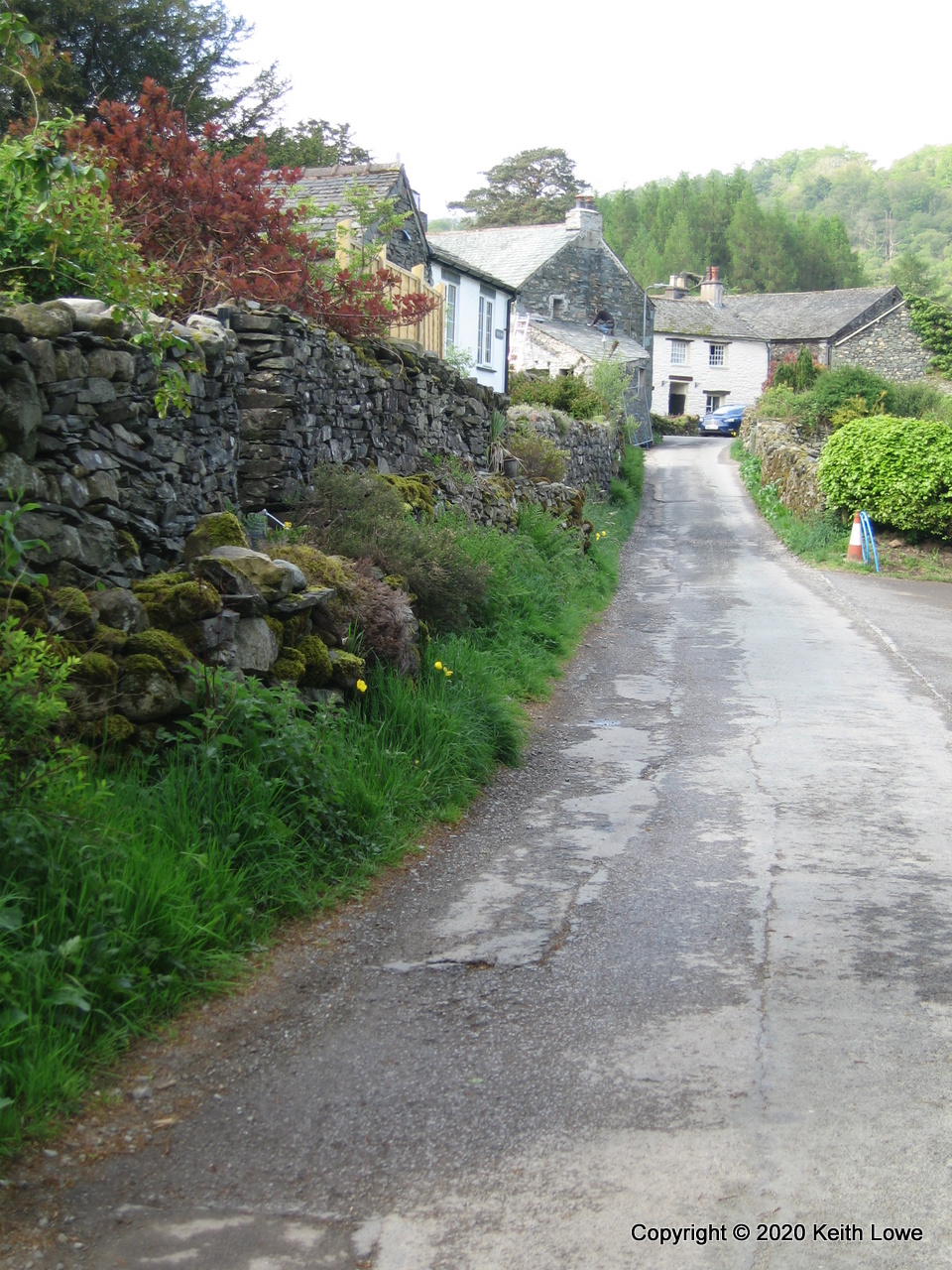 Passing Yew Tree Farm we crossed over the River Derwent via the stone bridge, then turning right to follow the river towards Keswick. 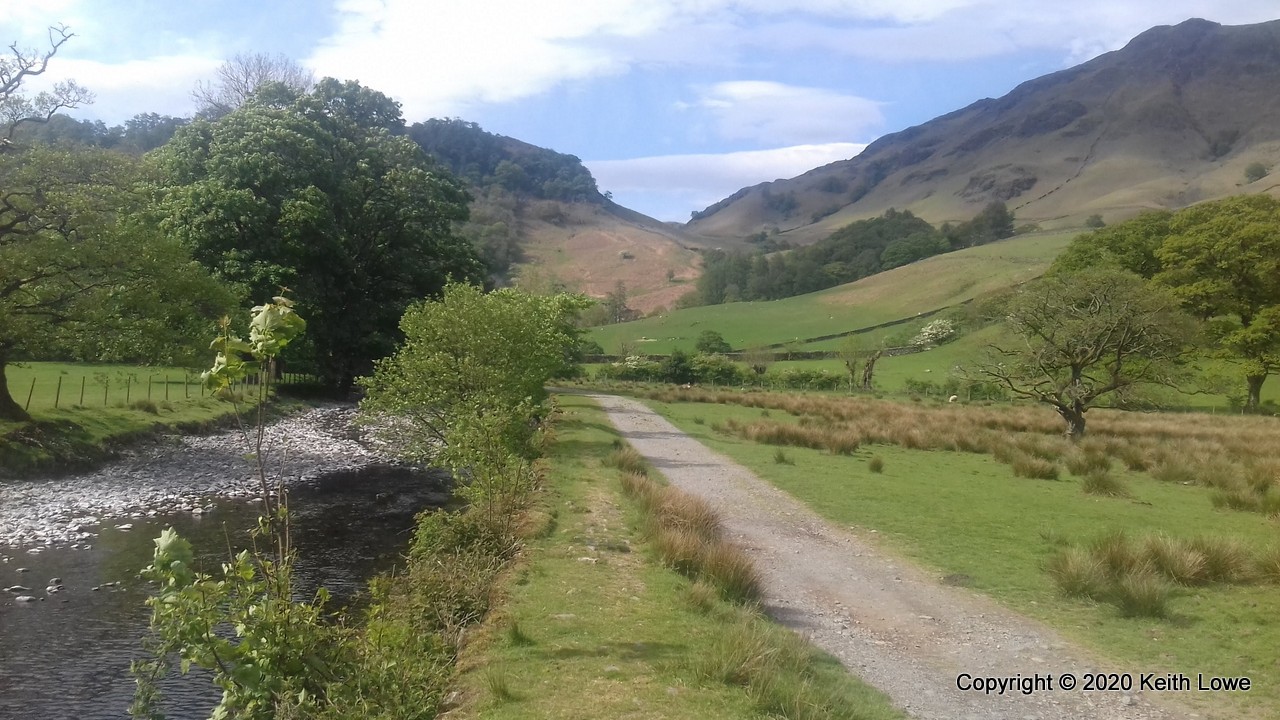 As we followed the route, it led into a woodland area and below Castle Crag.

I thought to myself that as today was a shorter walk, we could take a detour to follow the path up Castle Crag (a place I’ve never walked), or later on we could walk up Cat Bells as we neared Keswick, but as we were unsure of how long Derek’s boots would last, and bearing in mind the issue with his knee, it wouldn’t be a good idea, so I dismissed the thought.

We continued along the path with the river back in view, when we came across a campsite. There was no one around, it must have been too early for them, about 10ish.

We arrived at a road junction; the fingerpost was directing us towards Hollows Farm and the Cumbria Way. We walked through the farmyard passing the main house and accommodation buildings for B&B. It was quiet, not much activity and no animals. This felt strange as you would expect to see barking dogs or cattle/sheep on a farm. Across the yard there was a gate which opened on to a path leading up a short incline.

At the top was a small seated monument 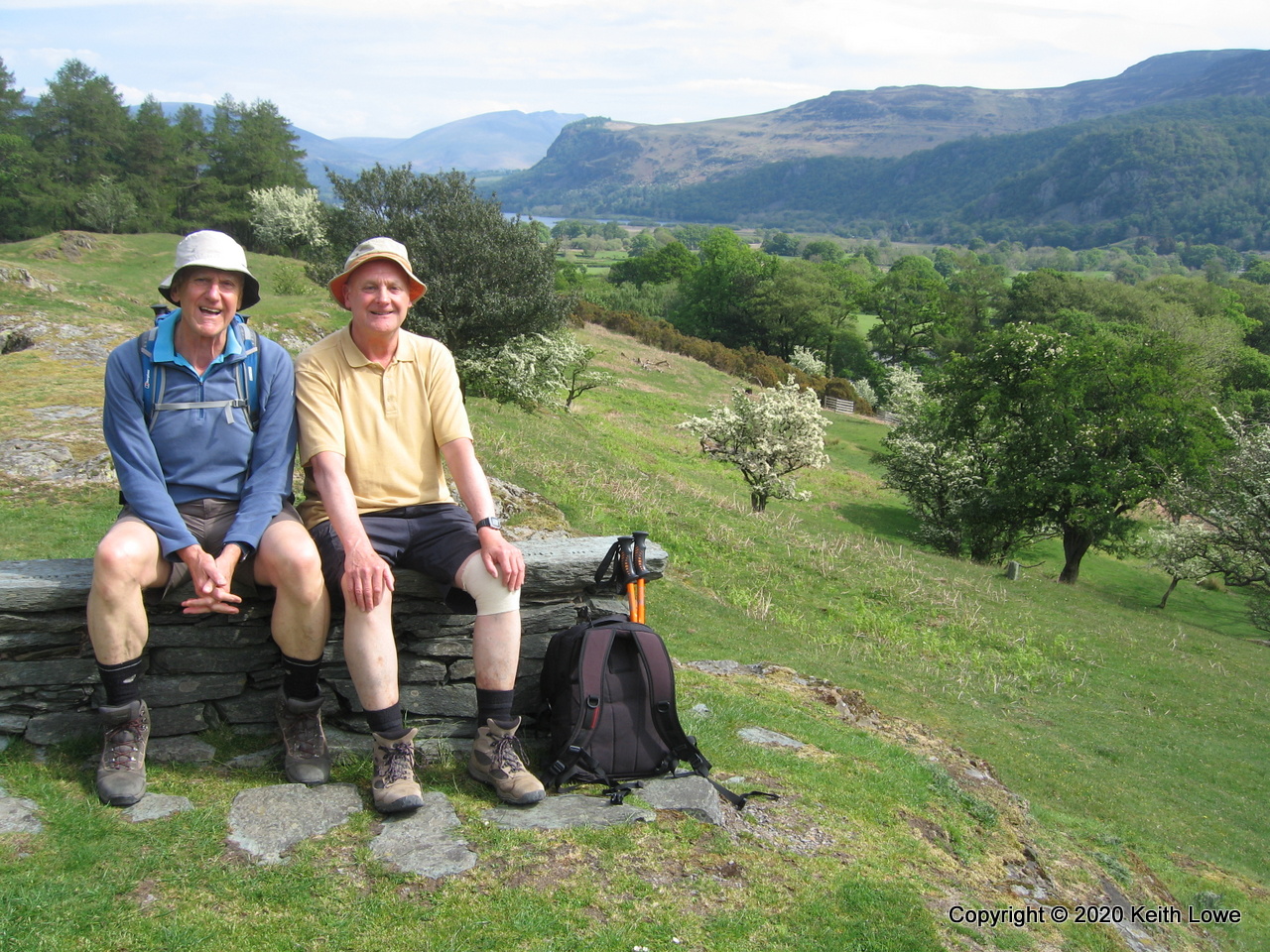 which we took advantage of for a short refreshment break whilst admiring the views of the village of Grange below us, and of Derwentwater, High Seat, Ashness Wood, Bleaberry Fell and Walla Grag in the distance. It was incredible.

After our respite we joined the path leading down to Grange and at the roadside we turned left heading towards Keswick. At this time of year the blossom was in full bloom and looked brilliant. 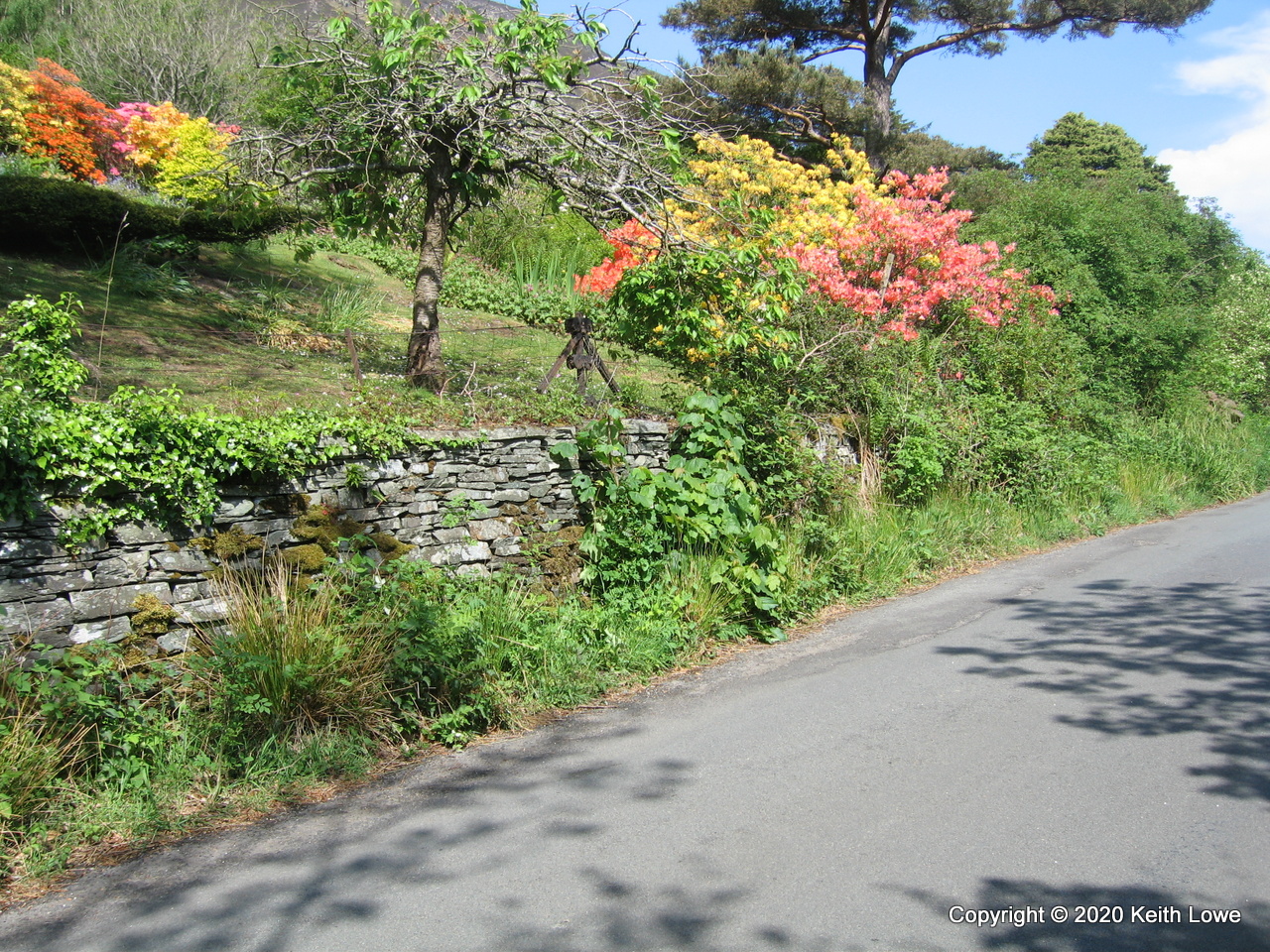 We followed the road for about half a mile until we saw the sign for the Cumbria Way and Manesty Wood. This led us to the very tip of Derwentwater, to an area known as Great Bay; it was in this area we had to look out for the headland we had been told about.

We eventually found it. It was brilliant, with clear skies and stunning views at the water’s edge

looking towards Keswick with the mountains of Blencathra (2847 feet high) and Skiddaw (4th highest in England at 3053 feet high), like sentinels guarding the town.

We did take a few photos as expected but moved on as the wind was picking up and the temperature was dropping. We set off to rejoin the path which now led us to the lake shoreline with an easily identifiable path to follow. As we walked through Manesty Wood more people were appearing, just strolling along and taking it easy, enjoying the day. We soon arrived at High Brandlehow Jetty, one of the landing stages for the steam launches that run circular trips around the lake. As we arrived, there were a few people waiting and a launch was just arriving. We continued along the path in Brandlehow Wood; at times, looking to our left, we could see walkers descending from Catbells in the distance. We proceeded towards Low Brandlehow Jetty with a clear view of Walla Crag on the opposite side of the lake. This landing stage was silent – no one waiting for the launch, no boats, just peace and quiet. Lovely! Carrying on along the path we came across a large wooden cupped hand which, I believe, was produced for the millennium celebrations and is positioned just before the landing stage at Hawse End. A couple of passing walkers agreed to Steve’s request to take a picture of us in the hand. 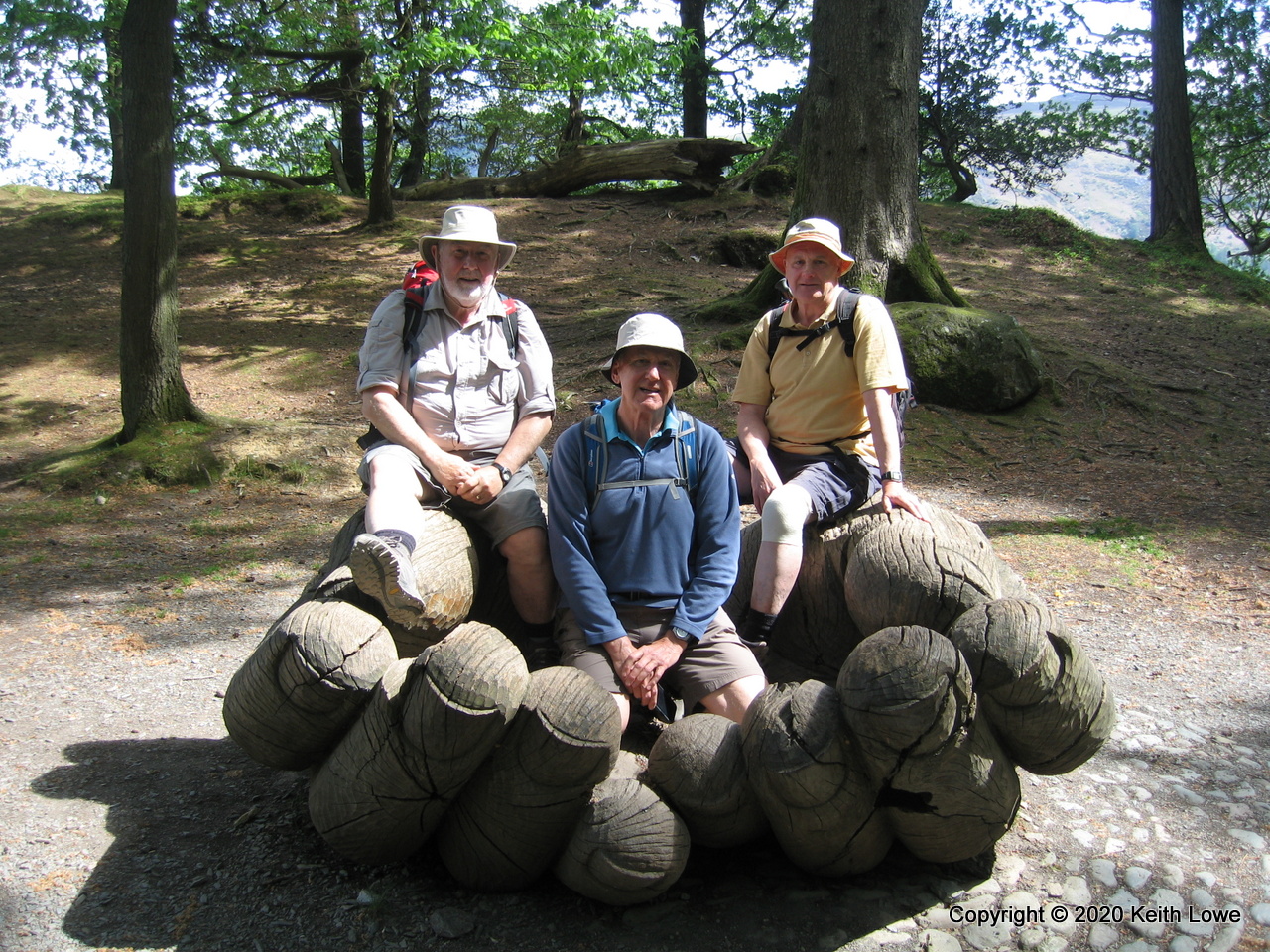 We continued our walk joining a road for a short distance before seeing the signpost for Cat Bells and Lingholm. We turned right, entering another wooded area towards Lingholm & Portinscale.

Along the path we came upon a large garden in which, to our surprise, were alpacas, so I just had to take a photo as there aren’t many alpacas in Keswick.

Walking through the woods we passed by a boat yard to join a road leading to Portinscale and it wasn’t long before we arrived at a cafe’ that Steve and I visited in 2012 when we first did the Cumbria Way. It has since been extended so is now much larger and could comfortably accommodate a lot of people.

We stopped for lunch and after our Mediterranean Spice Soup with homemade bread and a pot of tea we were now on the last section of today’s walk to Keswick.

We passed the Derwentwater Hotel, then crossed a suspension bridge over the RIver Derwent. We followed a short riverside path between two fields before turning right and seeing the sign pointing to the town. We came out opposite the famous Keswick Pencil Museum and turned right towards the centre to find our hotel for the night.

We had arrived in the market town of Keswick. It received its market charter from Edward 1st in 1276 and there’s been a weekly market here ever since.

In the 16th century graphite was worked locally and the world’s first pencils were produced on a small scale up until the opening of a factory in 1832. A second factory was later started in 1920, and completed in 1950, but it closed in 2007 when production moved to Workington so the Keswick site became a museum.

In December 2015 the museum was severely damaged by flood water when the River Greta broke its banks as a result of Storm Desmond and many artefacts were destroyed. Keswick is popular with tourists, walkers and climbers; in fact anyone who is involved with the outdoors and adventure.

We booked in at our hotel and then had a stroll around the busy town. Unbeknown to us, the famous Mountain Festival was taking place over the weekend, with some fun activities going on in the town square.

We checked out various places to eat and bought post cards to send home, along with finding the start point for the next day. Our bodies were rehydrated before returning to the hotel to shower and rest.

We met in the hotel reception prior to heading off for our evening meal. It was early and the town square was still busy although the stands and equipment were being packed away in preparation for the regular Saturday market the next day.

After a short stroll we found a pleasant, yet busy, hostelry where we could discuss the day’s walk and check out how Derek’s boots had fared up, knowing that tomorrow was to be the longest and toughest walk of the week.

We were going to be climbing up Great Lingy Hill at 616m high and then on to High Pike, 658m.

From here we walked around Keswick only to find that most of the bars/restaurants were busy due to the festival. We eventually found a place at the top of the town. It was packed, but a gentleman was just leaving as we arrived, so we grabbed the table. Now pre-dinner drinks in hand, it was time to sort the menu; this was easy as they were serving Cumberland Goulash and very tasty it was too.

After our meal we walked over to Derwentwater Lake where the festival was in full swing. At the lake, Steve and Derek walked on to the end of the path to take in the night views looking back to Castle Crag and Rosthwaite. I stayed near the festival, listening to the music and watching someone swimming from the end of the jetty, until ‘the boys’ returned. We then headed back to the hotel for a goodnight’s sleep.