This morning we up early and stepping outside on to the main square there was a lot of activity with stall holders setting up for today’s market. The weather was dry but with the forecast for possible showers, or even rain, this was potentially to be our wettest day.

We meandered back into the hotel as the dining room was now open. As we were looking at the menu, David & Iain appeared. We ordered breakfast and were soon tucking in to a hearty meal. We needed to eat well as on today’s walk was the longest section where there’s nowhere to purchase any food or drink. The only possible place to eat is at Skiddaw Youth Hostel (YHA), but this is not always open till later as guests are arriving.

It was still early when we checked out of the hotel but some of the market stalls were near completion and customers were beginning to look around.

We set off to find somewhere to buy a packed lunch and on the way out of Keswick we came upon a bakery which was open. Heading towards the leisure centre (another part of the route that has been changed, the original way was past the pencil museum), there were more and more people about. As we walked around the back of the centre we saw what looked like hundreds of runners all exercising for a race – leg stretching, leg swinging, body twisting; it all seemed a little too energetic for this time in the morning. and a climb that took us the best part of three quarters of an hour due to the steepness of the track. The path continued through Latrigg Woods, still climbing but later became a little gentler. As were climbing there were many places to look back over – Keswick, Derwentwater and the fells of yesterday and at times Bassenthwaite Lake to the north. We went along the path till we reached a road and turning right we were in a car park looking for the sign directing us to Skiddaw, at 3053 feet high. Turning left at the sign we followed a walled section until we reached a junction and ahead was the path leading to the summit of Skiddaw itself. Whilst we stopped to take in the sight of people walking up the mountain, a man carrying a rucksack and a large aerial, came up from behind. He enquired if we were walking the Cumbria Way and we, in turn, asked about his equipment. Apparently he was an amateur radio enthusiast and was heading up to the summit so he could contact friends in other areas of the Lake District. He told us a little more about his hobby – which sounded interesting – before saying our goodbyes. We continued along the path to Lonscale Fells with views to Whinlatter 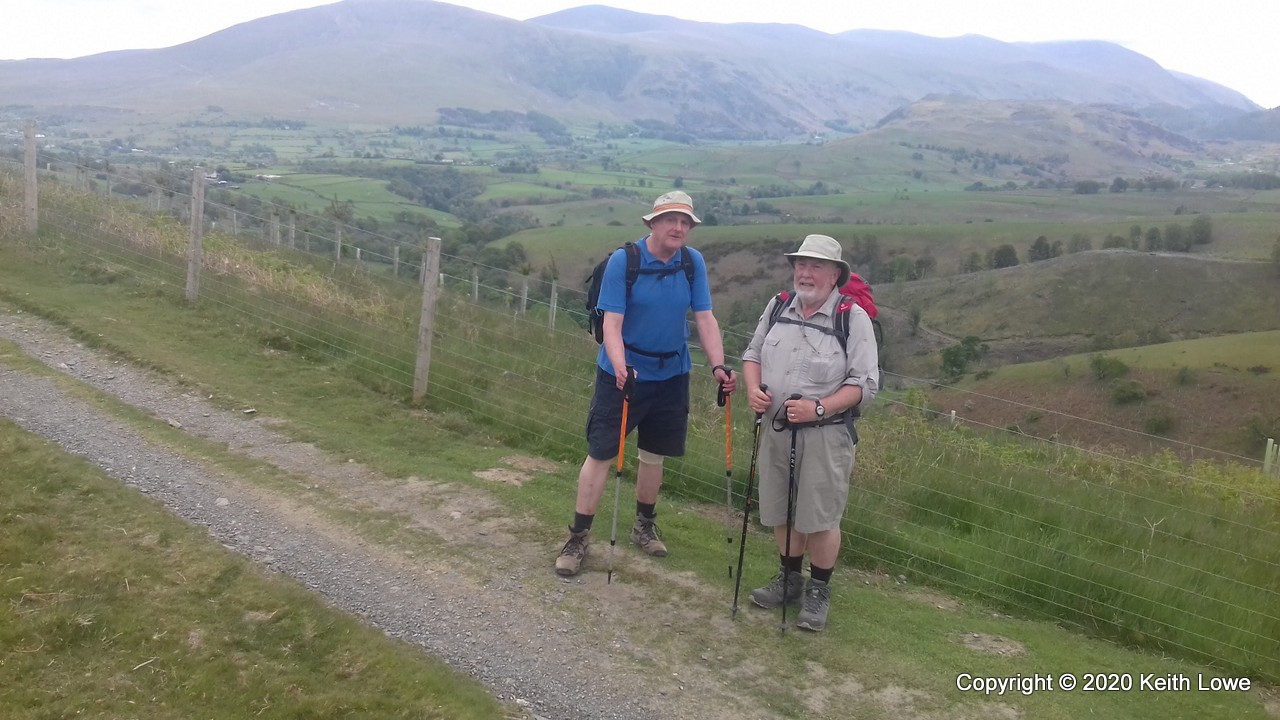 and the Vale of St John’s, plus Thirlmere and Ambleside in the far distance.

The track swings left into the valley of Glenderaterra Beck and meets a rocky section with steep slopes to the right. 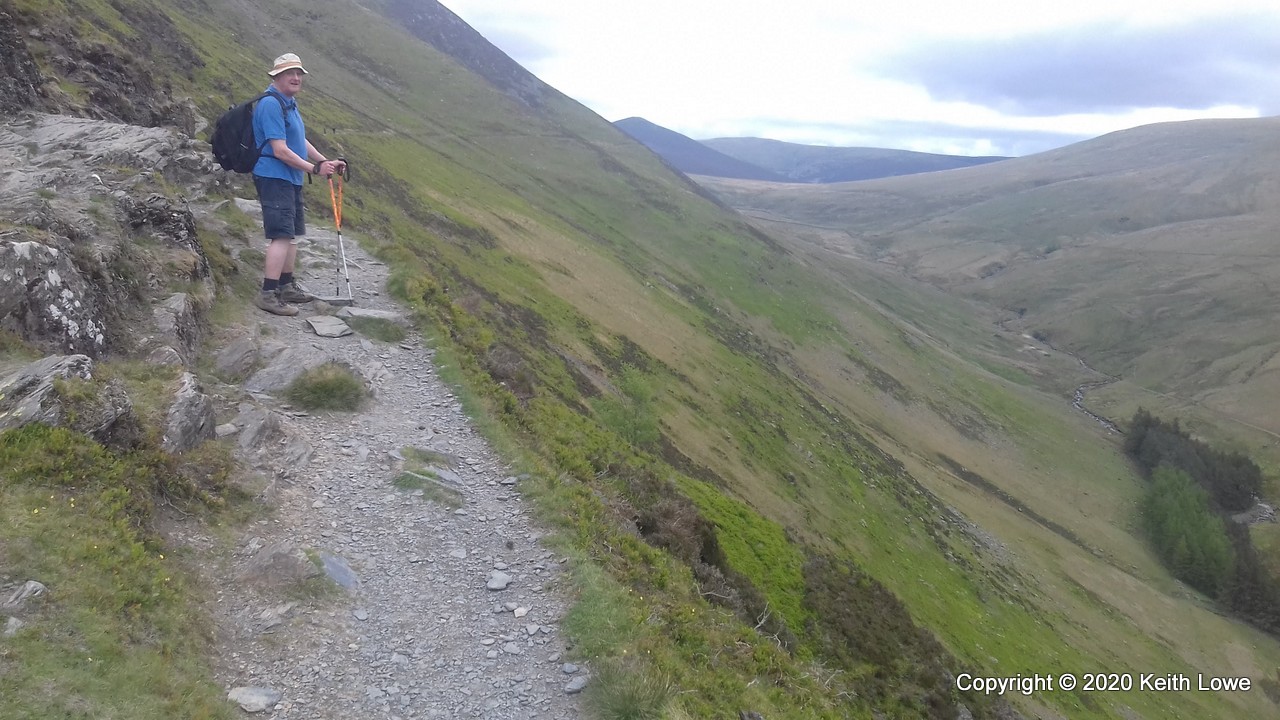 Looking ahead we could now see Great Calva with its conical shape in the distance; from here the path becomes much easier and less stressful, a relief for those who don’t like heights. As we stopped to take photos, looking behind we could see two walkers following. By the time we had finished taking picture they were upon us, it turned out to be Klemens & Valérie. 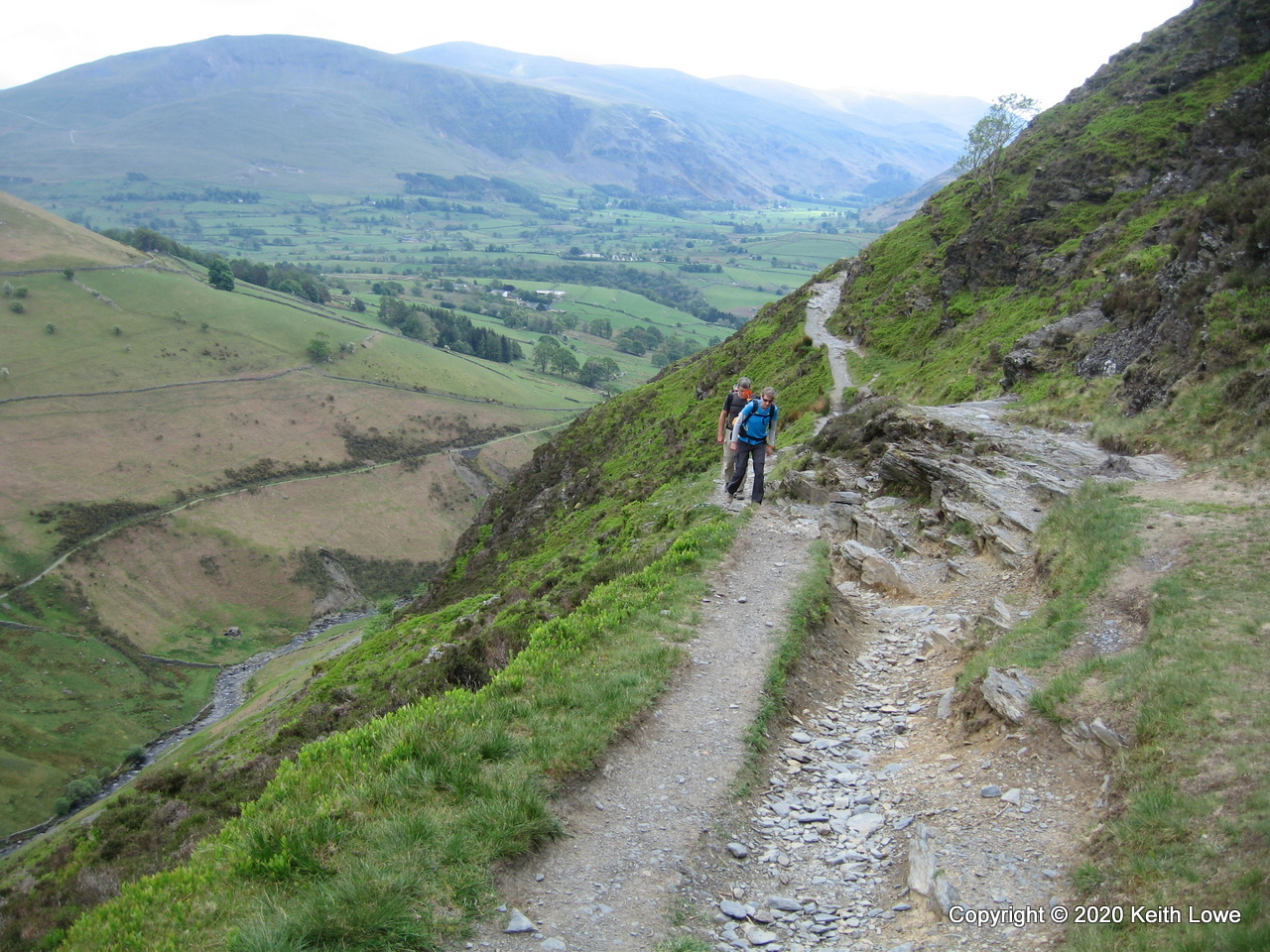 We had a brief chat before they left us and wished them well as they continued on at a faster pace, soon to become dots on the horizon.

We arrived near Skiddaw House YHA 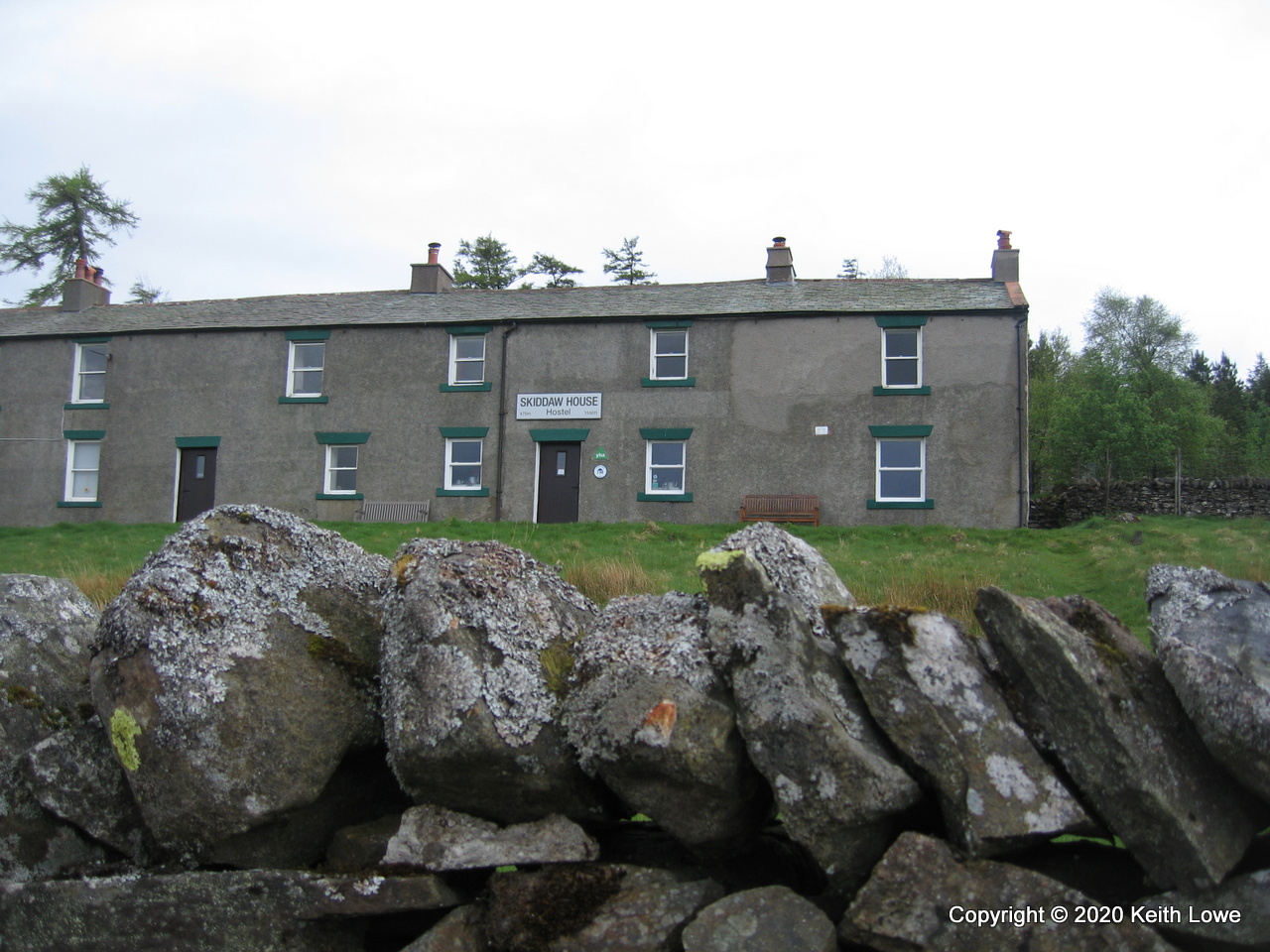 where we had a refreshment stop. It was amazing to see people walking/cycling being friendly and chatting, whilst others ignore you and treat you as though you’re invisible.

As we were taking our break a lone walker came by. He was from San Francisco, USA and was a pleasant person who was walking the Cumbria Way. He was carrying his Ipad, which had his map on it, and he was also carrying camping equipment, so if he decided to camp he would be fine.

He told us some of his walking history, how he had walked various places in the Rockies and Yosemite Park in all the different seasons. He wasn’t bothered by being on his own, or by low cloud and mist as he had experienced bad weather on several occasions. After his friendly chat he left to find a place for a quiet lunch. Soon after we set off we saw him again next to Salehow Beck taking a break. We bid him a good day and carried on; later he overtook us and we watched him disappear into the distance. 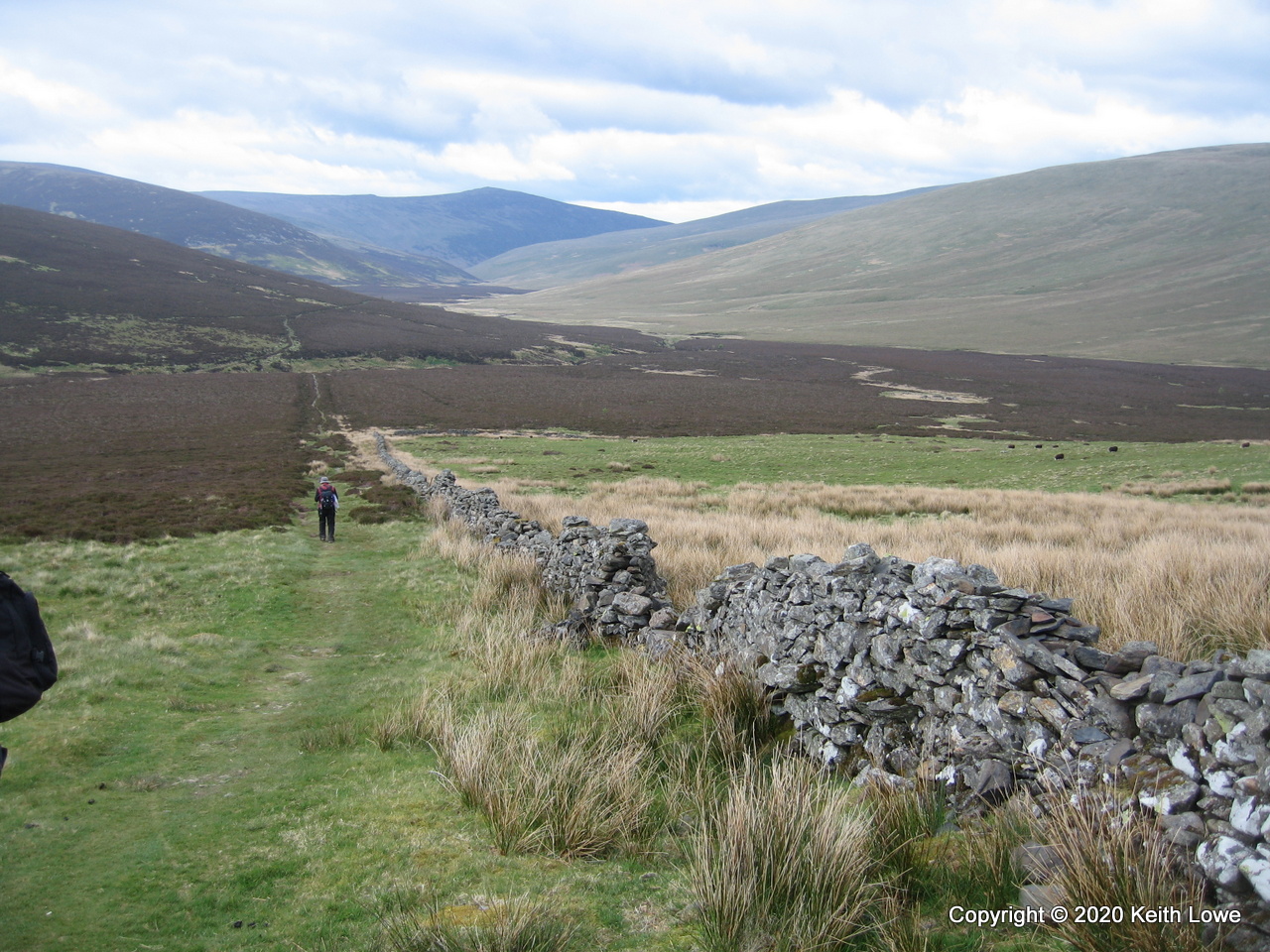 We followed on, crossing various streams and footbridges on a well defined path with Carrick Fell on our right. Two walkers with large rucksacks were heading to the top of the fell and they gave a friendly wave.

We now continued along a good wide path, running parallel to the River Caldew below us till we saw a public bridleway sign for Millers Moss. 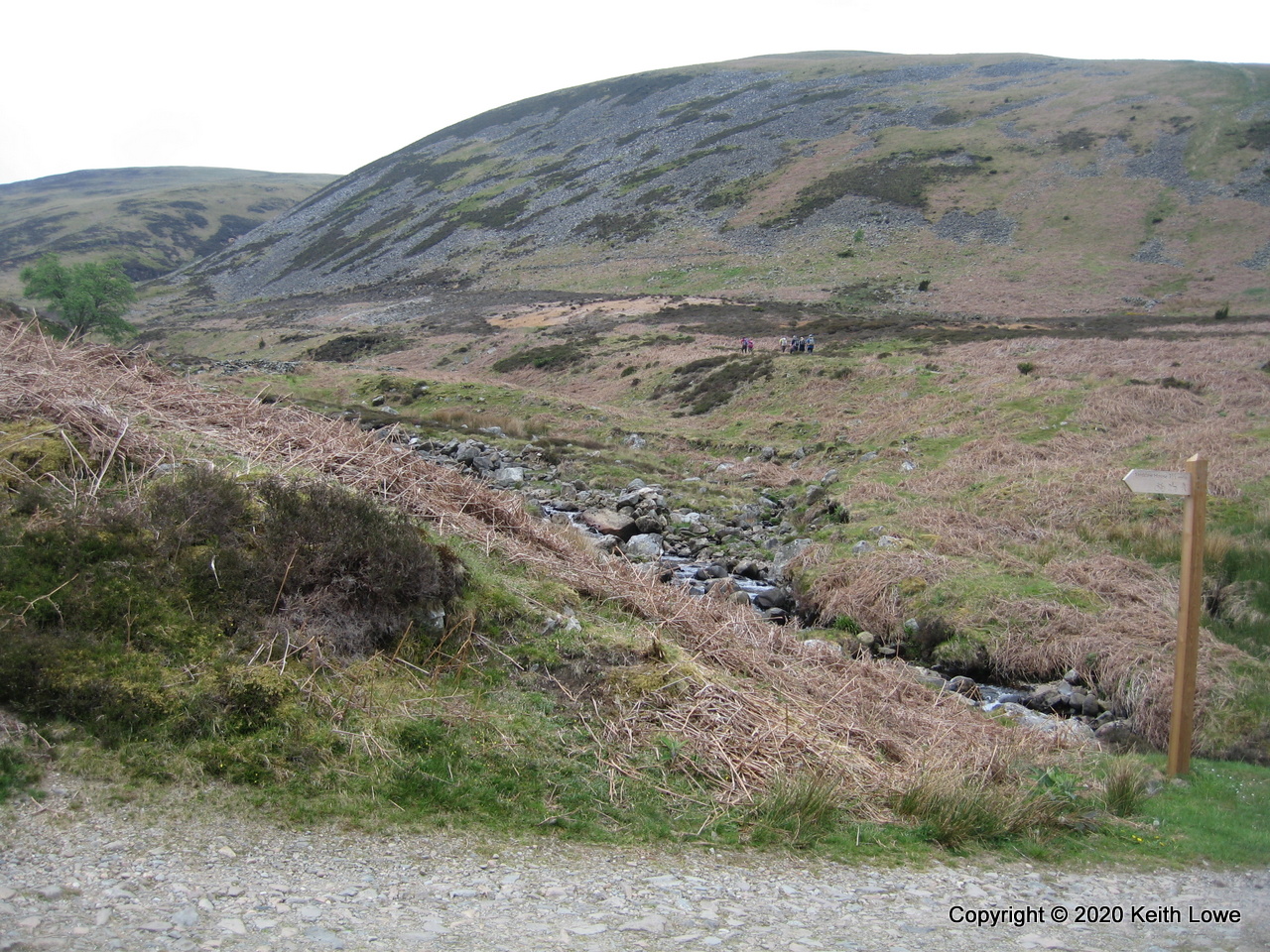 Here we stopped for lunch before the climb. At the same time we saw small groups of walkers from Mosedale heading towards the old mine workings and spoil heaps. The route follows Grainsgill Beck upstream, becoming steep and partially boggy in places and the path seem to disappear so you have to tread carefully as there are very few signs. All you can see are worn tracks, which act as markers that have been made by previous walkers.

We reached a boggy area near the top and in the distance was Lingy Hut where we knew we could rest. Finding a path through the bog was tricky until we arrived on the solid track

leading up to Lingy Mountain Rescue Hut at 600m. This is a building with a few minimal essentials inside including candles and decking to sleep on should you need to stay the night. Oh, and a guest book for you to sign. 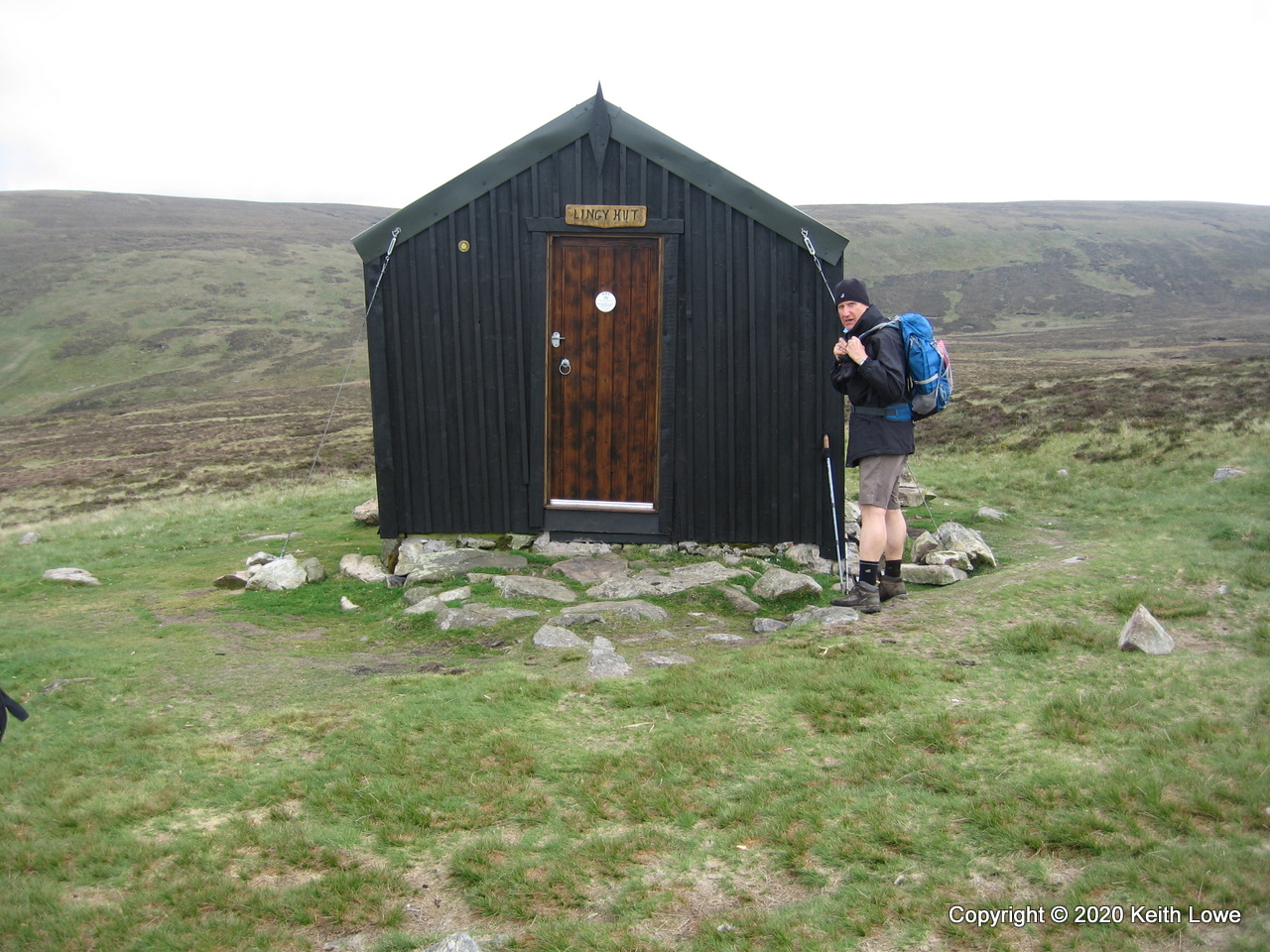 We went inside for a break 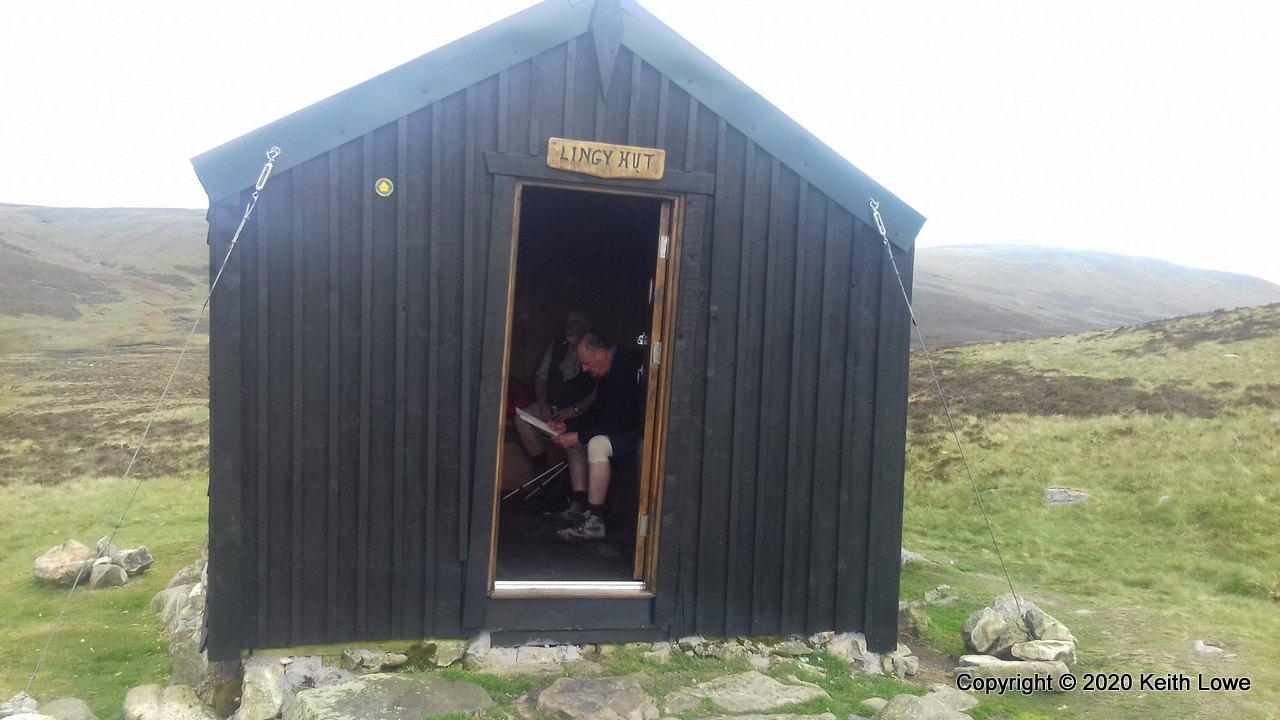 and a look around after our climb up. The bothy looks like it had been replaced as the outside seemed new with steel wire ropes holding it down because it is so exposed.

Leaving the hut secure, we headed off to find High Pike 658m/2158ft, the last and the highest point of the Cumbria Way. Our view was clear, we could see the path leading to the summit. It was now getting colder so we donned our jackets and continued to the top. As we arrived there was a couple sitting on the stone bench. 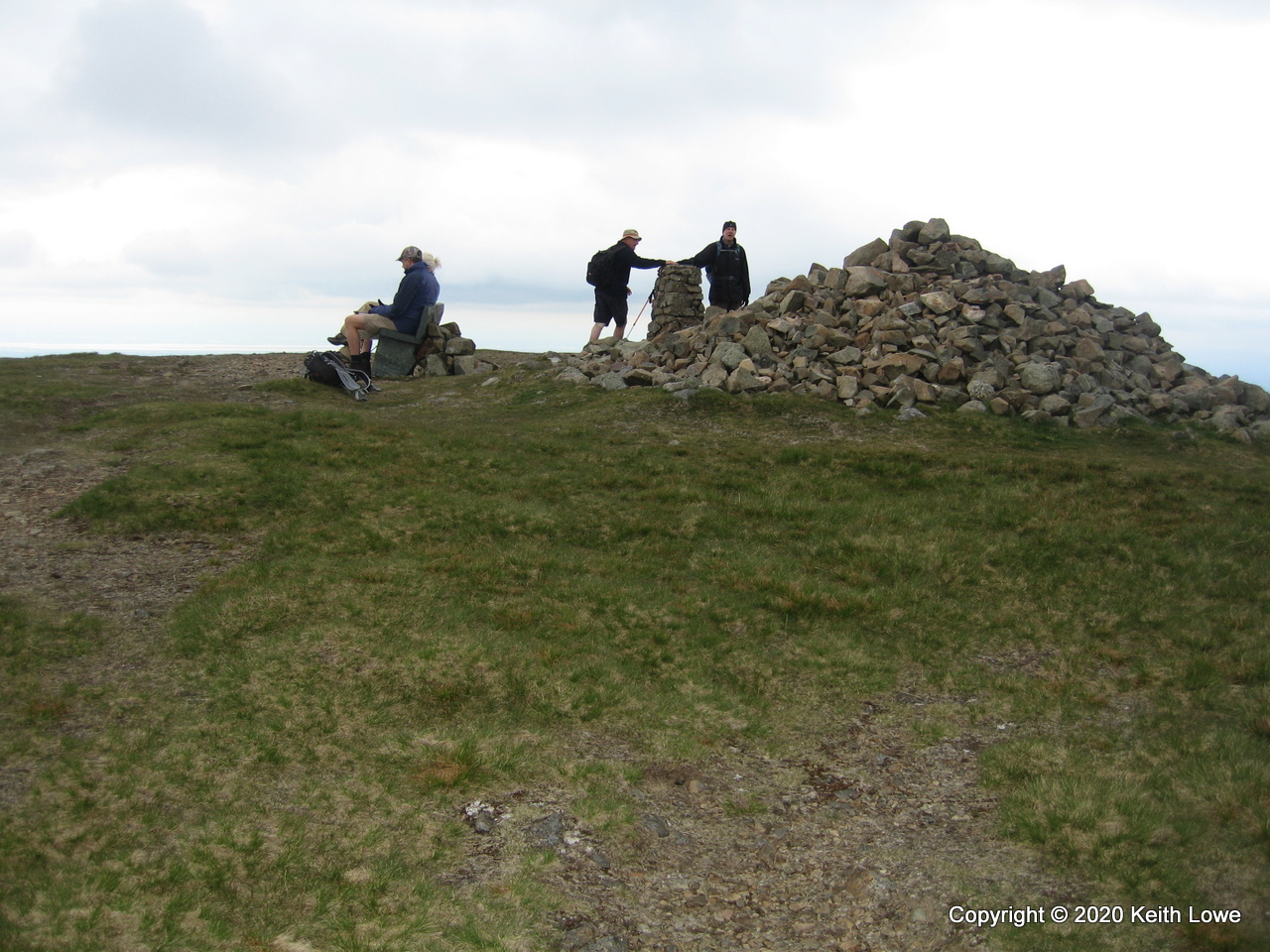 They seemed lost in their own world, even when we walked past them there was no acknowledgement whatsoever.

Despite the weather being cold and a slight mist in the distance, we had fantastic views. We could look back towards the Lake District, Skiddaw and as far as Yorkshire and the Vale of Eden in one direction with the Solway Firth in the other direction.

On the other side of the trig point were three youngsters taking pictures of their dog. We started to take achievement photos and accepted the offer made by one of the youngsters to take our group picture. 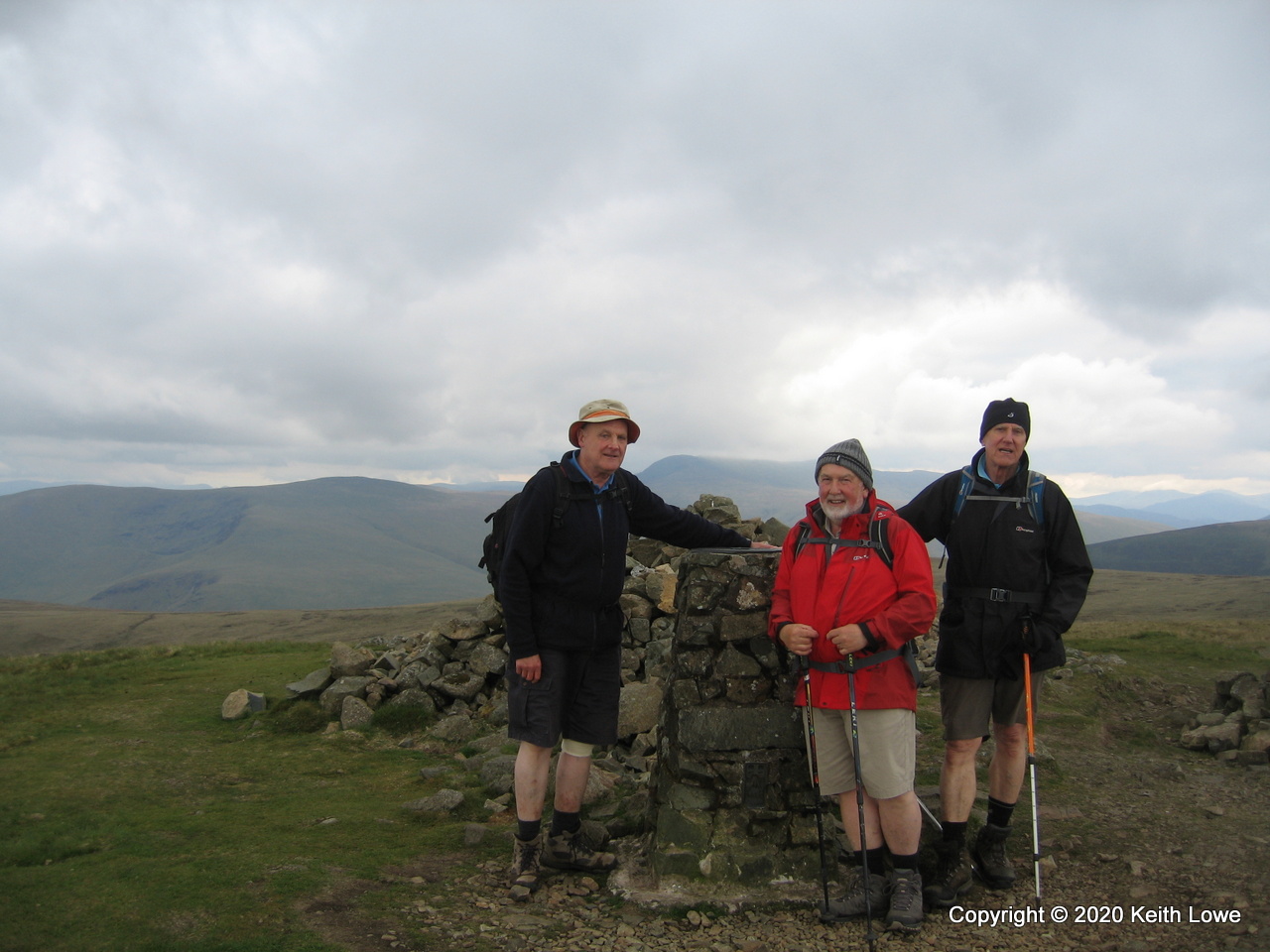 With a brief chat we were soon off down towards Nether Row. The descent was featureless with nothing to aim for by way of direction.

We walked on till we came across a clump of old stone which, apparently, was an old building years ago. We continued on down, then in the distance we could see a well defined and well worn path, which we headed towards. On our way we saw the two walkers going along the path so we aimed for them. We noticed a fenced off area which, according to our guide book, is an old mine shaft, so we avoided it and were now looking for the two walkers ahead; we could see them approaching a farm and a small village.

We eventually came to Clay Bottom Farm and Nether Row but the signs seem to have disappeared, the only guidance we could see were worn down / well trodden tracks. We followed what we thought was a path, but this led us into a field full of cattle. After twenty minutes of walking in long grass, and avoiding the cattle following us, we looked around for any further signs, but there were none, so we back tracked and aimed for nearby houses at the end of the village.

Some children were leaning out, watching us from a bedroom window and as we arrived near their house we asked which was the way to Caldbeck. They didn’t know but said they would send their father out to talk to us. It was a little embarrassing for intrepid explorers like us who have scaled mountains in Wales, trekked in remote areas of Scotland and walked the Camino Way in Spain, yet here we were having to ask directions to a village some two miles away!!!

Dad appeared and told us the sign posts had disappeared over the years; he seemed to be used to helping walkers as his instructions were effortless.

He was very pleasant chap, giving detailed directions of various junctions on the country roads. Now understanding where we were going, we said our goodbyes and thanked everyone.

We had a further two miles to walk, this time along quiet country roads, till we eventually arrived in Caldbeck village. We had been advised by the tour operators to contact the B&B as it was a working farm, some way outside of the village and we would need to be collected.

We phoned the landlady who suggested that, as it was late and restaurants would possibly be busy, we should go to eat first. She recommended the local pub as this was the place used by walkers on the Cumbria Way, then to phone her when we were ready.

Without hesitation, and being drawn by the smell of hops and food, we found the pub. It was busy, but we were able to get a table.

Whilst we were enjoying a refreshing drink, and reading the menu, Klemens went to the bar to pay his bill. Klemens & Valérie were just leaving, so a little banter was called for. Shortly after this David & Iain appeared and in conversation it appears they were the two walkers we followed off the hill. Whilst chatting with them we found they were staying at the same B&B. After a fabulous meal and a pint, we phoned our landlady who very kindly came to take us back to the house/farm where we were shown our rooms in the annexe building. We settled in, showered and had a good night’s sleep.