This morning we left the annexe and crossed the drive to the main house where ‘Nan’, as our host likes to be called, invited us to sit in the lounge. As we entered the room she asked what we would like for breakfast.

The smell of early morning breakfast cooking is always a good appetiser before eating. As we sat looking out of a huge window across fields, the sky was very grey and overcast. We heard over the radio that the forecast was for showers during the day.

Whilst we were having our cereal David & Iain appeared for their breakfast. Nan brought in our breakfasts, offering more tea; she appeared to be the only one working as we didn’t hear anyone else in the house. We ate quietly, just like the house was quiet except for a radio in the kitchen, with only the occasional comment from each other.

Nan gave us directions back to the village where we would meet the Cumbrian Way path again. We said our goodbyes to our host and the others, then headed back to the annexe. After sorting out what to wear, with the possibility of getting wet, we were soon ready to go.

We set off across the road and a small bridge, as Nan had described. We found the path leading in the direction of Caldbeck village and turned right. We were now walking alongside Whelpo Beck, 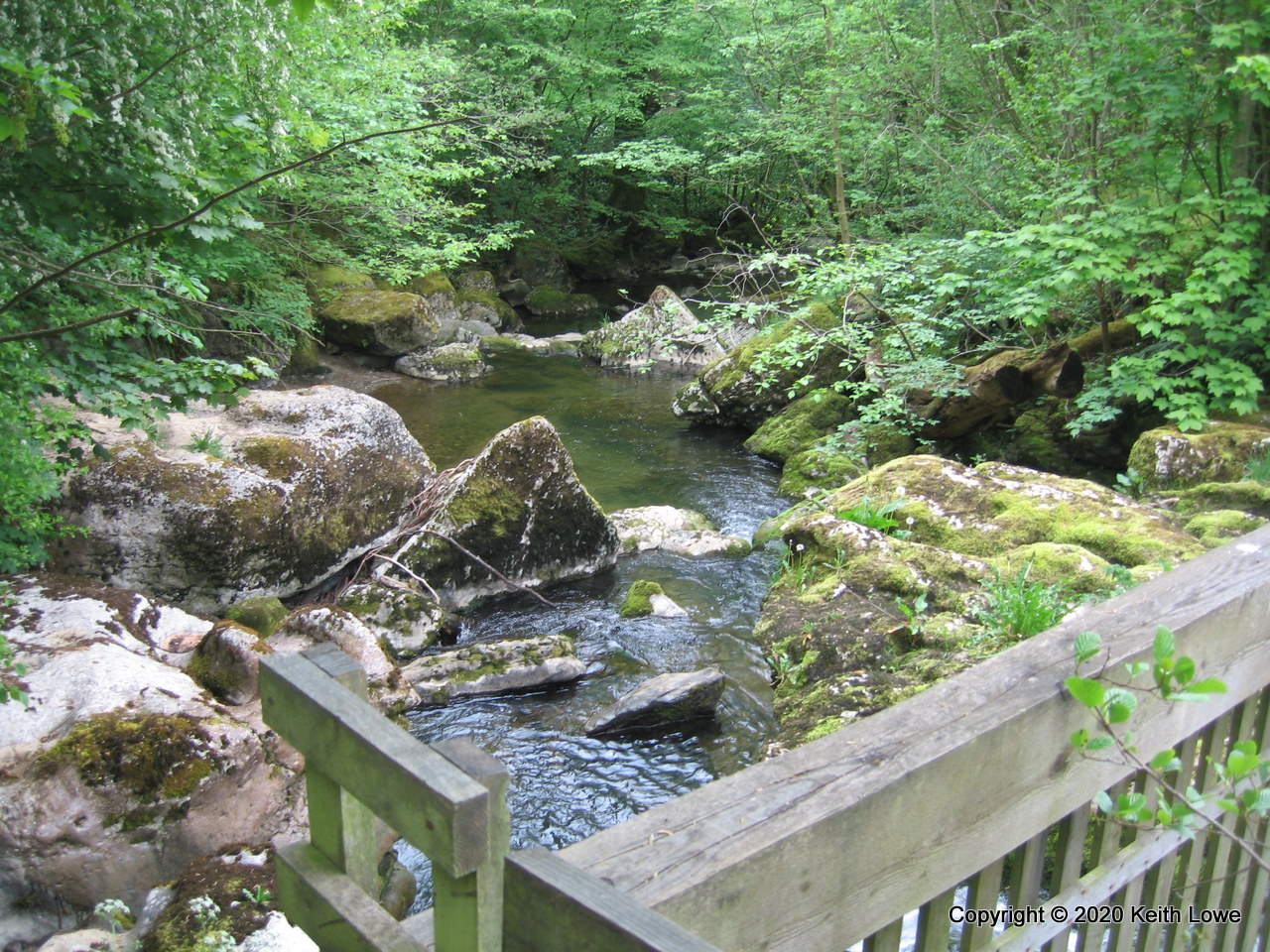 which flows through fields and woods. Passing a collection of waterfalls, to our surprise, we came across a derelict building with just its outer walls still standing and the stream roaring beneath it. The Howk Bobbin Mill was in use from 1857 until 1924 and once had the largest (or second largest, depending upon which guide book you read) waterwheel in the country, at 3 feet wide and 42 feet diameter in diameter.We continued along the path for about a mile still following Whelpo Beck, which becomes Cald Beck on the approach to the village.

Caldbeck, named after the river (Cold Beck) on which it stands used to provide the water for the industries in the area in the 17th and 18th centuries – such as woollen mills, bobbin mills, corn mills, a paper mill and a brewery. The village reflects this former industrial activity with many of the old mill buildings still in use today. There is also the local 12th century church with the resting place of the famous local huntsman, John Peel. “D’ ye ken John Peel?”

Our path led us past the ‘Oddfellows Arms’ 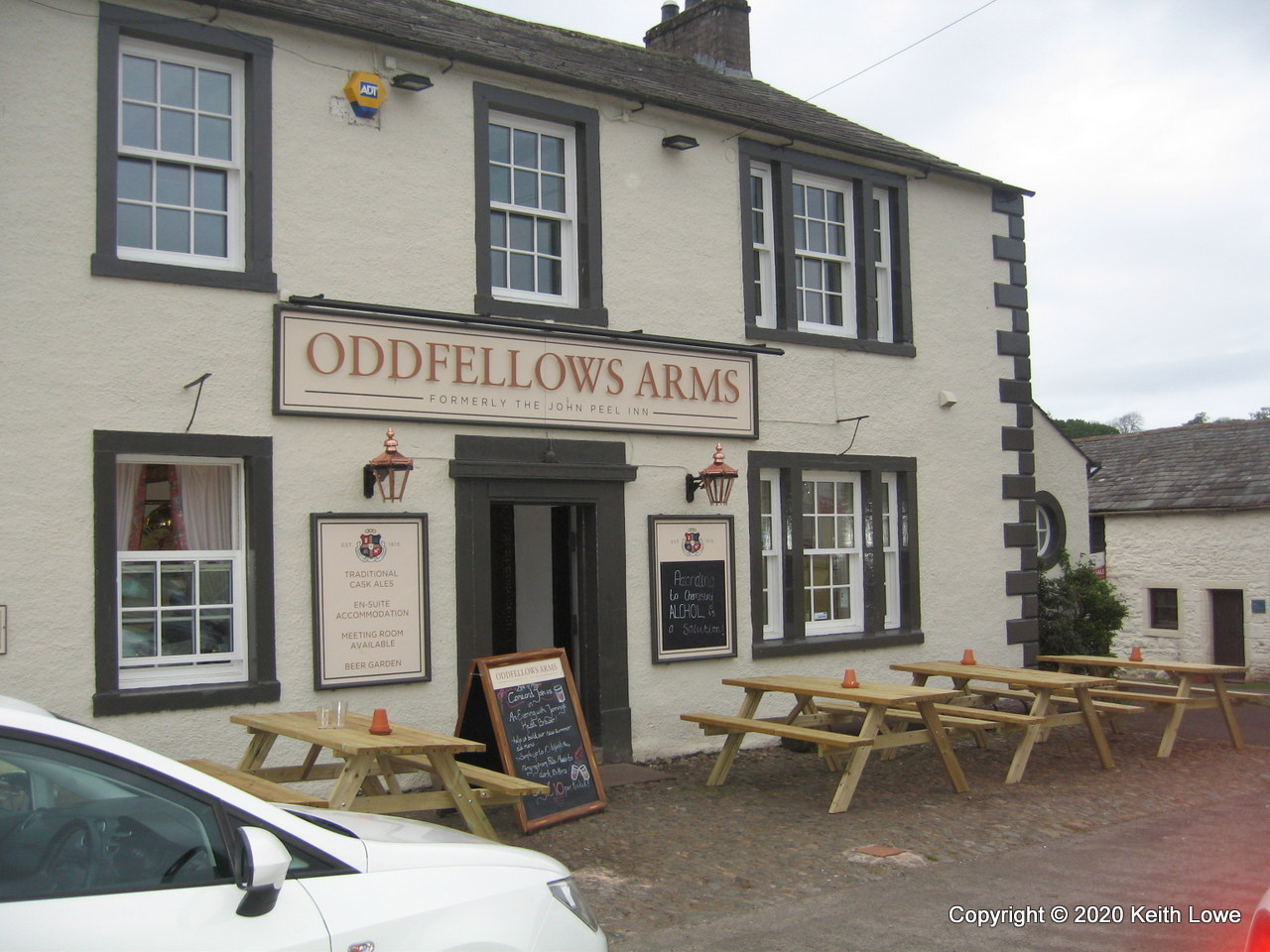 where we’d dined the previous evening and I remembered walking this part of the route seven years ago. We crossed the river and on turning right, there was the B&B we’d stayed in the last time we here; nothing had changed.

We followed the path signposted ‘Sebergham’ and were now sadly leaving the Lake District National Park. We walked past a new campsite at the edge of the village; it looked new because everything was clean and tidy. The path then led to a small sewage works, luckily there were no smells.

The route went into the woods and we started to climb on a broad path in Parson’s Park. 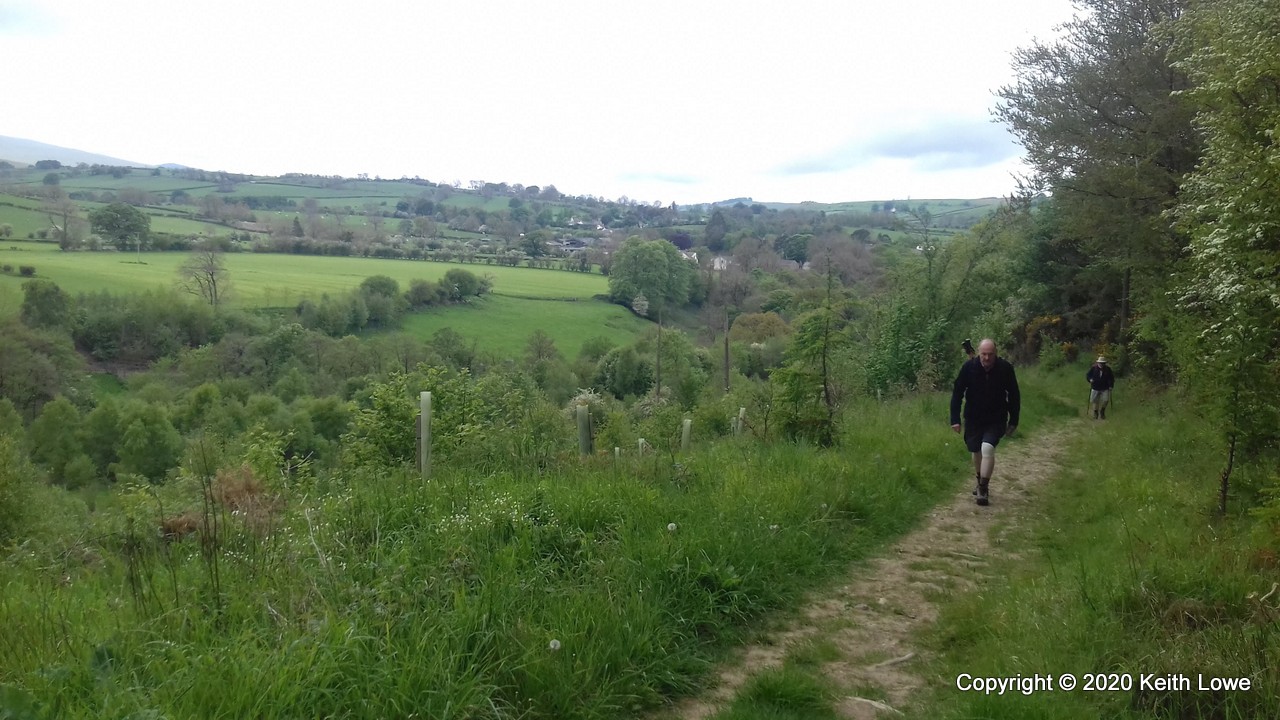 As we got higher we could see between the tree tops and across the fields to High Pike and Carrack Fells, where we were yesterday. 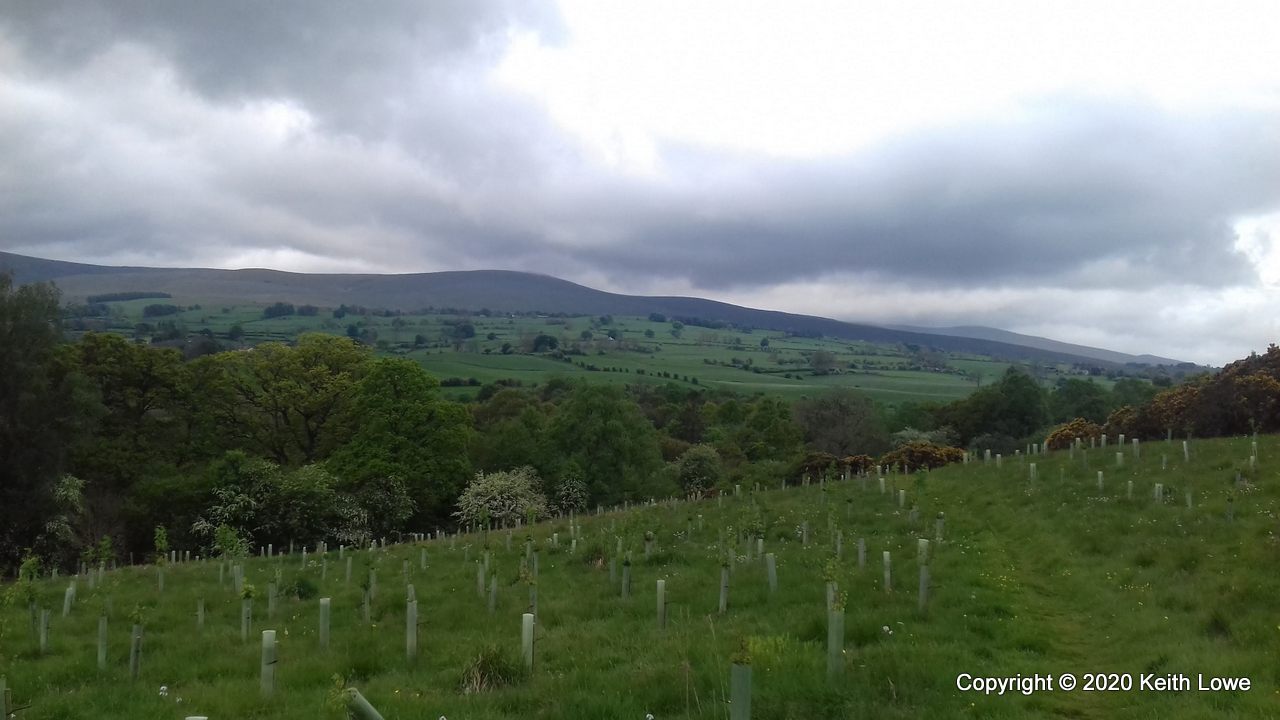 We continued along the undulating path, climbing the occasional stile to work our way back down to the river from Oakbank Hill. We were heading through Dentside Wood until we arrived at a road where we crossed over Sebergham Bridge and the River Caldew, taking care with the approaching traffic. The route took us alongside a few houses before having to climb through an overgrown area to reach a narrow road leading to St Mary’s Church. We turned left along a wide track heading to Bell Bridge, passing Sebergham Hall.

We entered another field leading to Bell Bridge and were now following the River Caldew again for some two and half miles, crossing small bridges and stiles until we arrived at the three-arched Rose Bridge. We met two ladies and a child strolling along the river and chatted about the area, asking their advice about tea rooms.The only tea room they knew was in Dalston, where we were heading. We said our goodbyes and crossed the road, using stone steps and kissing gates. To our left we could see Rose Castle in the distance.

A bishop had this residence built in 1230; it was destroyed several times over the years and rebuilt. It became known as Rose Castle from 1355 and became the home of successive Bishops of Carlisle. The building suffered enormously during the Civil War and was used by the RAF during WWII. In 2009 it ceased to be the Bishop’s residence.

As we descended more steps and a kissing gate to rejoin the path alongside the river, two lady walkers came by. When we asked where they were heading they said they were walking the Cumbria Way from Carlisle to Ulverston (north to south) but hadn’t long started their walk. We wished them luck and continued on our way. After a while, at an unmarked junction, we carried on for a short distance but then had to double back to the junction and turn left away from the river on to a bridleway walking to Holm Hill, till we eventually crossed the access road for Lime House School. 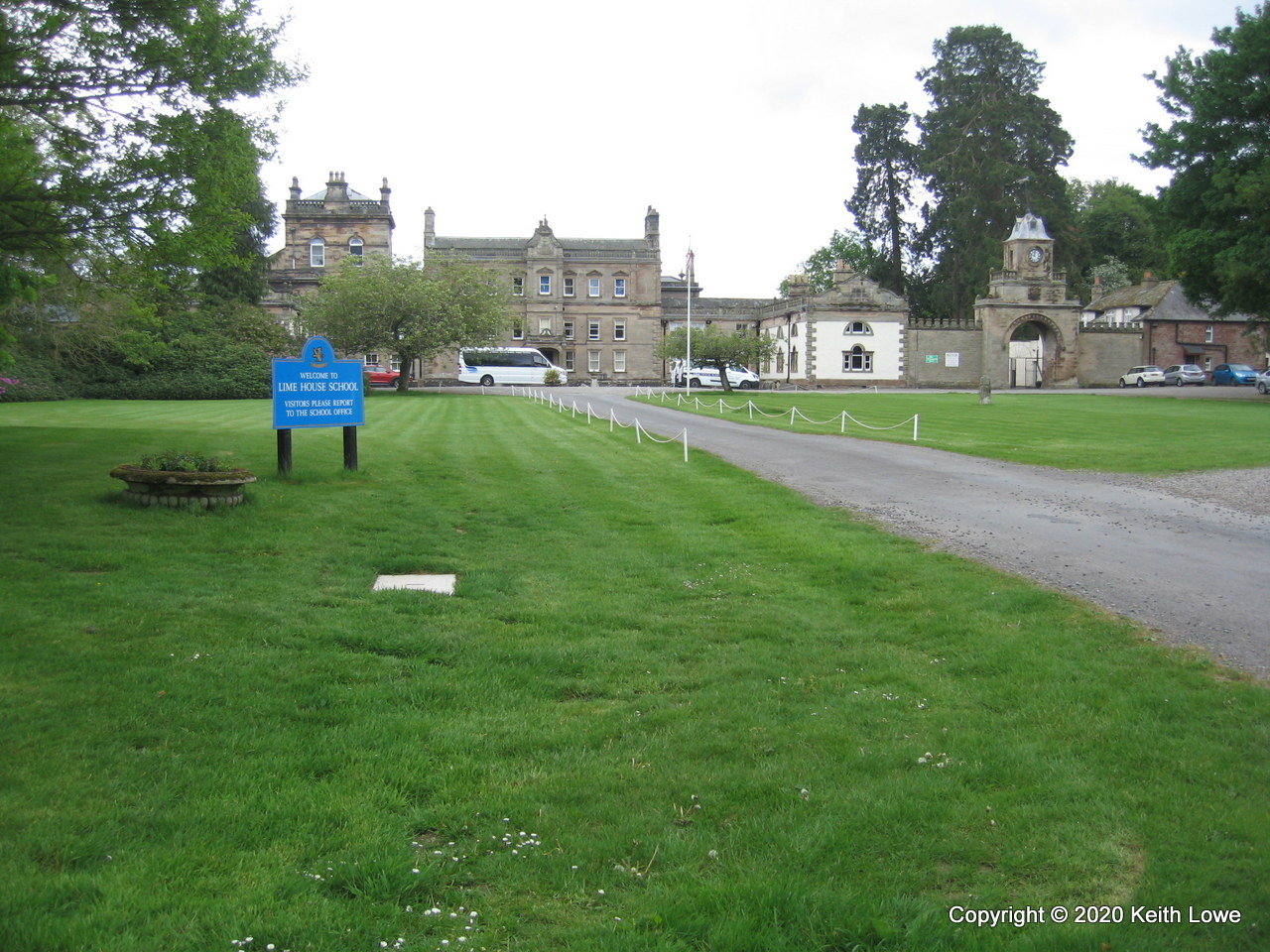 Still following the path, and going through the different gates, we arrived at a few houses and the busy B5299 road.

We walked downhill to the junction with the Bridge End Inn on a bend and followed the turning to the left, instead of crossing the road and river again. We knew the road led us into Dalston and ran parallel to the river, so we decided it was easier on our tired legs to walk along the pavement to the village.

We eventually arrived in Dalston only to find most places were closed, it was Sunday! We walked on to the local pub to find the café next door was open, luck was on our side. It was a little cool and windy but we sat outside as we were quite warm from the walking. We ordered lunch from the café and as we were waiting patiently, David & Iain arrived with their families.

They were finishing the walk in Dalston and had arranged to be collected as they were travelling back home to Scotland from here. After a brief chat they went inside to eat.

Our meal arrived, and a hearty one it was too! After lunch the two David, Iain and families were leaving and saying goodbye when, from nowhere, the Klemens & Valérie appeared. After much banter, a group photographs 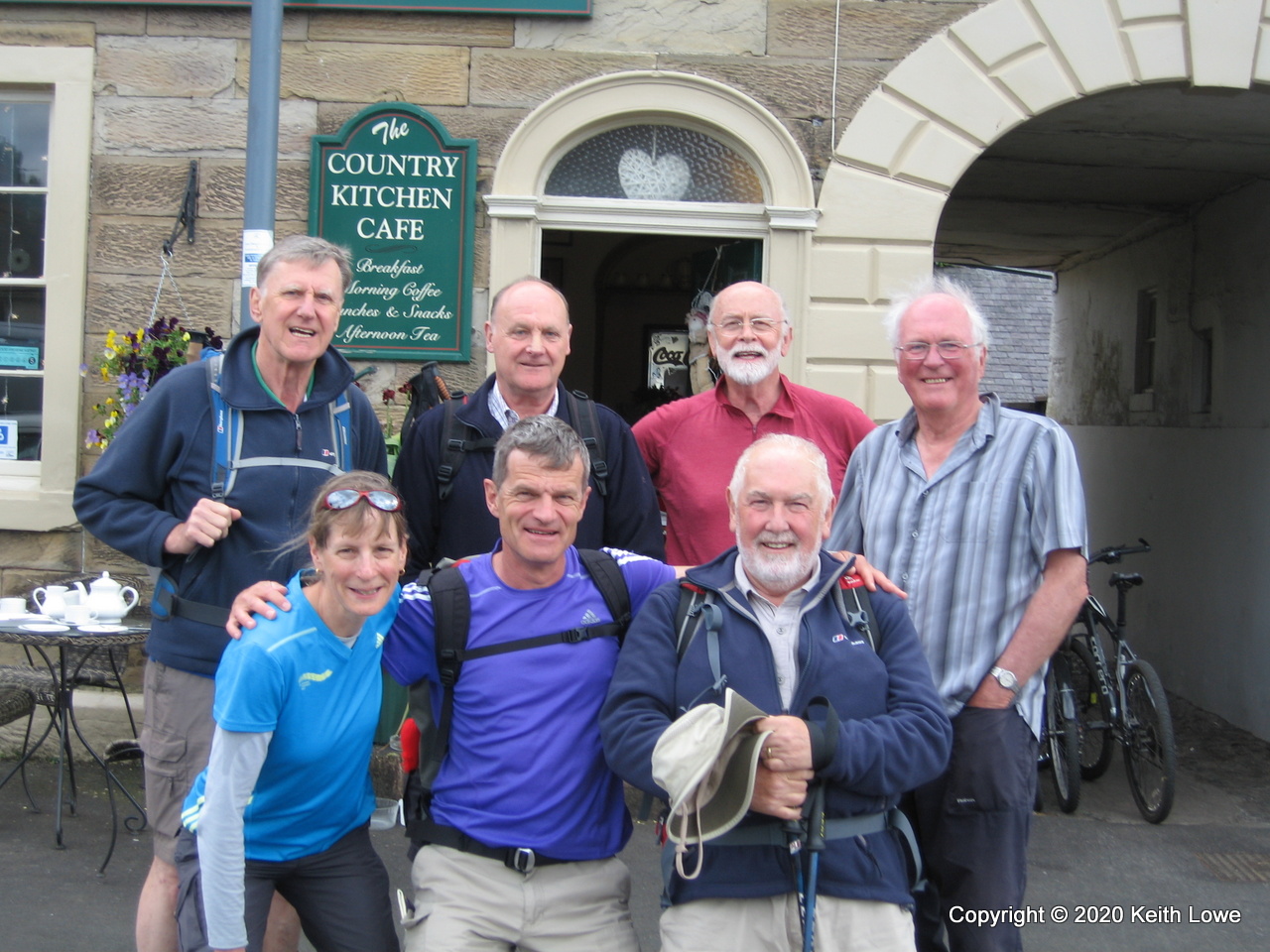 and exchange of email addresses, it was finally time to say farewell again to the two families heading for Scotland. They passed us with hands waving from the car and a cheer before disappearing northwards.

We now headed towards our final section and last 5.5 miles. We followed Klemens& Valérie who were younger, quicker and most probably fitter than us. We tailed them until they disappeared from view within minutes, but no problem as I remembered the route. The path now was the Caldew Cycleway, a tarmac route for cyclists and pedestrians all the way to Carlisle. Although very easy under foot you have to have your wits about you as many cyclists coming from behind don’t ring their bell. It’s a little scary when one suddenly appears, making you jump aside, sometimes into their path. Maybe it’s not PC or they just can’t be bothered.

Anyway, along the path we trod, passing a large Nestlés factory. The path meanders for just over a mile between the railway line from Carlisle and the River Caldew. As we walked, a small group of cyclists, (in their mid-forties/fifties) came towards us with a friendly nod and hello, passing with care. Later, as we neared Carlisle, the same group appeared and as they passed one seemed a little unsteady. When they were some distance, a lady of one couple riding side by side was leaning towards her partner who seemed to be helping her stay upright. Unfortunately, as they stopped, the lady leaned too far and they both ended up on the floor, probably rather embarrassed as they saw us walking towards them. As we went by them still on the ground, smiling and avoiding eye contact we asked if anyone was injured. Both were okay so we carried on.

We were now closer to Carlisle. The sun began to shine and the temperature was getting warmer than when we’d set out this morning.

Passing under a railway bridge where the River Caldew drifts away to the right for a short while, we came to a factory in Cummersdale. We followed the path leading to a grassy area known as Cummersdale Holmes.

The path now stayed close to the river while the cycleway also left us. We walked towards a fence and new houses, turning right at the fence and following closely alongside the river until we reached the weir. 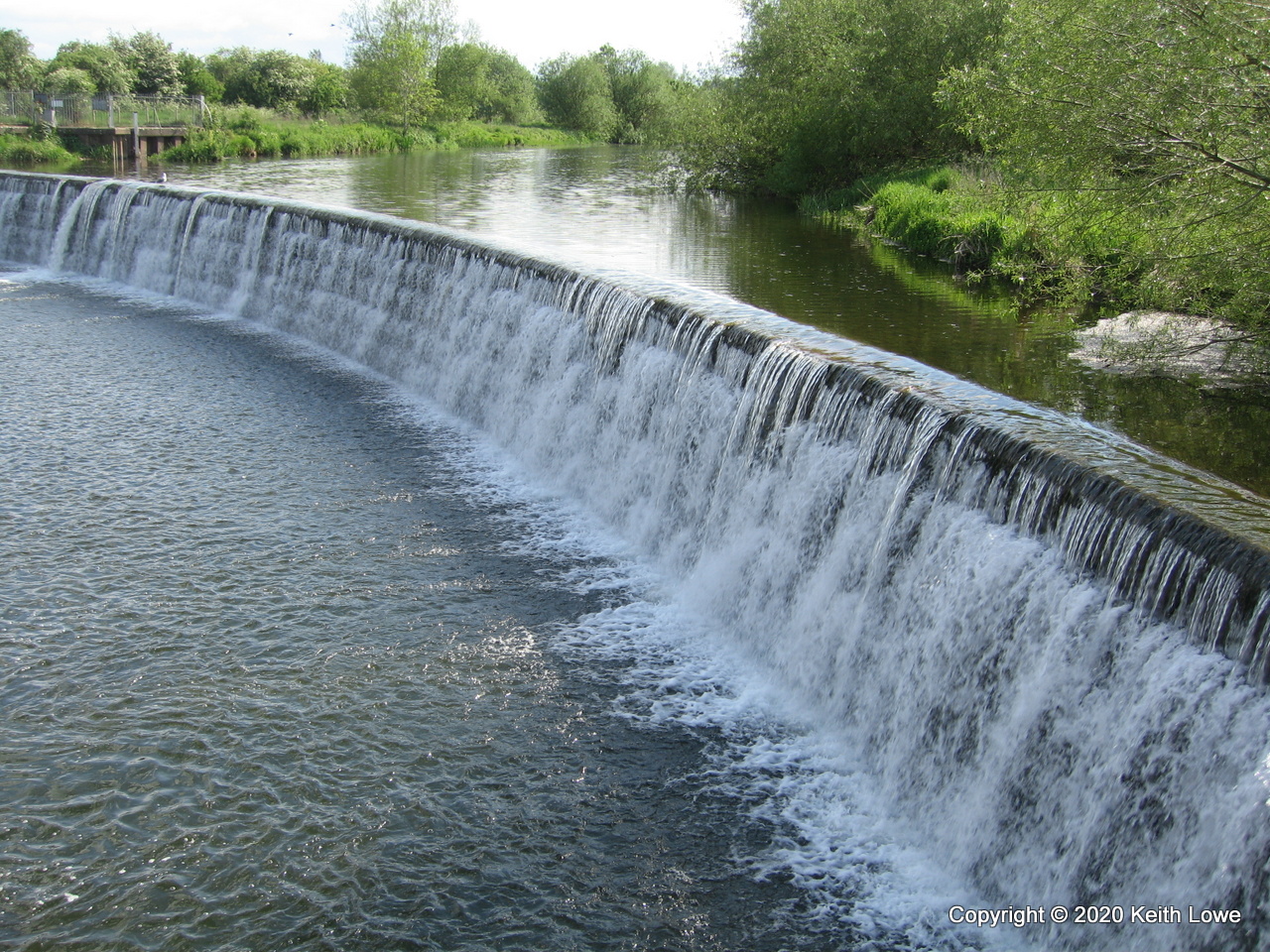 Ahead we could hear the bustle of the city. The path now was well signposted, passing new houses and old mill conversions, factories and new flood barriers. We crossed another bridge over the River Caldew for the final time and headed up the hill to Castle Way and Carlisle Castle, 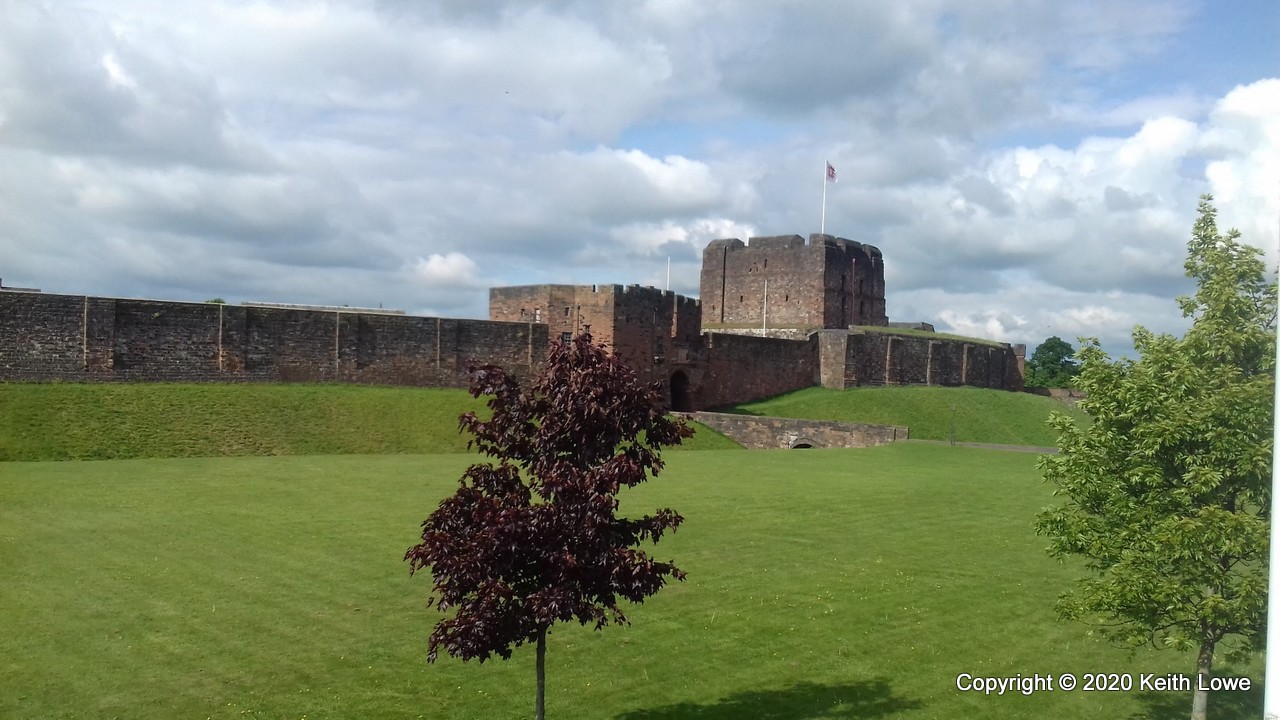 our finishing point. Here, at the castle, we had our official photograph 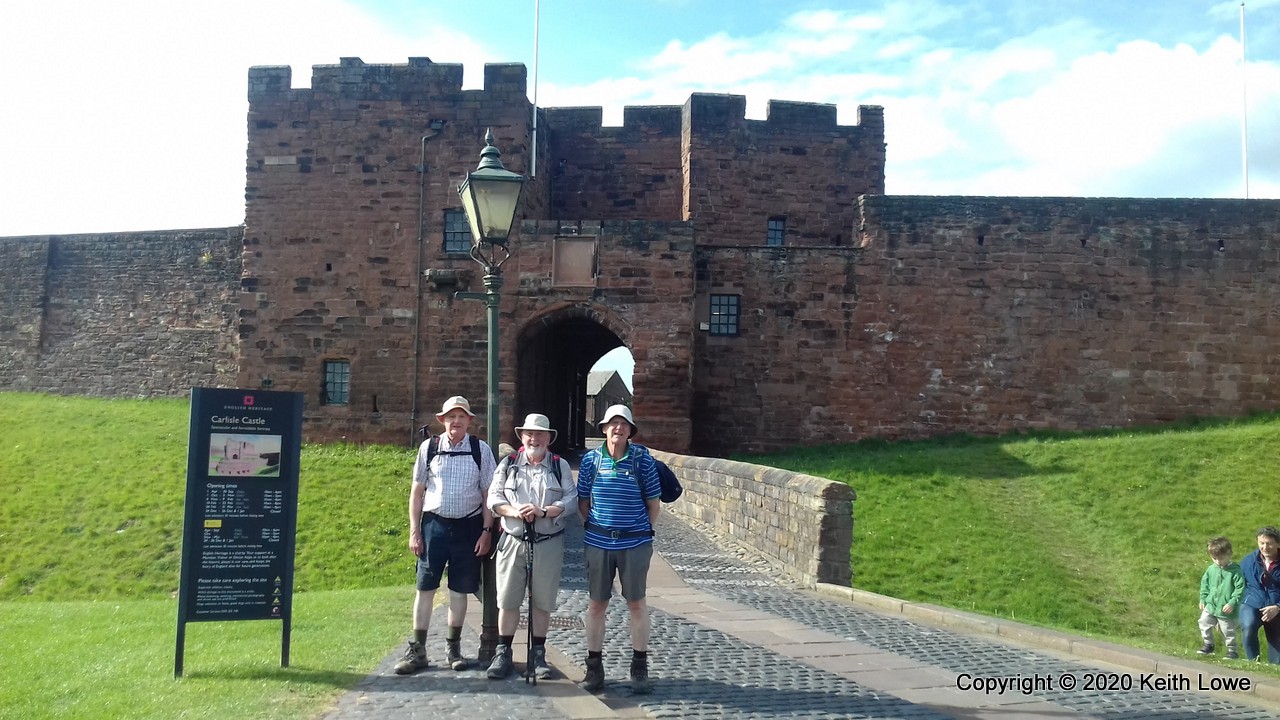 taken by a passerby before heading off to find our last B&B.

Since doing this walk in 2012 when the official end of the Cumbria Way was the castle, a new official finish point is the Tourist Information Centre in the centre of the city. We finished our walk on Sunday at 5 pm; I don’t think we would have reached the TIC in time to sign any visitor’s book to record that we had completed the walk, so our end was still Carlisle Castle.

We set off to find our accommodation which turned out to be a further twenty minutes walk away from the city.

We booked in and the landlady was very helpful. We asked where we could have an Italian meal, our tradition at the end of a walk. Not only did she recommend a place, she also booked us a table and a taxi. What could be more comforting? We headed off to our rooms and met in the pub across the road later for a well-deserved celebratory drink. After this, we went back to the B&B to shower and change our clothes.

The taxi was prompt and we were soon at the restaurant which was quiet with only a few people eating. Our meal was plentiful and very tasty. It was then time to order a return taxi to our lodgings, ready for a good night’s sleep.